A few years ago, I was asked to test a pair of La Sportiva Karakorum boots. They’re cool-looking boots, but they struck me at first as almost too rugged for ordinary hiking. I wondered what use I could put them to in the Adirondacks. Then it hit me: slide climbing.

La Sportiva bills the Karakorums as lightweight mountaineering boots, and that makes them ideal for scrambling up the rock slide paths that scar many of our High Peaks. 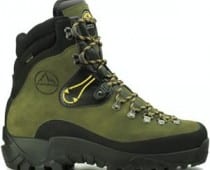 The Karakorums also are great for hiking on Adirondack trails in early spring, when you’re likely to encounter mud, snow, ice, you name it. The boots are waterproof, and their stiff soles can accommodate crampons.

I have worn the Karakorums on a number of hikes, but the three that stick out are my ascents of the Eagle Slide on Giant Mountain, the Placid Slide on Whiteface Mountain, and the Trap Dike on Mount Colden (followed by a descent of Colden’s Southeast Slide). These were tough, all-day hikes, but at the end of each one, my feet still felt comfortable.

Experienced climbers know the approach is often harder than the ascent of the slide itself. If you don’t believe it, click here to read the account in the Adirondack Explorer of my ascent of the Placid Slide. We bushwhacked for a few hours up a streambed, hopping from one slippery rock to another.

The Karakorums truly excelled on the gnarly approaches. The Vibram soles gripped the stone, the stiff cuffs offered support on uncertain terrain, and the leather/rubber exterior kept my feet bone dry despite lots of walking in the water.

The Trap Dike is easier to get to than either slide, but it’s a more difficult climb—a class 4 in the Yosemite Decimal System. It involves ascending two waterfalls in a narrow chasm. Again, the Karakorums were perfect for this terrain. Some people may want to bring rock-climbing shoes for the steep new slide near the end of the dike. Likewise, I usually switch to climbing shoes for the Eagle as well.

The Karakorums do have a place in the Adirondacks, but I wouldn’t say they are useful only for slides and stream bushwhacks. They’d also be great for arduous backpacking trips where you are hiking long distances with a heavy pack.