Home » Stories » Life on the slide 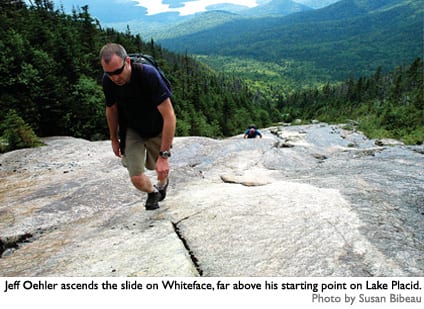 The paddle across Lake Placid and the ascent of Whiteface is a classic Adirondack trip.

I’ve been here before, so I know we’ll get out of this mess eventually, but I suspect Sue and Jeff are starting to have doubts. They are unfamiliar with Slide Time.

We’ve been bushwhacking for more than an hour up Whiteface Brook in search of the long slide on the southwest face side of Whiteface Mountain—the very scar, visible from Lake Placid, that gives the peak its name.

Since we need to follow the brook only a mile or so, you’d think we would have reached the slide by now. But our progress is measured in dribs and drabs.

Hop to the next rock, grab a branch, pull yourself onto the bank, climb over a fallen tree, return to the stream, and wedging your boot against a boulder, step up and over one of the small cascades you encounter every ten yards.

An hour of this might seem like forever, but this is Slide Time. Climbing an Adirondack slide—one of those streaks of bedrock on many of the High Peaks—usually requires an arduous bushwhack, often up a streambed. When I first started climbing slides, I would tell myself well into the bushwhack, “I must be getting close.” But I never was. In Slide Time, you’re never close to your destination.

And so I hesitate to tell Sue and Jeff that we are almost there, though I sense they want this bushwhack to end. They long ago gave up trying to keep their feet dry. Now they march through the water, sometimes up to their knees. The most I can do is reassure them that we are on the right track. I ask what they think of the adventure so far.

“It puts the whack in bushwhacking,” Jeff remarks.

“I wouldn’t recommend it to our readers, just because of the danger,” Sue adds. “It’s a cool way to hike, though.”

OK, I won’t recommend it to our readers—except those who enjoy a good thrashing. As a matter of fact, this adventure is a variation on a classic-hike trip that requires no off-trail travel or masochistic tendencies. 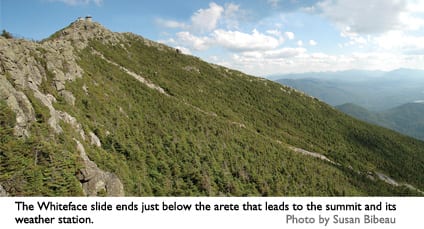 So let’s start over. We begin the day at the state boat launch on Lake Placid. The water is calm—ideal for paddling the four miles to Whiteface Landing, where we plan to pick up the trail that leads to the 4,877-foot summit. Jeff Oehler and I will share a big aluminum canoe. Sue Bibeau, who is married to Jeff, will paddle a solo canoe so she can take photographs more easily.

Once on the water, we’re disappointed that Whiteface’s upper slopes are wrapped in cloud. We had hoped to get a good look at the slide as we paddled across the lake. Still, we find much to keep our eyeballs enthralled: the homes and boathouses of the lake’s affluent summer residents, the more humble abode of an osprey on Moose Island, the cliff called Pulpit Rock, the loon diving for fish, and the long ridgeline running from Moose Mountain to McKenzie Mountain (which I happened to have hiked the previous weekend).

In an hour, we arrive at the small dock at Whiteface Landing, located on Barrel Bay at the northeast corner of the lake. “Should we use the paddles for hiking sticks?” Jeff asks as we clamber onto dry land.

We stash the canoes (and paddles) on shore and start up the trail. In a minute, we come to a register at the junction with the trail from Connery Pond. (The hike from the pond to here is two and half miles.) A sign says it’s three miles from here to the summit, but that underestimates the distance by nearly a half-mile.

At the outset, the trail follows an old woods road. It’s straight and smooth, with young hardwoods growing on either side. At 0.6 miles, the trail takes a sharp right, following a new route completed a few years ago. The old trail crossed Whiteface Brook three times on its way to a lean-to about a mile from the lake.

As a result of the rerouting, it now crosses the brook only once.

We soon discover that the new route has problems of its own: mud wallows where we sink up to our ankles.

The trail remains nearly level all the way to the lean-to, where it rejoins the old route and begins climbing above the brook. Here, the forest has matured and is quite attractive. As the trail ascends, the hardwoods give way to red spruce and balsam fir.

About two miles from the lake, the trail veers to the right, away from the brook. If you want to climb the slide, you should begin bushwhacking here or not long after this point. The idea is to hike parallel to the stream until you find a good spot to drop down to the bed and then follow the stream to the base of the slide.

The last mile of the hiking trail is quite steep and often eroded, with lots of rocks and bare slabs. Coming down is harder than going up. Well before the

summit, the trail emerges from the woods and offers spectacular views of the High Peaks, Lake Placid, the Champlain Valley, and numerous other peaks and water bodies. All this is just a preview of what you can see from the top. 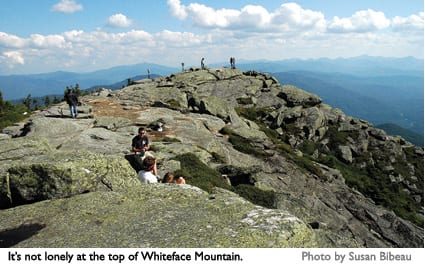 Had we enough sense to stick to the trail, we would have reached the summit less than three hours after leaving Whiteface Landing, in time for a late lunch. By way of the slide, the climb takes us about five hours.

We get to the slide’s lower slabs about 1:30—two and a half hours from the lake. Alas, they’re too wet and steep to climb, so we pull ourselves up by the trees on the edge. This takes time. When we reach rock that is reasonably dry,

it’s already past 2 o’clock. We decide to take a lunch break.

Here’s another thing about slides: The obstacles on the approach—boulders, downed trees, waterfalls—consume so much of your attention that you hardly realize you are climbing the whole time. Gravity is the least of your problems.

And so as we sit down to eat, we are amazed by the view suddenly spread before us: Lake Placid far below and mountains stretching to the horizon.

Later, as we climb higher, the views only get better, and we gobble them up whenever we turn around, which is often.

The scenery, of course, is one of the rewards of climbing a slide. Another is solitude. I’ve climbed more than twenty slides, many more than once, and I struggle to recall a single instance when I’ve encountered another party. 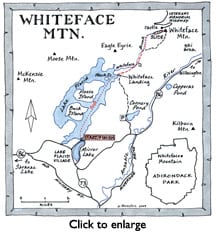 come across surprising examples of beauty on every slide: fingers of quartz in the bedrock, tufts of grasses wafting in the wind, or wildflowers clinging to a bit of earth (such as mountain sandwort on the Whiteface slide).

The slide, which is more than a half-mile long, varies in difficulty. We use our hands and feet to scramble up the steep bits, but after the lower sections, the

slide is rarely more than a calf-burning walk. We’re on smooth slab most of the way, but toward the end we encounter loose rubble.

As we near the end of the slide, we discover we are something of an attraction ourselves. Tourists who drove up the Whiteface Veterans Memorial Highway are gawking at us from the short trail that climbs the arête from the parking area to the summit. We know we’re re-entering civilization when Jeff finds an empty Sprite bottle.

We slip through the iron fence and join the horde on the way to the top, where we take in the 360-degree views. Now we’re tourists, too. We pose for snapshots near the summit sign, ride the elevator down to the parking area, and order cold drinks in the restaurant inside the Castle, a massive stone building that also houses a gift shop and rest rooms.

Later, we follow the arête back to the summit and pick up the trail to Whiteface Landing. The first mile or so is rough going as the trail is steep and rocky. The descent eats up nearly two and a half hours. It’s 7:30 p.m. when we reach the lake. We slip our boats into the water just as the sun begins to set behind Moose Mountain.

The whole trip, including the paddles forth and back, took us ten and a half hours. But if you hike up the trail instead of the slide, you should be able to do it in much less time. Nevertheless, plan for a full day out.

One last thing: since Sue brought up the specter of danger, I should point out that I did get hurt on this trip. I slipped on a slab and landed on my butt. When I put out my hands to break the fall, I scrapped my palm and banged up my wrist.

By the way, this happened on the trail coming down. So watch out, hikers!