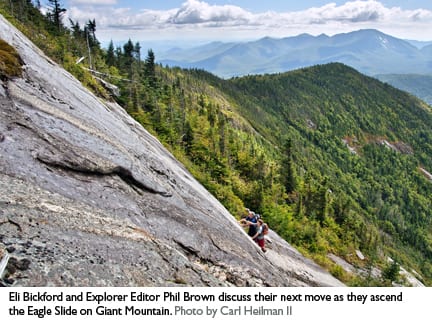 Perhaps you’ve heard of Richard Louv’s best-selling book Last Child in the Woods, in which he laments that modern kids grow up cut off from the natural world.

Makes you wonder who that last child in the woods will be.

I think I found him.

His name is Eli Bickford. He’s twelve years old. And he’s from Brooklyn.

Though he lives in the city, he spends every summer at his family’s cabin in Keene Valley. When he was seven, he climbed his first High Peak (Nippletop). The next summer he climbed ten more of the High Peaks. By age eleven, he had polished off all forty-six.

“Everything,” Eli says. “It’s so beautiful.”

This year, he undertook in earnest a new quest: climbing slides.

You can see slides on many of the High Peaks: they’re created when heavy rains wash soil and vegetation off steep slopes. These streaks of bedrock provide spectacular routes to the summits—rugged, wild, and scenic.

“It’s a whole different way to look at the mountains,” Eli explains.

As it happens, I had been thinking of writing a story on the Eagle Slide in the west cirque of Giant Mountain. The Eagle is one of the most beautiful slide climbs in the Adirondacks.

Given its steepness, it also is one of the most perilous. So I had reservations about inviting Eli along—until he told me he had already done it. 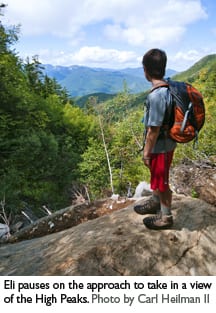 On the morning of our expedition, we meet at 9 o’clock at the Roaring Brook trailhead near St. Huberts. The photographer Carl Heilman soon joins us, and we set off, Eli leading the way at a superhuman pace. Fortunately, we get a chance for a breather when Eli stops to sign the register, twenty yards in.

“Maybe we should keep going, and he can catch up with us,” Carl remarks.

The first part of the hiking trail ascends through a beautiful hemlock forest and then, at just under a mile, crosses Roaring Brook. In previous outings, I approached the slide by bushwhacking up the brook from the crossing, but I have since learned that you can get to the brook by a herd path that starts higher up the main trail. It’s marked by a cairn about one and three-quarters miles from the register. 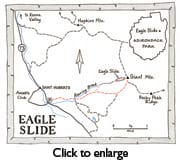 As we will discover, the herd path crosses the stream and leads through the woods for a good distance before circling back to the water. The path speeds our progress and spares us some strenuous bushwhacking, but Carl and I are ambivalent about this easier approach. Ascending the streambed used to be part of the adventure and heightened the anticipation of reaching the slide.

Of course, you can still bushwhack up the stream. If you want, you can bushwhack from the highway. But not many hikers will choose to bushwhack when a footpath is available.

The herd path passes two cairns that mark the start of side trails leading to other slides in the west cirque. We bear right at both junctions.

“Ewww!” Eli exclaims soon after we pass the first cairn, and he starts brushing himself off.

Eli tells us he’s having a wonderful summer. He goes hiking on most days, often on outings arranged by the Adirondack Trail Improvement Society. He also has been learning to rock climb. And he’s knocked off a half-dozen slides. We ask which one is his favorite.

“Probably the east slide on Colden,” he replies. “It’s so beautiful, especially when you get to the top. You have such a nice view.” 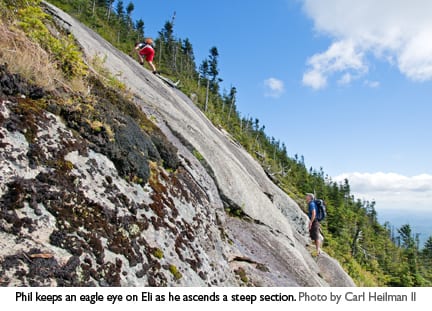 When we reach the stream again, we pause to admire a small brown frog sitting on a slab of bedrock. Both Carl and I take a number of photos, including some extreme close-ups. Remarkably, the frog doesn’t hop away. I suggest to Carl that he should ask it to sign a model release.

Finally, the frog leaves, and so do we. We scramble up loose rubble, return to the streambed, and pass a garage-size boulder. As we ascend, we turn frequently to take in the stunning views of the High Peaks to the west: the Dixes, Nippletop, Sawteeth, the Great Range, Big Slide, and many more—and all this merely a foretaste of things to come.

By this time, we are close to the base of the Eagle, and Eli starts to recognize landmarks, of sorts, from his previous trip. “I remember this,” he says as we reach a wet slab. “I went over there and sat on that mossy patch.”

Just over three miles from the highway, we reach a line of trees. Following a narrow path through a break, we find ourselves at the Eagle—the widest and most conspicuous slide in the cirque. From a distance, it resembles an eagle with wings outstretched. Our plan is to go up the center to a large boulder at the top, a climb of about 1,300 feet. 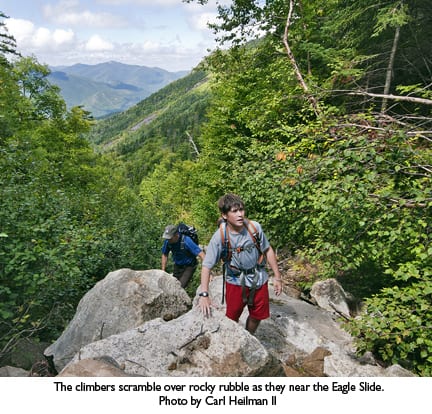 Looking up at the face, we can see that much of it is still wet from recent rains. We’ll have to wend our way up the dry portions and, where that isn’t possible, stick close to patches of vegetation.

Carl chooses to traverse to the left edge of the slide. He plans to photograph us from the side. Eli and I soon ascend about eighty feet. From a shrubby patch, I step onto a narrow ledge, about six inches wide, and move sideways to what appears to be dry rock. But it’s steep. After looking it over, I tell Eli we’ll find a safer route.

Before retreating, though, I decide to test the rock—goaded on by the imp inside me. I carefully climb twenty feet higher and realize, with dread, that I have pushed the friction limits of my hiking shoes. As soon as I lift my foot again, I begin sliding downward, futilely clawing the rock. It’s more than eighty feet to the bottom, but I get lucky: I land standing up on the six-inch ledge.

Eli stares at me, agape.

“That was terrifying,” he says.

I had scraped off the outer skin on most of my fingertips.

When I get back to Eli, I apply anti-bacterial ointment, and he helps bandage the worst ones. But my raw fingers, painfully sensitive to the slightest touch, prove nearly worthless for the remainder of the climb.

I impress upon Eli that what I had done was reckless and foolish. Somehow, I think he understood this without my telling him.

Eli and I will climb the rest of the slide without incident. At my insistence, though, we put on rock-climbing shoes for better grip. We ascend in small increments, discussing beforehand the best way forward. Sometimes I take the lead to show him the moves. As often as not, however, I let him go first while I act as a spotter. Eli’s climbing lessons have paid off: he’s adept at analyzing the rock for handholds and toeholds. And (unlike some people) he knows when to back off.

Toward the top, we rendezvous with Carl. The scenery is amazing from this height. We enjoy views in three directions, with puffy clouds and wild mountains extending to the horizon. In the valley below is the stately Ausable Club in St. Huberts. Carl clicks off photos as Eli and I climb toward him.

He also takes a video of me walking up a crack in the rock.

Eventually, we scramble up the boulder at the end of the slide and follow a short herd path to the official hiking trail.

We turn left and in a few minutes reach the summit of Giant, where a half-dozen hikers are lolling on the open ledges. We find a quiet spot where Carl shoots another video, this one of

“My goal probably right now would have to be just doing more slides,” he says. “I think I’ve done about six or seven slides, and I would like to do a lot more.”

By the time we call it a wrap, it’s late afternoon. Carl plans to stay to take photos of the sunset, but Eli needs to make a family dinner appointment. We bolt down the trail, covering three and a half miles in under ninety minutes. He seems to be in a hurry to get out of the woods, but I have a feeling he’ll be in a bigger hurry to get back.

Rural Communities Need to be Recognized