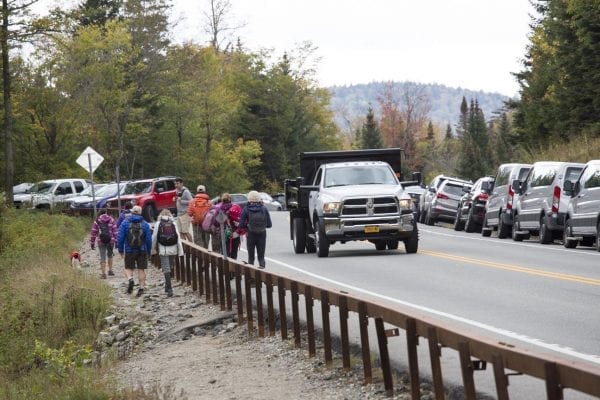 Willie Janeway has been spending his weekends counting cars. On the Saturday before Labor Day, he tallied 674 cars parked along Adirondak Loj Road, strung out for miles north of the Loj’s overflowing parking lot.

Janeway, the executive director of the Adirondack Council, estimates that there were more than five thousand hikers, with two thousand cars, using the popular trailheads in the High Peaks region—that is, those in Keene, North Elba, Coreys, and Newcomb.

The high numbers suggest that tourism campaigns are working, but the influx of hikers has raised questions about damage to trails and natural resources and about public safety along roads lined with cars.

“The challenge now is, how do we manage this?” Janeway said.

The state Department of Environmental Conversation is asking itself that question and hopes to have some answers soon.

Over Columbus Day weekend, typically a busy hiking time, DEC closed the Route 73 trailhead for Cascade Mountain, one of the most popular of the High Peaks, and directed visitors to begin their hike at the state’s cross-country-ski center at the base of Mount Van Hoevenberg. The makeshift trail lengthened the round trip to 8.3 miles from 4.8 miles.

Despite rainy weather, hundreds of hikers showed up at the temporary trailhead. Stewards from the Adirondack Forty-Sixers handed out maps and let people know of a shorter option: a 3.2-mile round trip to Van Hoevenberg, which is a lower peak.

The four-day trailhead closure was an experiment, but DEC will discuss whether to make it permanent. Hikers walked along wide ski trails to intersect the existing Cascade trail. If the temporary trailhead becomes permanent, though, DEC may create a separate foot trail through the ski center’s land.

In an opinion piece in the September/October issue of the Adirondack Explorer, Keene Supervisor Joe Pete Wilson suggested another idea: hikers could park at the ski center and take a shuttle bus to the Cascade trailhead. The town already operates a bus that shuttles hikers between Marcy Field and the Garden trailhead.

Neither of these ideas would address the parking congestion on Route 73 near the Giant Mountain trailheads. However, Bob Stegemann, DEC’s regional director, said the department aims to come up with a comprehensive plan to deal with the entire Route 73 corridor.

“We’ve got to the point where we have to manage not only to protect the natural resource, but also for public safety,” said Stegemann, who visited the temporary trailhead on the holiday weekend.

Wilson fears that the congestion (hikers and cars) along the highway will lead to a serious accident. “Every weekend I expect our ambulance to respond to a traffic fatality out at Chapel Pond or at Giant, you know, coming around the corner of that parking lot,” he said. “So the potential is there, and we’ve been lucky.”

Wilson spoke to the Adirondack Park Agency board at its October meeting, saying the state and local officials must work together to maintain public safety and ensure that visitors have a positive experience.

“This is a problem I’m so happy to have,” he said. “It has some troubles and inconveniences we have to deal with, but we are lucky to have this problem. If we send hikers away unhappy they will go to Vermont or Montreal.”

Wilson hoped to meet with state, county, and local officials in November to discuss solutions. ν