Home » Stories » Author Bill McKibben: ‘We can no longer solve this crisis one Prius at a time’

When Bill McKibben and seven Middlebury College undergraduates started 350.org in an attempt to help put an end to the age of fossil fuels, he might never have dreamed that they would coordinate 5,200 events in 181 countries in a single day, in what CNN called “the most widespread day of political activity in the planet’s history.” That day was October 24, 2009. Almost a decade later, McKibben is still at the front lines of climate activism, and the need for action to put a stop to the widespread burning of fossil fuels is as urgent as ever.

McKibben spoke at an event Wednesday, Climate Action: What We Can Do to Protect the Future, sponsored by the Adirondack Explorer in conjunction with the Wild Center. McKibben drew a sizeable crowd, selling out the Flammer Theater, and lectured for an hour, and then answered questions with Explorer publisher Tracy Ormsbee for half an hour.

Bill McKibben has been acclaimed by the Boston Globe as “probably America’s most important environmentalist.” He is a co-founder of 350.org, an international grassroots organization of people working to end the age of fossil fuels and transition to renewable energy, the Schumann Distinguished Scholar in Environmental Studies at Middlebury College, and journalist and author of 17 books, his latest, Falter: Has the Human Game Begun to Play Itself Out.” His Twitter account has more than 310,000 followers.

To audience members looking to find out how they as a single individual could best take action to prevent climate change, McKibben advised an approach that involved thinking beyond one’s own ecological footprint. “The most important thing that an individual can do is be less of an individual, and join large organizations,” he said. “We need you helping to build movements. We can no longer solve this crisis one Prius at a time, one vegan dinner at a time. We need to get people in numbers large enough to make a difference.”

McKibben not only stressed the bigness of climate action required in today’s world, but also the need for speed in making necessary changes. “We have to move at such an extraordinary pace now if we have any hope of catching up with the physics of climate change.”

According to McKibben, the technology mankind needs to make the transition to more renewable and sustainable energy sources already exists, and at reasonable prices. “The price of generating power from sun and wind has plummeted,” he said. “If we wanted to do something about climate change, we could. We could move with real speed.”

What is missing is sufficient motivation.

In the words of Stephanie Ratcliffe, the Wild Center’s Executive Director who spoke before McKibben, the reason for a lack of motivation among the general populace to combat climate change in recent decades has been the “systematic repression of climate change information.” This systematic repression launched by large companies like Shell and Exxon, McKibben says, has taken the form of a “massive and ambitious program to lie” and has been “successful beyond their wildest dreams.”

But in light of recent climate-created catastrophes like wildfires in Paradise, Calif., and the Amazon Rainforest, many people are learning the hard way about the need to take action. “Mother nature has now hit us upside the head enough times that most people now understand what is going on,” McKibben said.

But the current installment of politicians in the U.S. government poses unique challenges to attempts to resist carbon pollution. Our current president has expressed belief that climate change is a hoax perpetrated by the Chinese, McKibben said. McKibben drew attention to the importance of the next presidential election, warning that “If Trump is reelected, the era of effective environmental regulation of any kind in this country is over.”

Those who seek to forestall climate change, McKibben stressed, should also understand the importance of the financial sector in perpetrating harmful environmental practices. As an example, McKibben said Chase Bank has lent $186 billion to the fossil fuel industry over the last three years. He recommended people make themselves aware of what organizations their bank supports and then look for services elsewhere if their bank funds organizations that perpetuate the fossil fuel industry.

Standing up to political and private sector machinations backed by hefty amounts of influence and power certainly takes courage. But the current state of affairs on planet earth call for bold action to be taken to minimize damage that has already been done. “The planet is way outside its comfort zone, so you need to get outside of your comfort zone,” McKibben said.

McKibben, who has been jailed on multiple occasions in the name of climate activism, has certainly lived up to his words. The potentially grave consequences of the hole we have dug ourselves into by warming our planet allow him to keep in perspective the comparably small plight of spending a night in jail, he said. “Going to jail is not the end of the world,” he says. “The end of the world is the end of the world.”

“We are in an absolute gut-check moment in civilization,” McKibben said. “The next five to ten years will tell the story.” 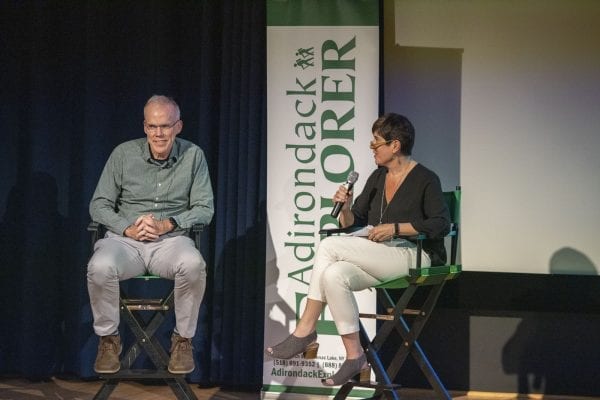 View all posts by Ben Westcott