The Open Space Institute has purchased a 618-acre parcel along Lake Champlain, including 4,000 feet of shoreline, and plans to sell it to the state to be added to the forever-wild Forest Preserve.

The property lies across from Schuyler Island, an undeveloped island already in the Forest Preserve.

OSI bought the land, which includes Trembleau Mountain, from the Gellert family for $500,000. It offers views of the High Peaks, Lake Champlain, and the Green Mountains of Vermont. The Department of Environmental Conservation plans to create trails after the state acquires the property. The highest summit of Trembleau is owned by another landowner, but the ridge has a number of slightly lower bald peaks with great views. 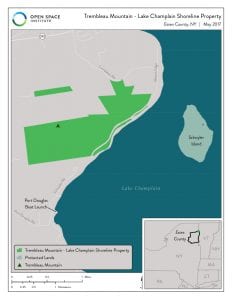 “The Gellert family has been outstanding stewards of this wonderful property,” OSI President Kim Elliman said in a news release. “We applaud their conservation values and their commitment to protecting this land for future generations to enjoy.”

The property is not open to the public at the moment, but Katharine Petronis, OSI’s northern program director, said she expects DEC to buy it “relatively quickly.” Depending on how long the transaction takes, she said, it’s possible that OSI will open the land to the public before the state buys it.

DEC had promised to buy the Gellert property last year in order to resolve a longstanding dispute over titles to land about 80 miles away. For decades, both the state and private landowners lay claim to 216 parcels near Raquette Lake. To settle the matter, the state agreed to give up its claims in exchange for obtaining title to the Marion River carry, a 296-parcel that includes a portage trail between Utowana Lake and the Marion River. The landowners raised money to pay OSI, which had bought the carry in 2012.

Although the state’s voters approved the land swap, the state Assembly questioned whether the state was getting a fair deal. To sweeten the pot, DEC said last year it would also acquire at least two other properties: Huckleberry Mountain in Warrensburg and the Gellert property. Since the department planned to buy these properties anyway, with its own money, some observers questioned what was gained.

In any case, DEC announced the acquisitions of the Marion River carry and Huckleberry Mountain last week.