Home » Outtakes » Parsing The Options For The Finch, Pruyn Lands 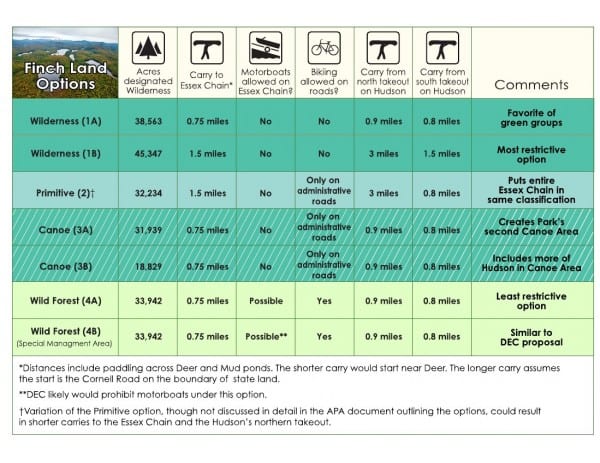 In an article in the July/August issue of the Adirondack Explorer, I examine the various options for classifying the former Finch, Pruyn lands acquired by the state from the Nature Conservancy. You can read the article here, but it also helps to peruse the table and maps included with the story. That’s what this post is for.

The above  table, designed by Jason Smith, shows at a glance how the seven options compare with respect to recreational uses and access. As you can see, the most restrictive options are Wilderness 1B and Primitive. Canoeists would face a portage of about one and a half miles to reach the Essex Chain Lakes. Paddlers on the newly opened stretch of the upper Hudson River would face a portage of about three miles if they exited the river at a new takeout near the confluence with the Goodnow River.

It seems unlikely that the Adirondack Park Agency will approve either of these options, given Governor Andrew Cuomo’s vow that the Finch lands would be accessible to the public. Moreover, the environmental groups are not lobbying for these options. I don’t know of anyone who is.

That leaves five options. Still a lot, but they can be divided into two camps: Wilderness (or its variations) and Wild Forest.

Three options–Wilderness 1A, Canoe 3A, and Canoe 3B–would prohibit motorboats and floatplanes on the Essex Chain Lakes. All would allow the public to drive fairly close to the lakes and the Hudson River. Paddlers would still face substantial portages but not as long as under the Wilderness 1B and Primitive proposals. As a practical matter, the public would see little difference between the Wilderness and Canoe designations. Both prohibit motorized use and motorized recreation. The major difference is that the state Department of Environmental Conservation would be permitted to drive or fly to the lakes to manage fisheries and natural resources. The Canoe designation also would allow the public to ride mountain bikes on roads used by DEC to reach the lakes. Otherwise, bikes are prohibited in both Wilderness and Canoe Areas.

The environmental groups support 1A or a slightly more protective version of 1A. They describe the 1A option as “Wilderness with access.” Given the similarity between Wilderness and Canoe, however, they probably wouldn’t object much to the Canoe options.

Two options–4A and 4B–would classify the Essex Chain Lakes as Wild Forest, which would open the door to motorboats and floatplanes. Under 4B, however, DEC would establish an Essex Chain Canoe Recreation Area with stricter rules imposed on the lakes. DEC hasn’t said what these rules will be, but presumably they would include a ban or restrictions on motorboats and planes. Theoretically, people could drive all the way to the Essex Chain under a Wild Forest classification, but DEC has proposed ending vehicular short of the lakes. Under this scenario, the portage to the Essex Chain under 4B would be the same as under Wilderness 1A. Likewise, the portages to and from the Hudson would be the same.

Both 1A, which is supported by the green groups, and 4B, which mirrors DEC’s own proposal, must be considered strong contenders. One major difference is that 4B gives DEC more flexibility in managing the region. For example, DEC has proposed allowing planes to land on Third Lake, the largest lake in the Essex Chain, in spring and fall and to open some roads to hunters in the fall. DEC’s proposal also  would allow disabled people with special permits to drive all the way to the lakes. Another major difference is that under 4B, mountain biking would be allowed in the vicinity of the Essex Chain.

Following are the maps that illustrate the 1A and 4B proposals. Keep in mind that the APA can modify any of the proposals. 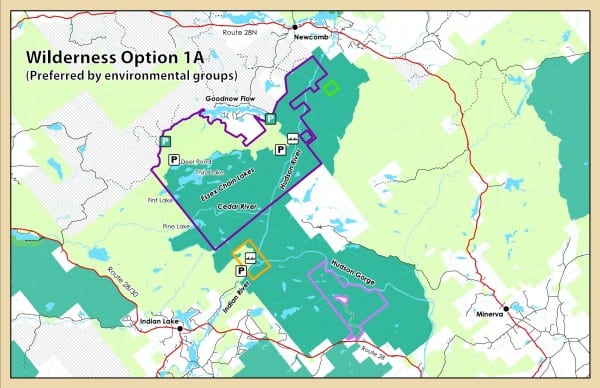 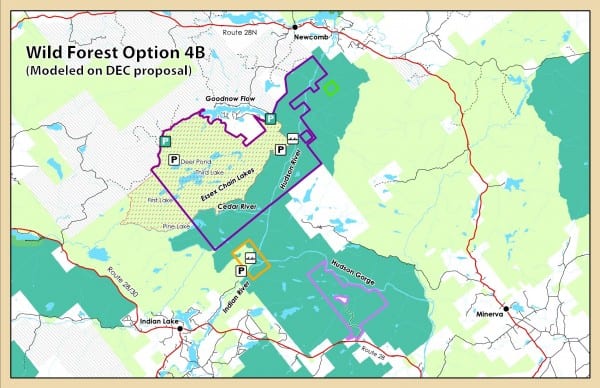