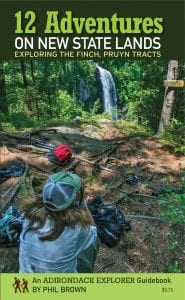 The Adirondack Explorer has published a multisport guidebook to the former Finch, Pruyn lands to let people know of the many recreational opportunities on tracts that had been off limits to the public for more than a century.

12 Adventures on New State Lands: Exploring the Finch, Pruyn Tracts has something for everyone: the hiker, the paddler, the mountain biker, the cross-country skier, even the rock climber.

The book is a celebration of the state’s acquisition of 65,000 acres of the former Finch lands from the Adirondack chapter of the Nature Conservancy. The last parcel, the 20,758-acre Boreas Ponds Tract, was purchased by the state in April.

Like the Explorer’s other guidebooks, 12 Adventures on New State Lands sells for just $9.75 and is designed to fit into your pocket. It differs from the other books in that all the maps and photos are in color.

I wrote the book after doing all 12 outings for articles that appeared in the Explorer. The maps were hand-drawn by Nancy Bernstein, who also does maps for our newsmagazine. Photos were provided by such pros as Carl Heilman II, Nancie Battaglia, Lisa Godfrey, R.L. Stolz, and Erika Bailey. The book was designed by Susan Bibeau, who also designs the Explorer. The publication was underwritten by the William Gundry Broughton Charitable Foundation and Furthermore: a program of the J.M. Kaplan Fund.

The main part of the book is divided into two sections: “Adventures on Water” and “Adventures on Land.” The first section covers five flatwater-paddling trips and one moderate-whitewater trip. The second section describes three hikes, two mountain-bike rides, and one ski tour. Of course, in most cases trails can be hiked, biked, or skied. We chose the method of travel that seemed most appropriate.

The flatwater trips are on Boreas Ponds, the Hudson and Opalescent rivers, Blackwell Stillwater, Essex Chain Lakes, and County Line Flow. The whitewater trip is on the Hudson between Newcomb and Indian Lake. The hiking destinations are the Boreas River headwater pond, Lake Andrew, and OK Slip Falls. The biking destinations are Pine Lake and former logging roads near the Essex Chain. The ski tour is on the Upper Hudson Ski Loop in Newcomb.

A bonus section gives an overview of rock-climbing opportunities on two cliffs: Sugarloaf Mountain near Indian Lake and Ragged Mountain on the Boreas Ponds Tract.

Click here to read a review by John Pitarresi, a longtime outdoors columnist for the Utica Observer-Dispatch.

The book can be purchased in regional stores on directly from the Explorer.