Last week, Iowa Pacific Holdings told Warren County officials it would back off its plan to store empty tanker cars on tracks in the Adirondacks if the county compensated it for lost revenue. The company estimates the revenue would be seven figures.

No money was forthcoming, and this week Iowa Pacific moved more than two dozen tanker cars through the Adirondacks to park them on a siding near the Boreas River in the town of Minerva. Click here to watch a video of the cars moving through North River.

The aerial photo above shows just how close to the Boreas the cars are. 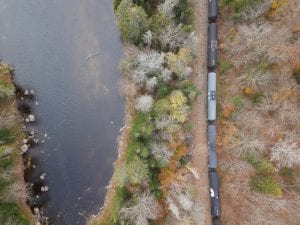 As it happens, Iowa Pacific is embroiled in a similar controversy in Chicago, where the railroad is based. The company is storing railcars in a neighborhood that the city wants to redevelop.

As it did here, Iowa Pacific offered to move the cars for a fee—in this case, $275,000, according to the Chicago Tribune.

“In my opinion, these guys are railroad trolls,” Matt Garrison, a developer, told the Tribune. “They want to get paid to move out of the way.”

One concern of Adirondack environmentalists is that the tankers could leak and contaminate the environment, including the Boreas River. The Boreas is designated a Scenic River in the state’s Wild, Scenic, and Recreational Rivers System.

Peter Bauer, executive director of Protect the Adirondacks, said in a news release today that there are “28 used oil tankers cars” on the tracks north of North Woods Club Road.  The tracks cut through the Vanderwhacker Mountain Wild Forest Area. “Each tanker car is roughly 58 feet in length and the 28 cars lined nearly one-third of a mile of rail track,” Bauer said.

The news release said Minerva Supervisor Stephen McNally opposes the storage plan. “There are many groups and individuals who work tirelessly to keep the Adirondack Park as the jewel that it is, but I cannot see how storing these cars goes along with this vision,” McNally is quoted as saying.

The state Department of Environmental Conservation and Adirondack Park Agency say they are looking into what can be done about the railcars. The company, however, contends that that the state does not have jurisdiction over the railroad.

Look for a full article on the controversy in the forthcoming November/December issue of the Adirondack Explorer.

Adirondack conservationists celebrated the U.S. Senate’s approval of landmark climate legislation, applauding a bill that would invest hundreds of billions of dollars into programs designed to speed the nation’s transition away from fossil fuels….Read more.