The color maps cover some of the same territory as the Adirondack Paddler’s Map, also published by St. Regis Canoe Outfitters, but the new maps are more detailed and, being smaller, easier to handle. 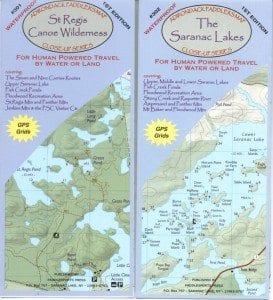 “Many first-time visitors are going to grab a $10 map before they grab a $20 map,” said Dave Cilley, owner of St. Regis Canoe Outfitters, which has stores in Saranac Lake and Floodwood.

The two maps were released a few weeks ago. They are not the first small maps published by Cilley. A few years ago he came out with the Adirondack Paddler’s Map South, which covers the Fulton Chain of Lakes, Big Moose Lake, Stillwater Reservoir, Raquette Lake, Forked Lake, Blue Mountain Lake, and Marion River.

They are part of what Cilley is calling his “Close-Up Series” of maps. He said he will be publishing similar maps for other paddling destinations, but he hasn’t decided what to map next.

One difference between the Adirondack Paddler’s Map and the new maps is that the new ones give the length (in meters) of carry trails.