Adirondack paddlers have had much to celebrate in recent years as the state’s acquisition of former Finch, Pruyn lands has opened up spectacular waterways to the public, including Boreas Ponds and the Essex Chain Lakes. But another land deal two decades ago did as much, perhaps more, for canoeists and kayakers.

At the end of 1998, Gov. George Pataki announced that the state had struck a deal with Champion International to conserve 139,000 acres in the Adirondack Park. Most of the land would be protected by conservation easements allowing sustainable forestry, but the state would buy outright portions of eight river corridors in the northern Adirondacks.

Twenty years ago this August, these waterways were open to the public for the first time in more than a century. To celebrate the anniversary, the Explorer is highlighting three flat-water paddling trips made possible by this landmark deal. All lie within the Santa Clara Tract, the largest of three swaths of former Champion lands. 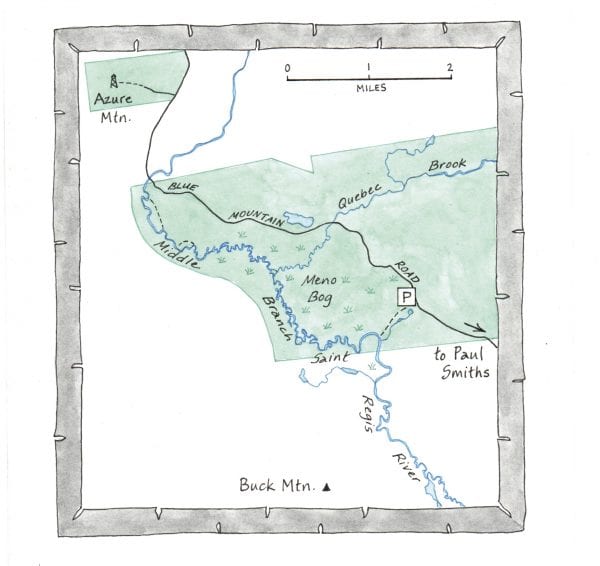 The Adirondack surveyor Verplanck Colvin recognized the charms of this serene stretch of the Middle Branch of the St. Regis during a visit in 1883. In a report to the state legislature, he extolled it as “a picturesque stillwater which winds for miles through rich alluvial lands, now among alders and bushy swamps, and now through natural meadows.”

And so it remains today. But getting to this beautiful waterway takes a little work. From Blue Mountain Road, paddlers must carry or wheel their boats 0.7 miles to a sandy put-in on the east shore. The trail is an old woods road, smooth and flat, so the carry is not all that bad, and yet it almost guarantees that you’ll find solitude on the river.

Head downstream after getting on the water (upstream soon leads to private land). At the start, the east shore is wooded, but in less than a mile, you enter Meno Bog. Meandering through this vast marsh and swampland, you never know what you’ll find around the next bend—perhaps a great-blue heron, a merganser or a muskrat.

The topography of this region of the Adirondacks is not dramatic, but there are some small peaks in the neighborhood. On the downriver trip, you can see Azure Mountain and its fire tower to the north. On the return trip, you’ll have Buck Mountain in your sights.

After nearly six miles, you reach a rapid. Since there are other rapids ahead, we suggest you turn around here. On the way back, look for the hidden mouth of Quebec Brook, which enters the Middle Branch a few miles upriver from the rapids. If the water is high, it’s worth poking around this narrow stream.

DIRECTIONS: From NY 30 near Paul Smith’s College, turn west onto Keese Mill Road. At 7.4 miles, after a sharp right bend, the road crosses the Middle Branch on a steel-deck bridge. Continue another five miles to a parking area on the left. The carry trail begins at a vehicle barrier. Most of the road after the bridge is dirt. 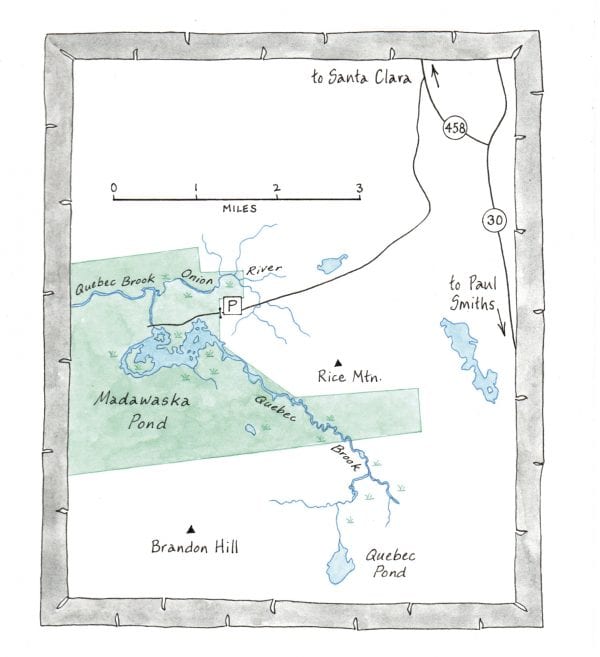 The 19th-century travel writer Edwin R. Wallace referred to Madawaska as “Muddywaska,” and paddlers who stir up the muck while crossing this shallow pond can understand why. But don’t let this deter you: Madawaska is a beautiful waterway, teeming with birdlife (including rare boreal species) and adorned with water lilies, floating bogs and piney islands.

In any event, Madawaska is not the whole trip. You also can explore Quebec Brook, both entering and leaving the pond, as well as its tributary, the Onion River. Altogether you can get in more than 15 miles of paddling (round-trip).

From the put-in on the north shore, head southeast to Quebec Brook (the inlet). Broad at the start, the brook narrows as you progress upstream. Look for Rice Mountain to the east; farther on, Jenkins and St. Regis Mountains come into view in the south. You should be able to travel upstream three miles or so.

After returning to Madawaska, head west to check out the floating bogs and then turn north to go to the outlet (also known as Quebec Brook). Carry around the dam and re-enter the brook. Paddle down the marshy stream for 0.4 miles and then turn right to travel up the Onion River—said to be the only Adirondack river that flows into a brook. You can get about a mile up the Onion, but you may have to pull over a few beaver dams.

Upon returning to Quebec Brook, you can resume heading downstream for another mile and a half before encountering rapids. (Below the rapids, the brook eventually flows into the Middle Branch of the St. Regis.) This is the place to turn around. A short distance from the confluence you’ll have to squeeze under or carry over the burnt ruins of a railroad bridge.

DIRECTIONS: From the intersection of NY 30 and NY 86 in Paul Smiths, drive north on NY 30 for 9 miles to NY 458. Turn left and go 1.3 miles to Madawaska Road, marked by a state sign. Turn left and go 5.7 miles on dirt roads to the parking area, bearing left at 0.3 miles, right at 3.3 miles, and left at 5.4 miles. The carry begins at a vehicle barrier. Walk down an old woods road for about 0.4 miles until you see the water nearby on the left. 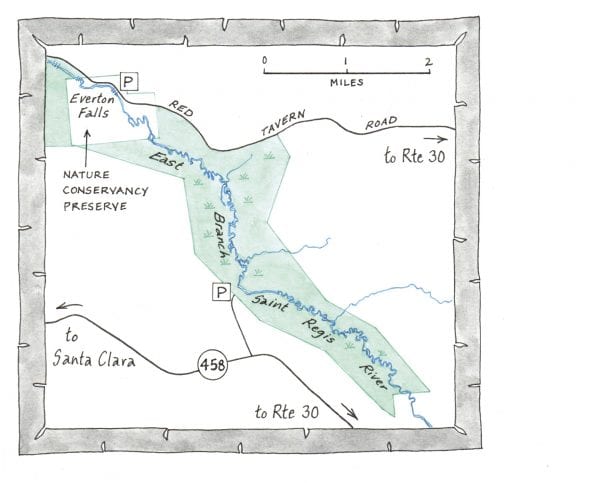 The Nine-Mile Level on the East Branch is another long, wild stretch of flat water—one of the most delightful in the park. Once you put in on the little-traveled Red Tavern Road, you leave civilization entirely behind.

The trip begins near Everton Falls on property owned by the Adirondack Nature Conservancy. Paddling upriver, you enter the public forest preserve after a mile and a half. It’s possible to continue more than eight miles farther before reaching rapids and private property.

Though traveling against the current, you won’t find the paddling difficult except in one area. At 1.3 miles from the put-in, an island divides the current. Bear right here. As you go around the island, you will have to paddle hard in two spots.

Above the island, the river settles again into its lazy self, meandering through alders and grassy meadows and past marshy cul-de-sacs. In summer, you’ll see joe-pye weed and other wildflowers on the banks. The birds to be seen or heard include great-blue herons, common mergansers red-winged blackbirds, cedar waxwings and belted kingfishers.

At 4.9 miles from the put-in, you may notice a red ribbon tied to a branch. This is an alternative put-in off Route 458. Just beyond is a long straightway, but the river thereafter resumes its meandering course. Nearly 10 miles from Everton Falls, you come to a bouldery section. A private footbridge can be seen ahead. Turn back here and enjoy the downriver cruise.

DIRECTIONS: From the intersection of NY 30 and NY 86 in Paul Smiths, drive north on NY 30 for 17.5 miles and turn left onto Red Tavern Road. Go 8.1 miles to a parking area on the right. The put-in is on the other side of the road.