Home » Stories » Skiing into the mild 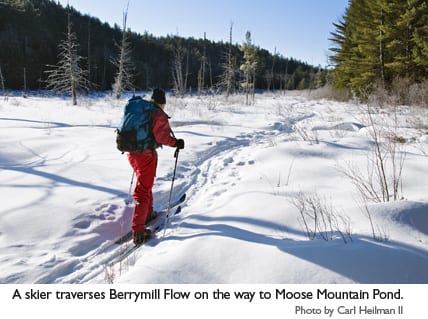 I had made a date earlier in the week to go cross-country skiing with my daughter, so when I awoke to find several inches of fresh sugary powder in Saranac Lake, I looked forward to a great day.

The plan was to ski to Moose Mountain Pond in the Hammond Pond Wild Forest, a forty-thousand-acre tract of state land west of Port Henry. It’s a great trip for novice skiers with some backcountry experience. The 3.5-mile trail has just enough ups and downs to keep things interesting.

Before hitting the trail, I picked up Martha in Plattsburgh, where she attends college. At the time, she was a freshman. On the drive south, she told me she had been learning about the Pre-Socratics, Plato, and other Greek sages.

The Pre-Socratics? Was this the same girl whose favorite philosopher used to be Bart Simpson?

We arrived at the parking lot just before 12:30 p.m. Two trails begin here. If you’re going to Moose Mountain Pond, take the one to the right, marked by blue disks. The other, marked by red disks, leads in a mile to Hammond Pond (another easy ski trip). 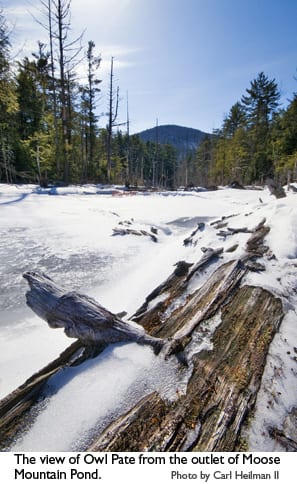 Right away, I noticed that the trail was crawling with snow fleas, which emerge on warm winter days. They served as a reminder that we were not that far from Champlain Valley, the Adirondack Park’s Banana Belt. The climate here is milder than Saranac Lake’s.

Martha thought the fleas were gross. “Do they get on you?” she asked. I assured her that she had nothing to worry about.

As we set off, Martha took the lead. To my disappointment, I could feel my skis sticking. The warmth had changed the consistency of the snow from sugar to something closer to molasses. But as long as we kept moving, we were OK.

In every other respect, the trail was wonderful. At the outset, it followed an old tote road, with Berrymill Brook nearby on the left. Fresh snow weighed down the branches of the large hemlocks. Where the branches overhung the trail,

Martha would stop and knock off the snow before brushing past them.

No one was ahead of us, but snowshoers clearly had used the trail this winter. At 0.4 miles, the official route turns right and goes uphill to avoid a large beaver meadow. Originally, the trail went straight along the edge of the meadow, but frequent flooding forced the state to reroute it. In winter, though, you can ski across the meadow to avoid the hill.

The meadow offered a change from the dusky woods. Instead of majestic hemlocks, we were looking at gray snags and bare shrubs, whose dark lines and swirls stood out against the white field of snow. An osprey nest balanced atop one of the snags. On another snag was a nesting box for wood ducks. 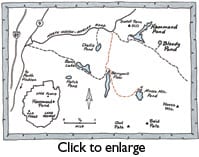 If you ski through the meadow, stay close to the wooded edge and look for openings that provide access to the old trail. You can follow the old trail back to the new. After leaving the meadow, Martha and I climbed slightly to rejoin the new trail on a hill, with maybe thirty feet of descent. As I glided down, my right ski plowed into heavy snow during a wedge turn, and I couldn’t get it out. I had to fall to avoid hitting a tree.

A wipeout on this dinky descent? Was this the same Dad who boasts about skiing Mount Marcy? O, the ignominy.

Martha was not taking any chances. She sat down on her skis for the first ten feet and then snowplowed the rest.

Don’t fret: There is nothing really difficult about this hill, at least in ordinary snow conditions. Anyway, as we discovered, we could have avoided the descent altogether. At the bottom of the hill was a trail leading on the flat to the beaver meadow. Apparently, we had followed snowshoe tracks that left the old trail prematurely.

Pushing on, we came close to Berrymill Brook again and passed the site of a small waterfall—now a frozen mound of snow. I asked Martha what she thought of the trail so far. “It’s nice how it’s secluded,” she replied.

The trail pulled away from the brook to begin a long, gentle ascent. At the top, the woods changed abruptly from hemlocks to hardwoods. This was followed by a short, easy descent to a trail junction marked by a wooden sign. The way right would have taken us to Bass Lake. We continued straight and arrived at Berrymill Flow a minute later.

Reached at 1.7 miles, the flow is one of the scenic highlights of the trip. We crossed the outlet, Berrymill Brook, on a sturdy wooden bridge. On the other side, we were back in a hemlock forest. For about a quarter-mile, the trail paralleled the east shore of the flow before swinging left and beginning one of several gradual ascents en route to Moose Mountain Pond.

There was only one hill steep enough to demand intermediate skills. I was worried that it might give us trouble on the way back, so I sidestepped up it and broke up the heavy snow. By the time I finished, I had created a groomed slope worthy of an alpine resort.

A few minutes later, we spotted the first of several wetlands fed by the outlet of Moose Mountain Pond. Having skied here before, I knew now that we were close. The trail soon brought us to the pond’s southwest shore. We skied across the frozen surface, taking in the views of Moose Mountain and Owl Pate, to reach a lean-to that sits above the north shore. 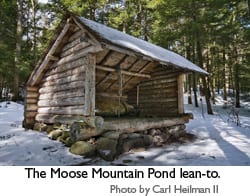 What a well-appointed lean-to it is. Inside were an ax, a saw, shovel, rope, hooks for hanging stuff, and—believe it or not—a small canoe. Evidently, a lot of fishermen try their luck here. Among the usual lean-to graffiti (along the lines of “John loves Mary”) were the following: “LM Bass 14 in. 15 pounds” and “10 trout.”

Martha and I stayed just long enough to eat our sandwiches and drink a thermos of tea. It had taken us two hours to get there, more time than I expected. But we were breaking trail in sticky snow and stopping for photographs. I thought we might be able to make the return trip in an hour.

Indeed, we made much better time following our tracks, especially since there was much more downhill in this direction. In a jiffy, we were back at the “groomed” slope. I went first and made it down without another bout of ignominy, but Martha decided to sidestep down. I guess reading Plato has made her smarter.

Despite our faster pace, we had to stop three or four times to scrape snow off our skis. If not for this, we might have made it back in under an hour. We missed the mark by only ten minutes.

It was not the perfect day I had envisioned, but I enjoyed it. I asked Martha for her opinion.

“If it was better weather …,” she began. Then she stopped and delivered the final verdict: “It was fun.”

Even without sugar, Moose Mountain Pond is sweet.