Anglers search for salmon in the heart of Plattsburgh

According to popular legend, local anglers send tourists to the Ausable River whenever they inquire about the North Country’s best fishing.

When fishing themselves, though, they head for the Saranac.

Throughout November, we’re publishing a series of stories about the effect dams have had on two of the parks’ important rivers, the Boquet and the Saranac.
As beautiful as these rivers are and as wild as they seem, dams have changed them, blocking the natural movement of fish for decades and, in fact, centuries.

Who would think that for some of the best salmon fishing on the west side of Lake Champlain, anglers head straight into the heart of the City of Plattsburgh?

Three rivers flow from the Adirondacks into Lake Champlain. From north to south: Saranac, Ausable and Boquet. Of the three, the Saranac and Boquet are the most acclaimed for landlocked salmon, similar to seagoing Atlantic salmon, though smaller.

The Saranac, while a popular salmon-fishing destination near its mouth, isn’t what it once was. Salmon can reach only as far as Imperial Mills Dam, a fish blocker 3 miles upstream.

The beautiful fish, whose color resembles a spotted ingot of silver, run in the spring and the fall, driven by food and sex. In April, and then again in September, anglers sit on high alert, like a cat waiting to pounce on a mouse, their whiskers quivering for any word that a salmon has been spotted swimming up from the lake.

When a salmon makes an appearance, word spreads through the region’s bait shops, bars, post offices, gas stations and Stewart’s convenience shops, and within days, if not hours, anglers will be haunting the mouths and lower reaches of the rivers in hopes of landing what is arguably the North Country’s most stately fish. And there the fishing community will plant itself for about six weeks, during the course of the run. 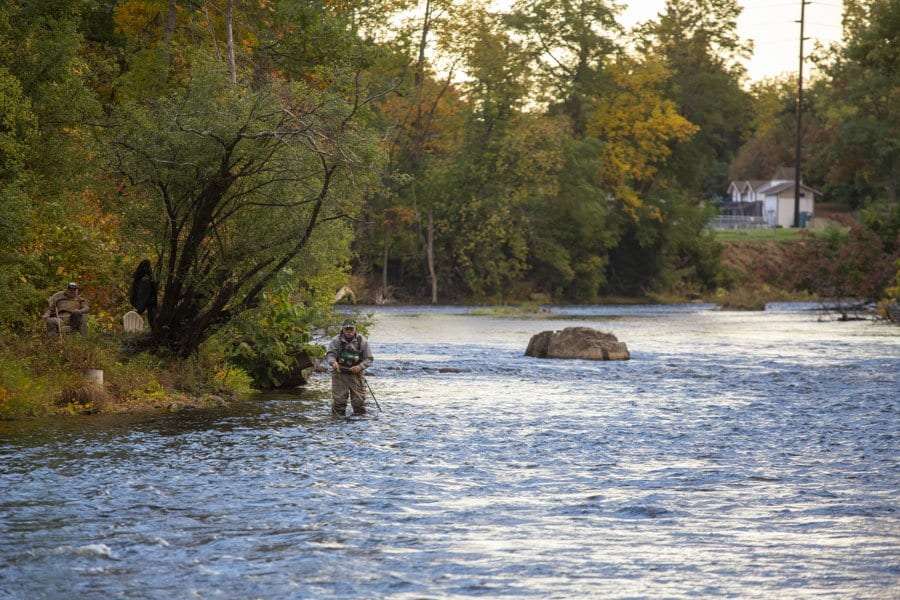 Anglers seeking salmon get up before dawn and stay out until sunrise, hoping to catch fish when they are most active at the bookends of the day. Multimedia Reporter Mike Lynch joined them on several occasions, documenting their efforts. You can see a photo gallery from those assignments by following the link below.

Scott O’Brien, who lives on the Saranac in Plattsburgh and has been fishing it for 30 years, said a number of factors go into the salmon runs, most notably water temperature and flow. The first fish generally start showing up for the fall run in September, but this year the weeks rolled by with nary a fin. The water temperature was cold enough, but a dry summer had left the water too low for the fish’s comfort.

When the riffles are too shallow there is not enough protection against predators, and the fish are content to hang out in the lake until conditions improve.

On the last day of the month, an overnight storm dumped 2 inches of rain in the Saranac watershed, and the river’s flow nearly doubled, O’Brien said. The salmon season was about to commence.

It took American industrialists almost no time at all to destroy the landlocked salmon fishery in Lake Champlain. Rivers in many ways built the country, providing power and waste disposal that ran the mills that chewed logs into pulp, spun broad sheets of paper and pounded the iron from rock. But those dams also destroyed the salmon’s annual fall spawning run and, according to the Department of Environmental Conservation, by the middle of the 19th century, the fish were gone.

For the next century, attempts were made to bring the salmon back, with no success. But by 1976, biologists were having success on the Boquet, where adult salmon runs once again began to take hold.

Today it’s the salmon, not logs and ore, that hold promise of an economic revival. New York communities along the shores of Lake Ontario are reaping staggering rewards from salmon, including transplanted Pacific salmon. According to the Oswego County Department of Community Development, local and visiting anglers generated $193 million in total economic impact in Oswego County in 2017, supporting 934 jobs. The Salmon River Fish Hatchery is a tourist attraction in itself (in non-COVID years), and anglers pack hotels and restaurants, and patronize charter services and bait shops. In 2018, Oswego County sold 32,821 fishing licenses to out-of-state and international visitors—and that doesn’t count licenses bought online.

The fishery contributed $19 million in state and local tax revenues in 2018, and saved the average household more than $400 in taxes.

“It’s a very significant impact on our local economy,” said Janet Clerkin, tourism and public information director for the county. “Anglers come from all over the United States and from other countries.”

When the fish run, the rivers are lined with anglers, and the bridges are lined with people hoping to see a big catch. “People come and watch—it’s almost like a spectator sport,” Clerkin said.

On Lake Champlain, the economic benefits of bass fishing show the potential of developing an active salmon fishery. “Fishing in general has a huge economic impact,” said Matt Courtright, president and CEO of the Ticonderoga Area Chamber of Commerce. Bass tournaments that used to number less than a dozen now number 30 to 35 and generate several millions of dollars to the local economy, Courtright said.

And in the summer of the coronavirus, fishing basically saved the local hotel business. “We’ve heard from all our lodging properties that numbers were down, but they were able to get through because of the tournaments; it was the bulk of their business,” Courtright said.
Fishing, he said, also can be an answer to a constant economic conundrum: how to attract tourists during the shoulder seasons of April and November. These are normally dead times between winter and summer recreation when many hospitality businesses scale back or shut down altogether.

But they also are the months salmon can be taken from the rivers flowing into Lake Champlain. And rather than be a deterrent, for a salmon fisherman, soldiering on in the face of miserable conditions is something of a badge of honor.

To get to the Saranac’s most popular fishing hole, you drive toward the heart of Plattsburgh, and then after a series of left-rights through a residential neighborhood, you arrive at a dead end with the river just beyond. Scoot down the bank and part the reeds and you will find a collection of sawn logs, perfect for sitting around and chewing the fat—which, among anglers, is almost as popular as fishing itself.

This outdoor space is known locally as the Conference Room, where anglers will sit and wait their turn to fish the Allen Street Pool, flicking flies in the water and slowly working their way downstream hoping for a strike. Decorum holds that you cast and then take a few steps to make room for the next angler to join in. At the end of the pool, the angler will walk back to the Conference Room to sip coffee or puff some tobacco until their turn in the circuit comes around again.

A salmon’s venture upstream is logical and predictable, although that doesn’t mean they are easy to catch, said Rich Redman, president of the Lake Champlain Chapter of Trout Unlimited. They do not stampede up the river all at once, but take their time, using their energy to fight upstream through the riffles and then resting in deep pools until they have recovered to the point of attacking another section of fast water.

The pools, to the practiced eye, materialize as black slicks that generally are found following a riffle. “If you want to find the flash, look where it’s dark,” Redman said.
Classically, salmon are taken with flies in a pursuit that is as much art as sport. But the salmon themselves are not as discriminating, and will hit on spoons, stick bait or plain old worms, Redman said.

Fishing for salmon can be as simple or as complicated as a person wishes to make it. Some tie their own flies to resemble insects that correspond with natural hatches—and not only that, they mimic the life cycle of a particular fly, from when it’s a nymph to when it is floating on the river drying its wings in preparation for flight.

The best gear can be expensive, and entire winters are dedicated to the intricate tying of flies. But money and fussiness are not requirements of fly fishing. An acceptable outfit can be had for $200, and there are innumerable pre-tied flies on the market, their names often as colorful as their threads. (One fly is named None of Your Business, so if you catch a fish and someone asks what fly you are using—well, you get the idea.) Groups such as Trout Unlimited and fly shops also hold classes to teach the finer points of casting and rigging the line.

Talking about the Saranac fishery, Redman had to stop mid-thought as his words were drowned out by the raucous whistle of a northbound freight grinding slowly up the east end of town. It was timely interference as Redman had just been explaining how salmon fishing is just now recovering from more than a century of industrial mayhem, and how the sport is a new economic engine for communities that attract anglers the world around.

Rivers, he believes, are entering a new era, trending away from their utilitarian past, when they were used for sewage disposal and mechanical power. They can be just as valuable going forward as destinations for recreation, he said, which is why it pays to take down the dams of old.

On this day, the run had yet to start, but that was OK. After an early morning of working the river, a couple fishermen were dozing and checking their phones, waiting for the afternoon when maybe they could catch a few fallfish just for some action. Meanwhile, for being in the heart of town, the scenery wasn’t bad.

With Lake Champlain as a backdrop and the leaves of the ash and maple that screen the river from city streets starting to turn, fish were almost optional.

“It doesn’t matter,” Redman said. “This is all about getting out and enjoying life.”

Tim Rowland is a freelance writer based in Essex County, NY.

View all posts by Tim Rowland