It’s mid-morning and the trail up Bald Mountain just outside Old Forge is already hopping, with hikers embarking on the ascent and others already returning from the top.

A dad with a son and daughter who look to be on either side of ten years old, run down slanted rock edges, giggling. Mom follows at a more sensible pace. They pass another set of parents and their teenage kids who have paused at rock ledges to catch their breath and snap pictures.

Different peaks have their own personalities and excursions have distinctive characters. A climb up Mount Marcy is a quest to the state’s highest point.  A trudge up Allen is a test of commitment, endured mostly to bag it as one of the forty-six.

But the Adirondacks are not just populated by lofty eminences demanding skill and grit. We also have neighborhood favorites, homey hills whose paths are worn down by the boots of families who visit time and again over the years and generations. Saranac Lake has Baker Mountain, Lake Placid has Cobble Hill, and Keene has Owls Head.

It’s hard to imagine any mountaintop, though, where the scene is as warm and welcoming as Bald Mountain on this balmy, clear, early-fall Sunday. Like visiting a family friend, parents and grandparents have gathered up the kids and their buddies and headed up the 0.9-mile-long trail for a few hours of exercise and laughs, a taste of adventure, and, of course, talk of when they first started hiking Bald Mountain decades ago.

The family taking photos includes a father who had hiked Bald Mountain as a little boy, and a son who had first embarked on the ascent as a three-year-old but only made it about as far as where they now rest.

A Saratoga couple who soon appear on their way back from a quick trip to the summit make similar jaunts several times a year, and the woman started her love of hiking as a young girl on Bald Mountain.

The hike is moderate enough to be accessible for all ages yet has just enough ledge-scrambling to give a hiker a sense of accomplishment. The deciduous forest at the base transitions to a spruce-fir forest as the trail climbs. Nearing the summit, views open to the south and reward climbers with prospects of the Fulton Chain of Lakes, especially Fourth lake just below. The waters are cradled by slopes that on this day tease us with just the beginning of autumn colors in the rich green background­—and no hint of the cold days to follow. 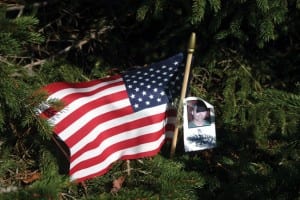 The summit is open and expansive enough to feel like a kind of rocky village square. Groups stream in as we enter the lunch hour. With feet planted on firm ground visitors have a 180-degree view to the south. But the most immediate attraction for many is the restored fire tower. From its cab they can see over treetops to Blue Mountain in the northeast and beyond to the High Peaks.

The thirty-five-foot tower inspires a lot of discussion about fear of heights as hikers approach, assess the prospect of scaling five exposed flights of steps, and wait for others to climb down so they can have their turn in the observer’s cabin.

Some, especially children, scamper easily. Others, like one determined father, step quickly knowing that to hesitate is to lose any chance of completing the challenge. One older woman stalls halfway to the top, but when her husband tells her there is a map in the cab for identifying peaks, she pushes on. For many, descents are even more tentative than the climb. Backing down as if on a ladder is a popular technique for fighting vertigo. The thrill is captured best by a nine-year-old boy who strides confidently down the steps calling out, “I conquered my fear!”

Near the base of the tower, easily overlooked amid the hubbub, is a somber symbol of the role the peak plays in the lives of families. Sheltered by rock ledge and poking through the dense needles of scrub brush are a small American flag and a rough cross fashioned from twigs. A photo card on the flag reads:

When I am able to reach his mother the next day I learn that the twenty-three-year-old Marine from Phoenix, N.Y., was killed by an improvised explosive device in Afghanistan on what would have been his last patrol.

“The first time he climbed Bald Mountain he was two years old,” Lorie Schneider said of her son. “The last time was on the Fourth of July 2010, and it was the last mountain he climbed in New York before he was deployed. We commented on how he was two when he first climbed the mountain and now he was twenty-two. He brought his fiancé with him. Bald Mountain was his favorite. It was so quick and so beautiful. He always remembered the time we set the alarm clock to climb Bald and see the sunrise. He always talked about it.”

Lorie said she and her husband, Richard, will now climb Bald Mountain every Fourth of July. They have begun a rite of remembrance: carrying a stone from the summit each time they visit Bald Mountain to bring to Kyle’s grave in Arlington Cemetery. They bring another from Arlington to the summit of Bald Mountain.

On this pleasant Sunday morning families still stream up the trail, chatting with strangers and soaking up the scene. Children, some almost as young as two, are everywhere. A four-year old boy says he is setting out to climb all the Adirondack fire-tower peaks. Two little girls crane over the low wall of the tower’s cab to point out sights. And a little boy is happily telling folks, “I conquered my fear.”