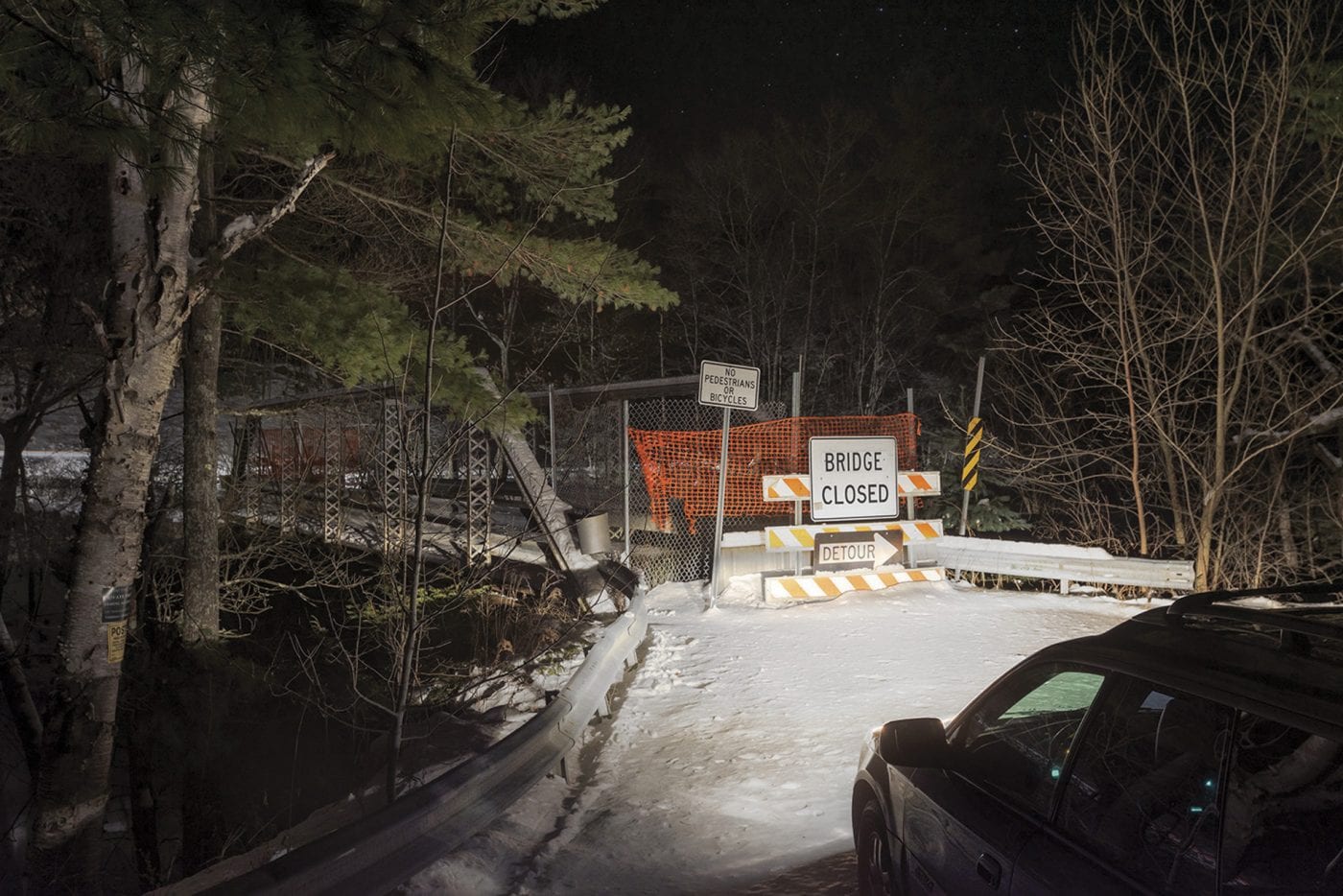 The town of Horicon has been unable to replace this bridge over the Schroon River. Photo by Carl Heilman II

New Yorkers narrowly passed in November a constitutional amendment to establish a “land bank” for the Adirondacks and Catskills that will enable counties and municipalities to undertake highway and utility projects that impinge on the forever-wild Forest Preserve.

More than 10 percent of the 3.5 million people who took part in the November elections did not cast a ballot either way. Of those that did, 52 percent favored the land bank.

The proposal passed by greater margins in the twelve counties that lie wholly or partly in the Adirondack Park. The only two counties entirely within the Park are Essex and Hamilton. In Essex, it received 62 percent of the votes cast; in Hamilton, 75 percent.

In contrast, a proposal to call a convention to rewrite the state’s constitution was roundly defeated, both statewide and in the North Country. Statewide, 83 percent of the cast votes opposed the convention.

Adirondack environmental groups opposed the constitutional convention. The fear was that the convention delegates would weaken Article 14, the clause that mandates that the Forest Preserve “be forever kept as wild forest lands.” However, they favored the land-bank proposal (which amends Article 14).

“I’m delighted that it passed. It was a little closer than we thought,” said Neil Woodworth, executive director of the Adirondack Mountain Club.

Woodworth blames the slim margin on misconceptions about the proposal. For example, he said some people thought it would open the door to fracking pipelines throughout the state.

You may be wondering how the land bank actually works and what happens next.

There are two parts to the amendment. One establishes a “health and safety land account.” This is the land bank, which can contain 250 acres. It will allow localities to undertake projects along roads that pass through the Forest Preserve. Permissible projects include addressing bridge hazards, straightening dangerous curves and grades, and relocating roads. The account also can be used for drinking-water wells within 530 feet of roads.

Sean Mahar, spokesman for the state Department of Environmental Conservation, said the department is evaluating parcels to satisfy the land-bank requirements. “It is our hope to present an option to the legislature for approval as quickly as possible so as not to delay the ability of local governments to utilize the health and safety account,” Mahar said in an email.

The land could be in either the Adirondacks or Catskills or both. Woodworth said he doesn’t have specific suggestions, but he’d favor acquisitions that improve recreational access, such as a canoe carry or new trailhead.

The second part of the amendment will allow the state, county, or municipality to install utility lines—that is, electric, telephone, broadband, water, or sewer lines—and to create bike paths within highway corridors. These projects would take place within the width of the corridor, not on undisturbed Forest Preserve lands, and they do not depend on the land bank. The amendment specifies that the authorized projects do not include intrastate gas or oil pipelines.

The land-bank amendment was supported by local leaders as well as environmentalists. In the past, localities had to obtain a constitutional amendment for small projects on the Preserve—a cumbersome process that can take years.

Fred Monroe, executive director of the Adirondack Park Local Government Review Board, said the town of Horicon has been unable to replace a bridge over the Schroon River because doing so would encroach slightly on the Forest Preserve. Efforts to get around constitutional objections proved futile. Thanks to the approval of the land bank, the project can move forward.

“At every turn, we hit a roadblock,” Monroe told the New York Times. “These are small projects that would use very little acreage, and we think the land bank will last a very long time.”