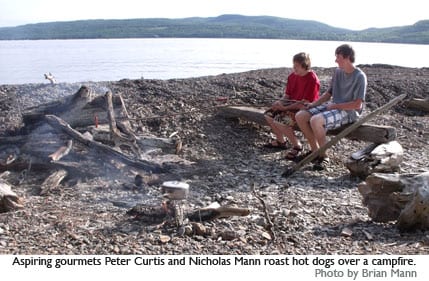 A few quick strokes with the paddle draw me out from the Port Kent beach, my kayak threading through the tar-black pilings of the ferry dock. It’s hot and still.

Lake Champlain is glassy calm, and the Green Mountains lie against the eastern horizon under a summer haze.

Behind me, I can hear the laughter and chatter of my son, Nicholas, who is fourteen, and his friend, Peter Curtis, who’s thirteen. The two boys are crewing a tandem kayak, still trying to work out their rhythm. It’s Peter’s first time in this kind of boat.  He’s a little uncomfortable and anxious about heading out on the big lake. But after a quarter-hour he settles in.

“It’s very nice, very fun—definitely worth it,” he declaims. “Nice mountains, a green valley straight across from us. Bright sunshine, blue sky!”

Our destination is a place I’ve never visited: Schuyler Island, a 123-acre chunk of Forest Preserve that lies about a half-mile from the New York shore. It was here, after the battle at Valcour Island, that Benedict Arnold retreated and re-organized his fleet in 1776. 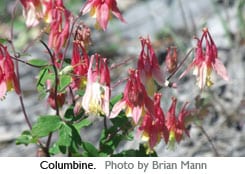 It’s a short, satisfying paddle, an hour tops even for our novice crew.  (In inclement weather, the approach would be fairly exposed and require roughly a half-mile of open-water paddling.)  After rounding Trembleau Point, the island lies before us like something in a tropical beach movie. The idea of an entire island all to themselves gives the boys a shot of adrenaline, and they paddle like fiends.

As we pull up on the gravel beach, the guys are beaming. “That wasn’t hard at all,” Nicholas says. “Yeah, it took a lot less time than I thought,” Peter adds.

They’re chafing to get away, to go exploring Robinson Crusoe-style, so I cut them loose and head off on a ramble of my own. Schuyler Island’s appearance from the water is a bit deceiving. The shore is fringed with forest—white pine, hemlock, and birch—but the interior is a vast open meadow, with patches of gorgeous marsh and wetland. Beware that the island also has poison ivy.

Schuyler Island sees far less use than the larger Valcour Island to the north. The ownership of Schuyler changed many times before the state acquired it in 1967. At times, it was farmed. Wandering about, I find remnants of human history. A mound of stones marks a field that someone spent back-breaking days clearing. A mock orange tree—likely planted by some past settler—is in full bloom, radiant with scent and buzzing with bees.

From the eastern shore, there is an expansive view toward Vermont of the city of Burlington with Camel’s Hump and the Green Mountains in the background. The wind has picked up, and the water has turned a shade of aubergine.

Tucking back into the woods, I find myself in a meadow of waist-high ferns, shot through with lime-colored sunshine.

When I hear a sudden flurry of feathers and cheeping, I realize that I’ve stumbled upon a clutch of grouse chicks. Brown and yellow faces peer up at me anxiously. The mother grouse limps away through the bushes, trying to fool me with her fake broken wing. I backtrack carefully to avoid stepping on anybody. 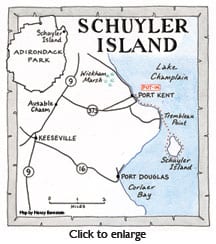 In the late afternoon, I regroup with the boys. Peter and Nicholas, who have boundless energy, set up the tent and build the fire, while I supervise from my hammock. Perhaps Schuyler Island’s coolest features from a teenager’s point of view are the big gravel and sand bars that jut out from shore. These offer excellent swimming, and they’re littered with driftwood.

The boys set about building a bonfire big enough to be seen from the space shuttle. They work together, using levers to roll logs the size of telephone poles. I ask Peter what he thinks of the adventure, and he grins. “I don’t spend time outdoors anymore,” he says. “Not very often. Most of the time I’m on the computer, on Facebook, or playing a game.”

“Is this better or worse than being on the computer?” I ask.

“I can’t tell whether it’s more fun,” he says, after moment’s contemplation.  “But something inside me instinctual says it is. And it’s exercise. It’s way more exercise than I usually get.” 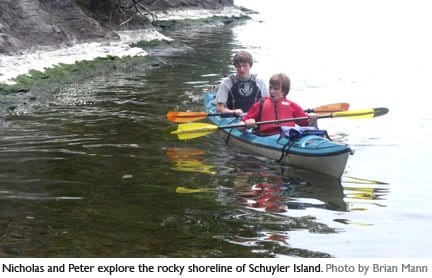 “If I had to choose between a lifetime subscription to World of Warcraft and here—I would choose here,” Nicholas adds, referring to a popular computer game.

Trust me, that’s pretty high praise. Once the bonfire is built to truly colossal dimensions, the boys throw themselves into the lake, howling and flapping their arms.  They scramble back to steam away the cold water. After I cook a dinner of hot dogs and beans, a quick squall blows up the lake, but it rains for only ten minutes or so.

At dusk, I retreat to my tent on the grassy bluff to read a novel. Schuyler Island has only two officially designated primitive campsites, one with a picnic table, but there are plenty of other good-looking sites. Long after I switch off my headlamp, I can hear the joyous sounds of Nicholas and Peter, wild savages down on the beach.

Failing Septic Systems are a pollution problem throughout the Adirondack Park, and no place is this more evident than the waters and shores of Lake George. But the Lake George Park Commission is taking a giant step to address this issue with a program that could be a model throughout the region...…Read more.