Home » Stories » Hays Brook ski: Getting back into winter 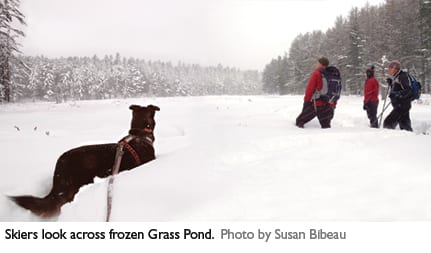 We were all happy to be on our first backcountry ski trip of the season, but none of us was as excited as Ella. She often bolted ahead of us, eager to see what snowy adventure lay around the bend, and she kept her high spirits throughout our ten-mile tour despite numerous face plants.

“I think Ella has white-nose syndrome,” I remarked after one of her plunges into the fresh powder.

“She does, but she’s not concerned about it,” Sue said.

I don’t think we hurt Ella’s feelings. She knows only a few words of English: sit, wait, lie down. Since “joy” is not part of her vocabulary, she could only act it out.

And what a stage for self-expression: fluffy snow had buried the trail to the Sheep Meadow in the Debar Mountain Wild Forest, adorned the branches of giant pines, and imposed a reverent silence on the natural surroundings. 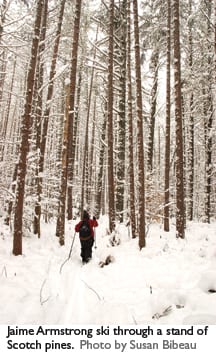 Three bipedal colleagues from the Explorer also joined me on this early-December outing: Tom Woodman, the publisher; Jaime Armstrong, our executive assistant; and of course Sue Bibeau, our designer, official photographer, and proud owner of Ella, whom she describes as “pure Adirondack mutt.”

Our objective was to ski the 3.4-mile Hays Brook Truck Trail to the Sheep Meadow (a clearing with a horse barn and two lean-tos) and make a side trip to Grass Pond via another trail. Altogether, that would give us 9.8 miles of skiing on old woods roads over gentle terrain. If you want a shorter outing, you can do a 3.5-mile round trip to Grass Pond or skip the pond and do a 6.8-mile round trip to the Sheep Meadow.

Although the trails are open to snowmobiles, the machines are seldom seen here, and the state Department of Environmental Conservation is reviewing the status of the routes. 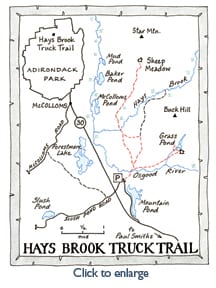 The truck trail begins on Mountain Pond Road, but in winter you probably will need to park in the horse-assembly area a few hundred yards from the trailhead. After signing the register, we glided through the woods and down a gentle grade to a bridge over the Osgood River at 0.4 miles. Just beyond the river, we turned right to take the detour to Grass Pond.

The trail begins on Mountain Pond Road, but in winter you probably will need to park in a lot a few hundred yards from the trailhead. After signing the register, we glided through the woods and down a gentle grade to a bridge over the Osgood River at 0.4 miles. Just beyond the river, we turned right to take the detour to Grass Pond.

These trails don’t need much snow to be skiable, so they’re a good choice for an early-season trip. As we approached the pond, I stuck one of my poles in the powder and announced that we had eight inches. This gave Jaime the impression that my poles have lines for measuring snow depth. They don’t, but that’s not a bad idea.

“If I ever open a ski-pole company, I’m going to make that a feature on my ski poles,” I said.

Later, Jaime came up with other ski-pole accessories that might prove useful, such as an ice scraper and a saw. I suggested a spoon, but that didn’t go over well.

The side trail climbs a hundred feet over 1.3 miles to a well-kept lean-to overlooking the small pond, which is ringed by evergreens. After visiting the shoreline, we stopped at the lean-to for a water break. While the others had brought water bottles, I had a hydration bladder.

“I hope my hose isn’t froze,” I remarked.

This led to a discussion on mixing alcohol with your water to keep it from freezing. Sue, who seemed to be an expert on the subject, recommended vodka.

“You put in a teaspoon of vodka,” she said.

“Just a teaspoon?” I asked.

“Or to taste,” Tom interjected.

Perhaps it’s a good thing we had no spirits to imbibe.

Although the climb to Grass Pond was easy, the return trip entailed some downhill coasting, and schussing under the influence is never a good idea.

Once back at the main trail, we turned right and immediately arrived at another junction. The truck trail continues straight here, but the state has created a short-cut that begins on the left and passes through a forest of tall pines. The truck trail is easier to ski, as the short-cut is narrow and has several hills (it also needs more snow). We opted to take the short-cut on the way to the Sheep Meadow and return the whole way on the truck trail. 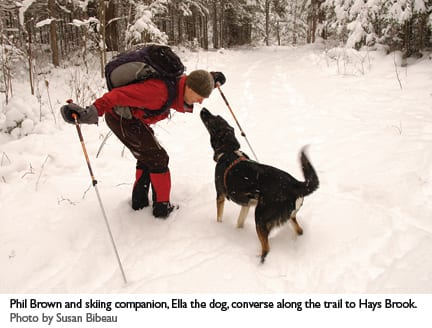 As we traversed the forest, I wondered aloud if we were skiing past white pines or red pines. Jaime, who has degrees in biology and education, told us that you can tell by counting the needles in the fascicles—the bundles of needles found on pine branches. Fascicles on white pines have five needles each, while those on red pines have only two. As it turned out, though, many of the trees are Scotch pines.

Jaime also pointed out grayish patches of crustose lichen on one tree. She noted that lichens actually are partnerships of two organisms, fungus and algae, and shared a mnemonic device that teachers use in the classroom.

“Alice Algae and Freddie Fungus took a lichen to each other.”

“Then what happened?” I asked.

“They had a symbiotic relationship.”

After nearly a mile, the short-cut rejoined the main trail. We turned left and soon came to a bridge over Hays Brook. The brook is about 1.5 miles from the register, but with the detour to the pond, we had skied 4.25 miles to get to this point.

We climbed a short hill just beyond the bridge and then continued on the flats. Within a mile, we started encountering fallen trees on the trail. Most could be stepped over or bypassed with little trouble, but one behemoth required us to wander far afield to get around it. If you do this trip and it’s still there, head to the left well before you reach the tree. 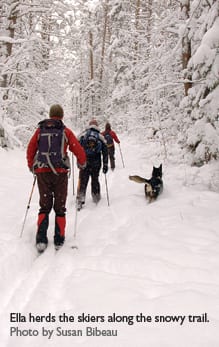 Finally, we exited the woods and crossed the Sheep Meadow, plowing through a foot and a half of snow to reach the two lean-tos and the horse barn.

Why is it called the Sheep Meadow? I checked a few history books and asked several sources but failed to get an answer.

Given our deadlines, I didn’t have time to investigate further. So if you can solve the mystery, let us know.

The meadow doesn’t offer much in the way of a vista, but it’s a serene spot to contemplate nature while enjoying a sandwich and hot cocoa (or a nip of vodka). We didn’t linger long, though, as we wanted to get moving again to avoid getting chilled.

On the return trip, we bore left when we reached the short-cut and stayed on the truck trail. Later, we came to a junction with another woods road and turned right. On your way to the Sheep Meadow, if you choose to stay on the truck trail, be sure to turn left at this junction.

In another twenty minutes, we came to a hill that descended past the other end of the short-cut. Soon we crossed the Osgood River again. We now had less than a half-mile to go. Although we had enjoyed our outing, we were happy to see the trail register. All of us were tuckered out, even Ella.

DIRECTIONS: From the intersection of NY 30 and NY 86 in Paul Smiths, drive north on NY 86 for 3.6 miles to the northern end of Mountain Pond Road. Turn right and go 0.2 miles to the horse-assembly area on the left. Park there and then ski up the unplowed road a short distance to the start of the trail on the left. Look for a gate and a trail register.