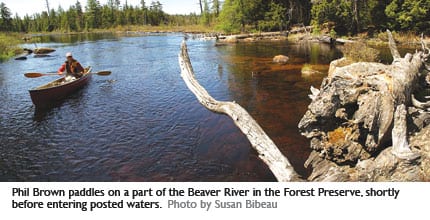 The Explorer tests the navigability of a posted stretch of the Beaver River.

The Beaver River starts at Lake Lila and flows for eight miles through largely wild country to Stillwater Reservoir, and in so doing it connects two of the Adirondack Park’s most popular destinations for canoe camping.

But you don’t have to end at Stillwater. You could continue down the Beaver through a series of smaller impoundments, linked by carry trails, until you’ve left the Park altogether.

Nor do you have to start at Lake Lila.

If I wished, I could leave my home in Saranac Lake with my canoe on my shoulders, put in Lake Flower, paddle up the Saranac River and the Saranac Lakes, paddle down the Raquette River to Tupper Lake, go up the Bog River a few miles, carry to Round Lake, paddle across Round to Little Tupper Lake, and thence hop from one small waterway to another to reach Lake Lila.

It’d be my own version of the Ninety-Miler—the Park’s most famous canoe race—starting at my house and ending somewhere near Croghan west of the Park.

There’s just one problem: the Beaver River is posted between Lake Lila and Stillwater Reservoir, and one of the landowners, who asked not to be identified, tells me the public is not welcome.

“I don’t want the public passing through,” the landowner said. “It’s an enormous liability, and the river is full of rocks. It’s navigable only for a short time during the spring. The rest of the time it’s very treacherous.”

Nevertheless, canoeists have paddled the river. One of them is Tom Kligerman. You may recognize the name: he was one of five paddlers who ventured down the South Branch of the Moose River in 1991, sparking a long court battle over paddler’s rights. That same year, Kligerman and three friends also did the Lila-to-Stillwater route. It was early May, and the water was high.

“It was a fantastic trip that day, because we were able to paddle the whole thing,” Kligerman recalled. Not once did they get out of their boats.

George Locker, a New York City attorney, made the trip a few years ago, also in May. He said he and his companions left their boats only once, to carry around part of a bridge that had fallen into the river.

Locker has no doubt that the river is “navigable-in-fact”—a legal phrase describing waterways open to the public under the common-law right of navigation. He said William Seward Webb, who bought lands around the Beaver in the late 1800s and created a wilderness estate called Nehasane Park, once contended in a lawsuit that the river was “a natural highway.” (In the suit against the state, Webb contended that raising the dam at Stillwater made some of his timberlands inaccessible.) 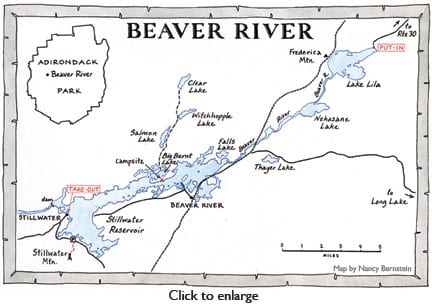 In a letter to the Explorer Locker writes: “If the original Webb told a New York court in 1893 that the Beaver River was his commercial highway beginning at Lake Lila, then it is a settled matter that the Beaver River is navigable-in-fact and accessible to the public, no matter what any subsequent owner (Webb or not) may claim.”

Two important questions to ask in determining whether a river is navigable-in-fact are: (1) Can the public access and exit the waterway without trespassing? (2) Is it navigable in the everyday sense of the word?

In the case of the disputed stretch of the Beaver, the answer to the first question is clearly yes. This part of the river begins and ends on public water bodies. To try to answer the second question, I canoed the Beaver myself this spring.

No, I didn’t start in Saranac Lake. Susan Bibeau, the Explorer’s designer, and I put in Lake Lila on a beautiful morning in mid-May. We had the whole lake to ourselves. It took us forty-five minutes to paddle to the head of the Beaver, which is Lila’s outlet.

At its start, the Beaver is maybe seventy-five feet wide and three feet deep—wider and deeper than many Adirondack streams I’ve been on. We drifted with the slow current, dipping our paddles now and then, and listened to the white-throated sparrows calling from the woods.

A quarter-mile from the lake, we passed a primitive campsite on the left. We observed several sawn logs in the water, apparently relics from the logging days. A little farther on, we skirted an alder swamp.

“I just saw a beaver or a muskrat,” Sue yelled. “It went into the water right over here.”

A mile from the lake, we came to posted signs nailed to trees: “All persons are warned against hunting, fishing, trapping or camping hereon or trespassing hereon for these or any other purpose.”

At this point, Sue turned around (she would climb Mount Frederica on the way back), and I continued the journey alone.

Just beyond the property line, I reached a short rapid that flows under the remains of a logging-road bridge. I thought about shooting the rapid (in my Royalex canoe) until I noticed part of the bridge had collapsed into the water. It looked too risky, so I carried my boat around the bridge and put back in.

In another half-mile, I encountered more rapids. I pulled out on the left and carried a short distance around them, maybe 150 feet.

As it turned out, that was my last portage. On several other occasions, however, I did step out of the canoe when it got stuck on shoals or in shallow rapids. Sometimes I’d nudge the canoe ahead just a foot or two; other times

After two and a quarter miles, the river enters Nehasane Lake near a sandy spit shaded by white pines. William Seward Webb’s descendents have summer camps in two locations on the water; otherwise, this large lake appears wild and pristine, with views all around of forested hills.

I paddled down the lake for more than two miles to the outlet. Here the Beaver is wide and sluggish, with boggy shores. Soon I passed three mounds of stones arrayed in a row across the river, perhaps the abutments of a former bridge.

Nearly six miles from Lake Lila, I came to a railway trestle, part of the line owned by the state and used by the Adirondack Scenic Railroad (see Page 14). Observing rapids ahead, I got out of the river to scout them from the tracks.

Alas, I’m not a whitewater boater. Back on the river, I glanced off a submerged boulder, paddled hard left, and struck another boulder. My canoe tipped sideways, and water started pouring over the gunwale. Suddenly, I found myself standing in thigh-deep water, watching my water bottle disappear downstream. 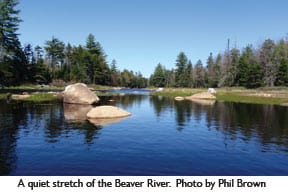 I attribute the dunking more to my inattention than to the difficulty of the rapids. They really were easy. In fact, I regarded them as nothing more than riffles—which was my mistake. After draining my canoe, I continued through the rest of the rapids without incident.

A mile below the trestle, the river flows into a pond-like expanse of flatwater created by the flooding of Stillwater Reservoir. I saw no-trespassing signs again, but these faced downriver, a warning to paddlers coming from Stillwater. I had nothing but flatwater ahead in the next two miles to the main body of the reservoir. On the way, I passed several camps on private land as well as many sun-bleached stumps of giant pines on the sandy shoreline—cut before the land was flooded..

Once on the reservoir, I beached at a state-designated campsite and decided to spend the night. Over the past six hours, I had paddled more than a dozen miles from the put-in at Lake Lila. The next morning, I canoed the final three miles to my car at the Stillwater boat launch.

So is the Beaver navigable in the common meaning of the word? True, I exited my canoe for two short carries, to escape shallows, and once to scout rapids, but the common law permits all of these activities. And the time I spent outside my boat amounted to a small fraction of my time on the river.

Later in the year, of course, the Beaver River likely would be shallower and rockier than it was in mid-May. “Wait till summer,” the landowner told me.

“There’s no water; it’s all rocks for a mile and a half.”

I’m guessing most of the river would still be deep enough to paddle, but this raises a question: what percentage of a river must one be able to paddle for it to be considered navigable?

Two experts on navigation rights—John Humbach, a law professor at Pace University, and Charles Morrison, the former director of natural-resources planning for the state Department of Environmental Conservation—said the courts have not worked out such a percentage, but judges understand that portages, shoals, and rapids often are part of the paddling experience.

“You wouldn’t be deterred from doing a long trip just because you’d have to get out of your boat a few times,” Humbach said.

Anyone who does much paddling on Adirondack rivers understands this. As a matter of fact, a few days after my Beaver trip, I spent much more time walking my boat when I canoed a wild stretch of the Middle Branch of the Oswegatchie (a stretch entirely in the Forest Preserve). 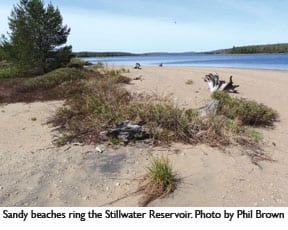 Humbach said the courts would be more apt to declare a river navigable-in-fact if it is part of a longer canoe route. Since it connects Lake Lila and

Stillwater, the Beaver River could be an essential link in a number of possible paddling trips (but you cannot picnic or camp on private land). For a one- or two-day trip, you could start at Lila and end at Stillwater, as I did. For a three- or four-day trip, you could begin on the Bog River or Little Tupper Lake. An ambitious paddler starting at Old Forge or Inlet could paddle for days, finishing at Stillwater and nearly closing a watery loop. Any of these trips could be extended beyond Stillwater. In theory, you could paddle the Beaver to the Black River and the Black to Lake Ontario.

Based on my experience and that of other paddlers, Morrison believes the public has the right to travel the Beaver. “It’s clearly navigable in the spring and possibly the fall when there’s enough water,” he said.

Humbach was a bit more circumspect, but after I recounted my trip, he responded, “You’ve described a stream that’s useful” for navigation.

DEC attorney Kenneth Hamm said he was unfamiliar with the Beaver and so could not offer an opinion. “About the only thing I can do at this point is to say the obvious: if it satisfies the common law test then it would be navigable in fact; if it doesn’t then it wouldn’t,” he told the Explorer in an e-mail.

Twenty years ago, as part of an initiative to clarify the common law, DEC compiled a preliminary list of rivers throughout the state that were thought to be navigable-in-fact. The Beaver was among them, from Lake Lila all the way to the Black River. However, the list was never subject to public scrutiny as the department abandoned the initiative to await the outcome of the Moose River lawsuit. By the time that case ended, nearly a decade later, DEC had other priorities.

However, there is a bill now in the state legislature that would codify the common law in a statute and authorize DEC to prepare a list of navigable-in-fact rivers.

As of press time, the bill had not made it out of legislative committees. “I think that its prospects are not good this year,” said Assemblyman Sam Hoyt, one of the main sponsors.

Until something gives, the status of the Beaver will remain in limbo, and the legal ambiguity likely will discourage most paddlers from using this “natural highway”—to borrow William Seward Webb’s words—between two beautiful parcels of the Forest Preserve.