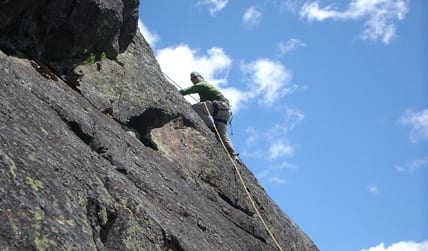 I’m lying in bed at 4:45 a.m. The alarm hasn’t gone off yet, but I won’t be going back to sleep. I’m climbing Wallface today.

For this I blame my friend Mike. We did a couple of small rock climbs last year, top-roped stuff, and right away he starts dreaming about

It may be the biggest wilderness cliff in the Northeast and we may be a couple of middle-age wannabe climbers, but, hey, we’ve got gumption.

Thankfully, we also have Don Mellor.

Mellor, the dean of Adirondack climbers, has scaled Wallface about fifty times.

At 55, he remains muscular and wiry, the perfect physique for clinging to rock walls with fingertips and toenails.

Mike, a reporter for Associated Press, had asked Don if he would guide us up the cliff. Don told us to meet him at the head of Adirondak Loj Road at 6 a.m. on the day of the climb.

It will take us thirteen and a half hours, not including the beer.

Now I’m going to tell you something you may find hard to believe. About ten years ago, Mellor and his buddy Jeff Edwards (both are teachers at Northwood School in Lake Placid) did this trip during their children’s nap times. They ran to Indian Pass from the Loj, carrying only their rock shoes, a thin rope, and a few pieces of climbing gear, completed the ascent in about thirty-five minutes, and high-tailed it off the mountain and back to the Loj. Their time: 3 hours, 14 minutes.

If you spend a day with Don Mellor, you start to see how such a thing could be possible. He’s been climbing since he was a student at the University of New Hampshire (majoring in English literature) and has lost none of his passion for the sport. This is a guy who built a climbing wall for his bedroom. And that artificial hip he got last year? If anything, it’s made him a better climber, and that’s all that matters.

I reach the Loj Road at 5:50. Mike is already there, standing next to his car. He got up at 2 a.m. to drive here from the Albany area. At 6 on the dot, Mellor pulls up in a red pickup. After greetings, we get into a discussion about helmets. I’m the only one who brought one. Mellor is not about to advise me not to wear a helmet, but he says there’s little danger of getting struck by loose rock on the route we’re planning to climb. And so I trade in my helmet for a baseball cap.

We get on the trail at 6:30 a.m., circling Heart Lake and hiking past Rocky Falls toward Indian Pass. Don is carrying a badminton racket, the better to swat deer flies.

“I think we’ll be in for some real excitement with the bugs today,” he warns his racket-less companions.

Our first stop, reached after 4.1 miles, is Scott Clearing, the site of an old logging dam on Indian Pass Brook. From the meadow, we get a clear view of the pass and the brow of Wallface. In another mile, we begin the steep ascent to Summit Rock, climbing over and around large rocks. Wallface is glimpsed through the trees. The valley below the trail is clogged with humongous boulders. We pass one that is as big as a house. I can’t get over the hugeness of the thing.

“Look at the size of that boulder!” I exclaim, more than once.

“Boulders like that are why you should wear a helmet, Phil,” Don jokes after my second or third outburst.

The artist Charles Colman Ingham also was impressed by the boulders of Indian Pass, some of which appear in the foreground of his 1837 painting The Great Adirondack Pass, Painted on the Spot.

Summit Rock, located across the pass from Wallface, offers an expansive view of the wide precipice. Don points out our route. It’s called Diagonal, after a conspicuous ledge that slants upward across the face. As Don remarks, “It’s like it’s got a big sign on it: ‘Climb here.’”

The hardest part of the climb will come after this ramp, when we must ascend a couple of steep chimneys. These pitches are rated 5.8 on a scale of difficulty that ranges from 5.0 (a steep scramble) to 5.15 (unless you’re one of the world’s best climbers, forget about it). In the old days, when the scale topped out at 5.9, a 5.8 climb was considered difficult. Given improvements in rock shoes and gear, however, Diagonal is now regarded as a moderate climb.

Still, it’s tougher than anything Mike or I have attempted.

From Summit Rock, we follow a faint path through the boulder field to a small clearing near the cliff, where we ditch our packs and put on our climbing shoes and harnesses. Don ties the ends of a pair two-hundred-foot ropes to a loop in his harness. After Mike and I fasten ourselves to the other ends, Don sets off through the woods to reach some rock ledges. We can’t see him through the trees, but when the ropes get tight, we follow.

In a few minutes, we emerge onto a ledge and catch up with Don, who anchors us to the cliff and resumes climbing. After two short, fairly easy pitches, we arrive at the Diagonal. What appeared as a linear crease from Summit Rock reveals itself as a fifty-foot-wide ramp. Eons of erosion have left the surface pockmarked, creating holds for toes and fingers. Don scrambles up on all fours, while I belay, paying out rope as he ascends. When he gets to a safe spot, he anchors himself to the cliff and belays first me, then Mike.

Since he’s above us, he draws in slack as we ascend. If either of us were to slip, the rope would be tight enough to prevent a long fall.

I’ve climbed more than twenty slides in the Adirondacks, those streaks of bare rock visible on many of the High Peaks. Most of them you can walk up, without technical gear. The Diagonal is like an especially steep slide—too steep to walk, too dangerous without a rope. But I’ve been on short sections of slides that are just as steep as this. With Don keeping the rope taut, I ascend without fear. Most of the work is in the toes, the feet. My calves are burning by the time I reach Don.

We’re now several hundred feet up the cliff, and the view is spectacular. Looking south down the pass, we can see Henderson Lake and Henderson Mountain (another remote rock-climbing destination). Also visible is the mound of tailings at the old iron mine in Tahawus.

The next pitch takes us around a bulge and close to the edge of the ramp, opening up a view of the MacIntyre Range: Algonquin, Boundary, Iroquois, and Marshall, their green flanks standing out against the blue sky.

A few hours into the climb, we reach the top of the ramp, then move sideways to a ledge. This is the start of the first 5.8 pitch. Following Don’s lead, I place my fingers in a thin crack and inch upward about six feet to a tight overhang. After a few failed attempts, I manage to squeeze past the overhang to gain a small ledge, where I rest a few minutes before struggling up a more or less vertical corner.

Don is waiting for Mike and me on a grassy ledge. Above us is the most difficult part of the climb, a seventy-five-foot ascent up another steep corner. Before making the attempt, we sit and eat lunch. Perched hundreds of feet above the valley, we take in again the view of the MacIntyre Range. During the ascent of the ramp, I had heard a high-pitched screech and turned to watch a peregrine falcon gliding past the cliff, almost at eye level. Now I see one in a dive, speeding headlong toward the earth. “Look!” I shout. But it’s too late: The falcon has pulled up without striking any prey.

The first section of the final ascent proves as difficult as advertised. I run into trouble about ten feet from the top. I’m hanging by one hand, with my feet splayed between the two corner walls and my shoulder pressed against one wall, and I’m trying to figure out my next move. The problem is I can’t, and I’m getting tired. I see a possible handhold and decide to lunge for it. I touch it, but my hand slips off, and I fall backward. Luckily, Don’s tight belay prevents me from plummeting. Needing a rest, I step on an old piton stuck in the rock (ordinarily, this would be cheating, but since I already fell, it doesn’t matter) and then make another lunge. This time I succeed, and then it’s a short scramble to the very top.

Mike starts up behind me, but I can’t see him.

“How’s he doing?” I ask Don, who is belaying at the very edge of the cliff.

“I don’t hear any grunting or groaning,” he replies.

Soon enough, Mike’s head pops up over the ledge. We made it, both of us.

The climb had taken four hours.

“How do you feel?” I ask when he anchors himself beside me.

“I feel good; we just did Wallface,” he says, taking in the vista. “Look how high we are. From this height, it doesn’t seem real below. It seems abstract.”

We’re not done yet. We still have to get down to that abstract landscape. Don sets us up for a rappel. He goes first, stepping off the edge seemingly into nothingness. When he gets to a safe ledge, he gives a shout, and Mike starts down. On the descent, things start falling out of his jacket pocket—his sunglasses, reporter’s notebook, bug dope.

“Jesus, Mike, what else do you have in your pockets?” I yell.

“That’s everything. Your sunglasses already went.”

That’s true. I had given him my sunglasses to hold during the final ascent, and he lost those on the way up.

Altogether, we rappel four times, and it eats up ninety minutes. The descent is almost as exciting as the climb, especially the second rappel—where we find ourselves suspended in the sky below an overhanging roof. There’s no other rappel like it in the Adirondacks, Don says. It certainly gives you an interesting view of Indian Pass, not to mention your mortality.

The last rappel drops us next to our packs. We change into our hiking shoes and begin the trek back to our cars. By the time we reach the trail, it’s 5:30 p.m. It takes us two and a half hours to cover the six miles to the Loj. Obviously, we didn’t break any speed records today. However, Don notes that we may have set a record for the oldest party to ascend Wallface, if you add up all our years (163).

We’ll take the honor. And the reward: sixteen ounces of warm Red Dog, downed in a dusty parking lot.

Here’s to you, guys.