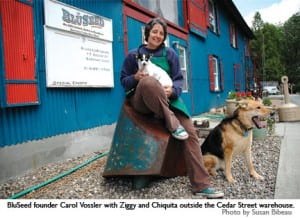 Sculptor Carol Vossler turns an a abandoned warehouse into a community treasure.

Inside the warehouse-turned-apartments-turned-warehouse (again)-turned-art gallery known as BluSeed Studios one Saturday, five people were painstakingly inserting tiny bits of lead type into metal trays. They were attending a two-day workshop on making broadsides, posters that combine art and words. Eventually, they would print their creations on BluSeed’s World War II-era Vandercook proof press, “the Cadillac of letterpresses,” as Bob Walp, the workshop leader, put it.

The students—all artists, either full-  or part-time—were spelling lines of poetry one tiny letter at a time on their metal composing sticks. It was slow work made slower because, inevitably, their row of type would fall over and they’d have to start again or they’d discover that their stick was too short to accommodate the line and they’d have to go find a longer one. 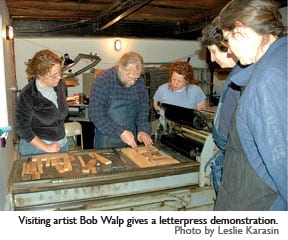 Isn’t this why God made Microsoft Word?
Carol Marie Vossler, BluSeed’s founder, laughed at the notion as she prepared her own line of type. If she had been looking for something easy to do, she would have never opened BluSeed’s doors in the first place. Located at the foot of Cedar Street in Saranac Lake, the studio opened in 2002 after a year of extensive renovation; today, the bright-blue building is a locus of North Country art. About 150 people pay $35 a year for a membership, and BluSeed regularly hosts exhibitions, classes, and concerts in its warren of galleries and studios. Two artists-in-residence live there, holed up in cramped quarters (one barely big enough for a bed) with free run of the ceramics, printmaking, frame-making, and papermaking studios on the first floor.

What’s resulted is an extension of Saranac Lake’s burgeoning arts scene, a place where artists, art lovers, musicians, and music fans can gather—a “one size fits all” type of place, said Peter Seward, an illustrator and painter who lives in Lake Placid and was at the broadside workshop. “She’s created an environment that welcomes all.”

Larry Poole, the current chairman of BluSeed’s board, agreed. “She not only welcomes you, but if you have any inclination at all, she draws you in,” said Poole, a printmaker and retired college administrator. “Carol’s energy and drive have really gotten us where we’re going. With a lot of support.”

Vossler is an unlikely impresario. The Rochester-area native graduated from Paul Smith’s College with a forestry degree in 1981 and at twenty-two got married to her college sweetheart and headed to the woods with him. “I was a logger,” she said. “I loved it. He and I ran a really nice operation.”

There are reminders of her past in the gallery, such as the bumper sticker hanging on the wall that reads, “If you object to logging, try using plastic toilet paper.” And Vossler is much more likely to wear a sweatshirt and dungarees than an all-black SoHo-style artist getup. Her husband is still in the forestry business.

Four years after graduating from Paul Smith’s, Vossler took a ceramics class at North Country Community College, and it unlocked something. She went on to take more classes at Plattsburgh State and got a master’s in fine arts at Syracuse University. By this time, she and her husband had three kids. But given an offer from an art-school friend to rent a two-thousand-square-foot studio in Manhattan’s TriBeCa neighborhood for about $600 a month, she bit.
She spent the next five years commuting between New York City and the Adirondacks.

Eventually, though, she moved back to Saranac Lake. “I wanted to come home,” she said. “My kids were playing sports; I just didn’t want to be away any more.”

Vossler had looked at another building in town for a studio, but that deal fell through. “And then friends turned me on to this building,” she said. “And I saw it and was like, ‘Oh my God, this is it.’”

The building, which sits alongside a rail line, was once used as storage for George Starks’s turn-of-the-century hardware business. Since then, it had been cut up into apartments and then turned back into storage for antiques. “It was cold and nasty and chock full of stuff,” saidVossler, who nonetheless was convinced that it would take just six months and $100,000 to fix the place up. 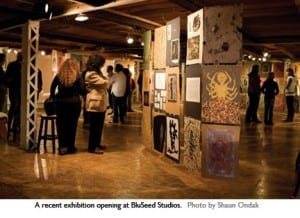 “I never did anything like this before, and it’s probably a good thing,” she said.
Although the building was a bit of a wreck, as soon as Vossler went inside, she envisioned its potential and fell in love with the place. “I saw it finished—I saw it this way when I walked in.” she said. “It was really weird. My husband turned the color of the sickly green paint that was on the building. I turned all rainbowy.”

In reality, it took three years and $250,000 (some of the money came from a business partner) to finish BluSeed. It was a struggle that required a huge community effort. Friends donated labor and expertise, and musicians played fund-raising concerts.

Six years after the doors opened, there is art in BluSeed on a daily basis.
“That’s what’s so cool, that’s why it’s tough for me to remember the low spots,” Vossler said. “I can remember when I was laying the floor upstairs, the concert floor, I was listening to A Prairie Home Companion, and I just knew that one day this place would be filled with art and music. And then last spring, Pat Donohue from Prairie Home Companion was here.”

Donohue, a guitarist whom Chet Atkins once called “one of the greatest finger pickers in the world,” joined a long list of acclaimed acts on BluSeed’s portable stage. Award-winning national acts such as the late guitarist Artie Traum, Austin-based singer/songwriter Eliza Gilkyson, and Joe Crookston, whose last CD was named 2009’s Album of the Year by the International Folk Alliance, have all appeared.

Linda Fahey, a longtime friend of Vossler’s and BluSeed’s music booker, said artists come because the space seems appealing—but get hooked once they meet Vossler. “They like it when it’s intimate,” she said of the seventy-five-seat venue. Instead of playing a bar where patrons talk through a set, musicians get an attentive audience.

The musicians also respond warmly to Vossler. “She’s an artist herself, she’s a very creative person, she’s a free spirit, and she’s fun, and I think they respect what she’s done,” Fahey said.

BluSeed is part of a trend. Other art ventures have blossomed in Saranac Lake in recent years. The Adirondack Artists Guild moved to a bigger gallery, and several artists have opened their own galleries or studios, such as Todd Smith’s 7444 Gallery and Georgeanne Gaffney’s Main Street gallery.

The primary goal of BluSeed’s artist-in-residence program is to bring art to the community. One of the requirements for residency, which costs the artists $1,000 a month if they live at the studio, is that they either teach classes or put on a public exhibition. Financial assistance is available to help the artists bear some of the costs.

Shaun Ondak, a photographer who is one of two current resident artists, opened his first-ever show in March at BluSeed. The show was a goal he set a year ago. Most of the images, long exposures of landscapes and other scenes taken at night, had never been printed, let alone shown.

“I never went to art school,” said Ondak, who works for AdWorkshop in Lake Placid. The residency gave him “an opportunity to expand myself.” And while he says he was scared to put his work on display, the warm reception he received ultimately built his confidence (so much so that he even performed music at a recent open-mic night).

“I see [BluSeed] as a big, nurturing womb. It pulls people in, and it just hugs them … it’s a family-like community,” Ondak said.

As part of his residency, Ondak expects to offer framing classes to the public.
Vossler’s devotion to BluSeed, not to mention her full-time job teaching art at NCCC, has taken time away from her own artistic pursuits, including sculpture. (Under her mentor, sculptor Don Osborn, Vossler learned to fabricate and weld steel.) But she regards BluSeed as a piece of art in itself—“my found art, my found object.”

She picked up that analogy from Dan Berggren, a musician friend, and it’s an apt one. BluSeed reflects her own artistic values as well as the community’s.
“We won’t just play anyone; it has to be someone passionate about their work, their art,” she said. “Same thing about the artists here. You don’t have to be famous; you just have to show some passion.”

That, she says, is the artist’s responsibility: to be passionate. “It also goes beyond the object,” she said. “Into remember your audience … into knowing how to communicate and speak about your work and write about your work. [Don Osborn] was always telling us to look at other artists, read what they write. If there’s something that clicks, borrow it, and then turn it into your own.”

Vossler turned the warehouse that she found into BluSeed. And then turned that into a treasure for the whole community.