Home » Stories » A chasm divides them 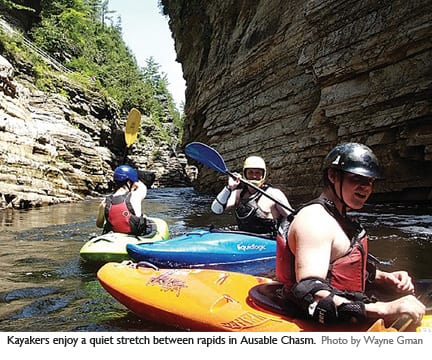 Kayakers feud with tourist company over paddling rights on the Ausable River.

For the first time ever this year, whitewater paddlers have enjoyed the right to plunge through the Ausable Chasm in the northeastern Adirondacks, testing their skills against waterfalls and rapids that had been off-limits.

“Coming over that first drop, you’re entering this magical place,” said Andrew Ludke, a kayaker from Pennsylvania who was one of the first to make the run. “You pit your personal skills against that of the river and that of the natural environment.”

The chasm is one of the most captivating places in the Park. The privately owned sandstone gorge channels the Ausable River into a narrow defile. In places, fern-clad rock rises more than a hundred feet above the flume. Part of the route is open to tourists who pay the operator a fee to float a stretch of flatwater on inner tubes or rafts.

But a national group called American Whitewater fought for years in court to win access to far more aggressive and dangerous stretches of the river (rated as high as class 4 and class 5, the high end on the whitewater scale of difficulty).

This spring, under a settlement with the New York State Electric and Gas Company and the Federal Energy Regulatory Commission, an access route was finally opened for kayakers, with a put-in at the Rainbow Falls dam. 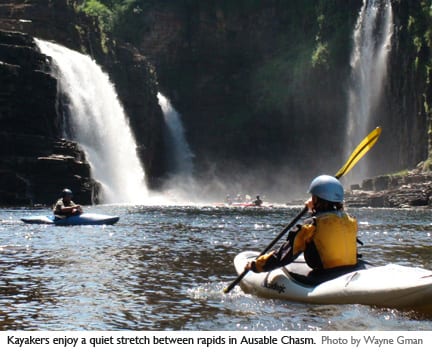 The president of the Ausable Chasm Co., John McDonald, opposed the decision and thinks boaters don’t have any business running the rapids, especially where flanked by his land. “Personally, no, I don’t, because of the safety factor,” he said. “We had a fellow jump in the chasm from the bridge a few years ago, and the State Police diver almost drowned trying to find his body.”

McDonald concedes that the courts have spoken, giving paddlers the right to run the rapids for four months out of every year. But he worries that an accident would force his tourist attraction to close for days, even weeks. “If they shut it down, we don’t have any income,” McDonald said.

On the first day of the inaugural paddling season, tensions between McDonald’s employees and paddlers were running high. Ludke and other kayakers contended that the workers were stalking the banks and harassing them.

“They were telling us that if we put a foot on dry rock that we would be cited,” Ludke said. “They were taking pictures of us, and they were radioing to the police.” 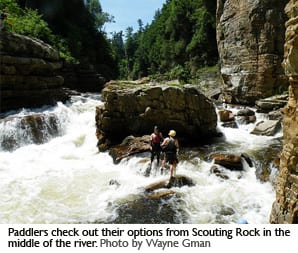 Based on the company’s complaints, state troopers filed “a request for a criminal summons” against three paddlers with Chesterfield Town Court, according to State Police Captain Brent Gillam.

One paddler said on the Northeast Paddlers Message Board, an online forum, that he and two companions had entered private land after encountering a rope on the river.

“We were used to ropes meaning some type of warning down river,” the kayaker said. “We ventured onto private land.

We asked the first staff member we saw, and went back. We were stopped by a cop when we were back in the water.

After discussion and some waiting we were given violations.”

Tim Bresett, Ausable Chasm’s general manager, contended the paddlers were taking a shortcut across the company’s land. “They were a half-mile from the river,” he said. “They were not scouting.”

Bresett also contended that many of the kayakers who ventured down the chasm on the opening weekend were unskilled and unprepared for expert-class water. “I guarantee somebody will die on the river this year,” he said.

Because the troopers did not witness the alleged trespass, Gillam said, it was up to the court to decide whether to pursue charges against the paddlers. The court clerk told the Explorer that the charges were eventually dismissed. Gillam said he thought that was the right decision. “It’s not something I would be interested in pursuing, based on the federal court cases,” the captain said.

No confrontations have been reported since that first weekend, but tensions and distrust remain high on both sides. Still, all parties say they will learn to co-exist peacefully. “Legally, they do have a right to go through the river,” acknowledged McDonald. “They also have the right to portage [around obstacles] and the right to scout.”

“If everyone works together … it could benefit the local community,” Jared Hogle, a Plattsburgh resident who volunteers for American Whitewater, said in an interview with the Adirondack Daily Enterprise.

The debate on the Ausable mirrors a broader fight over which rivers that cross through private land should be open to public navigation.

In 1998, the Court of Appeals, the state’s highest tribunal, ruled that recreational paddlers have the right to travel on any waterway deemed “navigable in fact.” Such a waterway, the court said, “is considered a public highway not withstanding that its banks and bed are in private hands.”

But disagreements remain over the meaning of the decision and which waterways are open to the public. For example, as reported in earlier issues of the Adirondack Explorer, landowners dispute the public’s right to paddle on stretches of Shingle Shanty Brook and the Beaver River.

There are no longer such questions regarding the Ausable Chasm. Under the federal agreement, the river will be open to paddlers each year from Memorial Day weekend through October 31.

Andrew Ludke says the legal fight was worth it and shrugs off the suggestion that the chasm is dangerous, despite the fact that he broke a bone in his hand when he struck rock during his first descent.

“This is a deep, fantastically beautiful natural environment that is just alluring,” he said. “Why would we not want to paddle there? It’s just a fabulous place.”