We took advantage of fall sunshine yesterday to climb the historic Wiessner Route on Upper Washbowl Cliff with Matt Wiech, a guide with the Eastern Mountain Sports Climbing School.

Fritz Wiessner, a top climber in his day, put up the route in 1938. Like most of his routes, this one is regarded as moderate in difficulty, but it’s great fun, with interesting problems, thrilling exposure, and spectacular views of Chapel Pond Pass and the Great Range.

The crux (hardest part) comes at the very beginning when climbers have to squeeze past and then surmount a rectangular block. This pitch is rated 5.6 on the Yosemite Decimal System scale, which is pretty easy by today’s standards, but the pitch would have been a lot harder in Wiessner’s era, when climbers wore mountaineering boots instead of sticky-soled slippers. In fact, one of Wiessner’s partners, M. Beckett Howorth, avoided the block altogether, according to the guidebook Adirondack Rock.

“Having observed his labors in circumventing the block, and being naturally lazy, I found a way to traverse from the sloping slab to the top of the block, thereby avoiding the crack, much to Fritz’s disgust,” Howorth wrote of the climb.

Wiech got over the block so easily that I have no doubt he could do the route in mountaineering boots if he chose. I managed it, too, though with not nearly as much finesse.

The second pitch is considerably easier (rated 5.4): we ascended a wide chimney-like feature with generous footholds and handholds. This led to the start of the Slanting Ledge, a wide ramp that bisects the cliff. We more or less walked along the ramp for 150 feet to the base of a right-facing corner. For the finish, we ascended a crack in the corner. This pitch is only thirty-five feet and is rated 5.5.

Wiessner pioneered dozens of routes in the East and indeed throughout the United States and Canada. In the Adirondacks, his route on Chapel Pond Slab, called Empress, is a classic. Adirondack Rock awards it five stars, its highest rating for the overall quality of a climb. The book gives only three stars to the Upper Washbowl route, but Wiech likes it just as much, if not more, than Empress—in part for the magnificent views. “It’s a treat anytime you get to climb this cliff,” said Wiech, who often takes clients here.

Click on the video below to listen to Wiech talking about the route at the end of the climb.

Incidentally, another EMS climbing guide, Will Roth; his friend, Monique Wicks; and Josh Wilson, a photographer, were climbing ahead of us on the route. Look for Josh’s photos in a future issue of the Adirondack  Explorer. 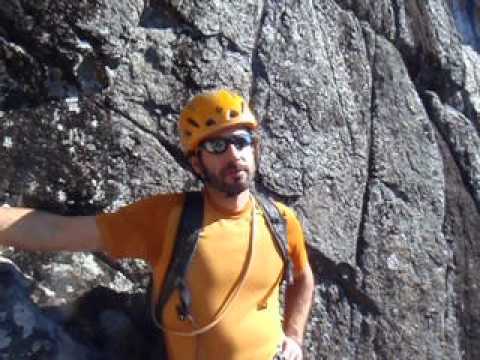