Although you can’t learn rock climbing from a book, you’ll find a lot of rock-climbing manuals at EMS in Lake Placid, the Mountaineer in Keene Valley, and other outdoors stores. These books are no substitute for experience, but they do reinforce lessons you’re likely to hear from professional guides and veteran climbers.

I own several such books. One of my favorites was written by Lake Placid’s own Don Mellor: A Trailside Guide: Rock Climbing, published by W.W. Norton & Co.

Recently, I finished a classic of the genre, Basic Rockcraft by Royal Robbins, from way back in 1971.

Royal Robbins ranks among the giants in the annals of climbing. He made his reputation pioneering big-wall climbs in Yosemite and elsewhere. In 1957, to name just one feat, he and two others made the first ascent of the northwest face of Half Dome. It took them five days. Following the onset of arthritis in the late seventies, Robbins retired from serious climbing and took up adventure kayaking. He also founded an apparel company.

Much of the advice about climbing technique in Basic Rockcraft remains as sound as ever. However, I was struck by how much the equipment has changed.

Shoes. In the photos in the book, Robbins and other climbers wear what appear to be hiking boots and socks. For all I know, these may actually be the rock-climbing shoes of the day, for he discusses the advantages of specialized rock shoes and notes that some of them have cleats. In any case, the boots in the photos are a far cry from the sticky-sole slippers favored by climbers today. 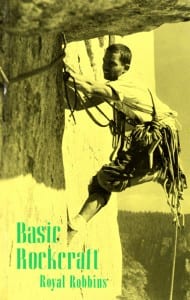 Harnesses. Robbins did not enjoy the comfort and security of a manufactured harness. Instead, he wrapped webbing (flat rope) around his waist and tied loops for his thighs, creating a proto-harness known as a “Swami belt.” He also used webbing to create seat slings for rappels.

Belay devices. Modern climbers feed the climbing rope through metal belay devices when belaying or rappelling. These devices generate friction to stop a fall or control a descent. Lacking such devices, the climbers in Robbins’s day generated friction by wrapping the rope around their bodies and sometimes feeding it through stacked carabiners as well.

Helmets. In his discussion on equipment, Robbins nowhere mentions helmets, and the climbers in the photos do not wear them.

Chalk. Nor does he mention chalk, which is ubiquitous today. Climbers use chalk to keep their palms and fingers dry.

Pitons. A piton hammer and pitons were still part of the essential equipment. Robbins lists five types of pitons and describes how to place and remove them. At the same time, more benign forms of protective anchors were coming into use, namely, artificial chockstones, or nuts, that could be wedged into cracks. Robbins advocated using nuts over pitons whenever possible. They don’t deface the cliff, he said, and offer the climber greater satisfaction: “the silent communion between man and rock, the feeling that one is with the rock, the greater sensitivity to its minute variations and configurations, the knowledge that one is not violating the rock, smashing it with pitons.” His defense of “clean climbing” helped changed the sport. There are now a wide variety of nuts and camming devices on the market.

All of the equipment innovations since the publication of Basic Rockcraft have served to make climbing easier and safer. In Robbins’s era, a difficult climb would be rated 5.9 or perhaps 5.10 in the Yosemite Decimal System. Nowadays, the best climbers have managed to do routes rated as high as 5.15, which once would have been considered impossible. But could they do them in hiking boots?

Did you ever climb with the old equipment? If so, we’d love to hear about it. How much have equipment improvements changed the sport and made climbing easier?