After coming to the Adirondack Explorer a decade ago, I developed an interest in Bob Marshall, the legendary hiker and wilderness conservationist. Bob, whose family had a summer camp on Lower Saranac Lake, was the first to climb the forty-six High Peaks (accompanied by his brother, George, and their guide, Herb Clark), and today one of those peaks, Mount Marshall, is named after him. 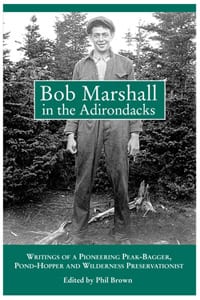 Bob later went on to help found and finance the Wilderness Society. He did a lot of other interesting stuff, such as explore and map arctic Alaska, compile a catalog of the nation’s largest roadless areas, and work tirelessly as a federal bureaucrat for the preservation of wild lands throughout the country. The Bob Marshall Wilderness in Montana is named after him, as is a lake in Alaska. The Adirondack Council wants to establish a 409,000-acre Bob Marshall Great Wilderness in the region south of Cranberry Lake.

A few years ago, I compiled Bob’s Adirondack writings (with a few other pieces) in an anthology titled Bob Marshall in the Adirondacks: Writings of a Pioneering Peak-Bagger, Pond-Hopper and Wilderness Preservationist. The writings include the Adirondack Mountain Club’s first guidebook–a pamphlet describing and rating the views from the High Peaks.

As an offshoot to the book, I put together a digital slide show of Marshall’s life, which I have given all over the state (including at the storied Explorers Club in Manhattan). The show features numerous photos taken of and by Marshall, including some of the earliest color photographs of the Adirondacks.

I’ll be giving the show (and signing books) at the state Visitor Interpretive Center in Newcomb at 7 p.m. Thursday, as part of the Huntington Forest Lecture Series. Admission is free. I hope to see you there.