We just finished our March/April issue of the Adirondack Explorer, so I took Tuesday off to go backcountry skiing and take advantage of the recent snowfalls (before a looming thaw sets in).

My neighbor Tim Peartree and I skied through two mountain passes. The first, Avalanche Pass, is one of the most popular ski trips in the Adirondacks. From Heart Lake, it’s about four miles to the top of the pass and an additional 0.6 miles to Avalanche Lake.

If you do the trip, I highly recommend you visit the lake. It’s one of the scenic wonders of the High Peaks, with the sheer rock walls of Mount Colden rising straight out of the water (or ice). I’d suggest you ski at least as far as the Trap Dike, a large gash in the side of Colden that ice climbers often use to reach the summit. For a longer trip, and more spectacular vistas, you can continue to Lake Colden.

When Tim and I reached Avalanche Lake we encountered fierce winds, the strongest I have experienced there. (The National Weather Service predicted 60-mph gusts on Mount Marcy.) The snow was blowing horizontally, and the wind chill was downright dangerous. We turned around almost immediately.

The highlight on the return trip is the 430-foot descent from the top of Avalanche Pass to Avalanche Camps near Marcy Brook. You descend via a ski trail that winds down the slope, crossing the hiking trail twice. Conditions on the ski trail (as well as the other trails we used) were excellent: packed powder, but not slick.

Upon returning to Marcy Dam, we climbed to the pass between Wright Peak and Whales Tail Mountain. Again, we were on a ski trail that entailed about four hundred feet of ascent. Whales Tail Pass is not skied as often as Avy Pass, but it has been getting use. Previous skiers had created a trough with their tracks, but on the descent we were able to make fresh tracks in the deep powder on the sides.

The Whales Tail Ski Trail ends at the Algonquin Peak hiking trail. From there, we returned to the Loj via the Old Marcy Dam Trail.

The tour took about five hours. All in all, a great day of skiing in the woods. We wanted to get out while we could, because the Weather Service is predicting rain and freezing rain on Friday (with a high near 43).

Incidentally, both ski trails require at least intermediate skills. For those curious about the Avalanche Pass Ski Trail, I made a video of our descent, following Tim the whole time. The descent took about five minutes. 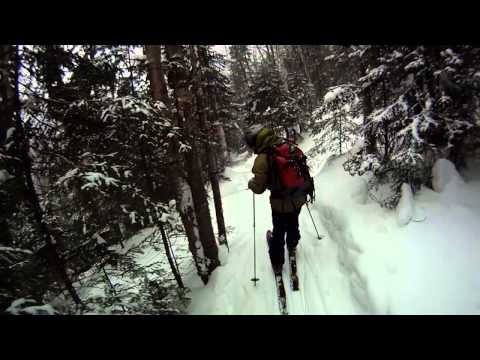