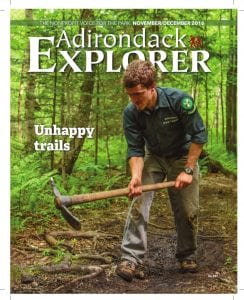 The Adirondack Explorer‘s November/December issue is in the mail, but Mike Lynch’s story on deteriorating trails in the High Peaks is already gaining attention on the Adirondack Almanack, the Explorer‘s online journal.

The article, headlined “Trails showing their age,” notes that a combination of poor design and heavy use has led to severe erosion on trails. Older trails tend to go straight up a slope. In some cases, erosion can be mitigated by rerouting the trails to create switchbacks. Unfortunately, at higher elevations, where the soil is thin, cutting into the slope to create switchbacks may not be possible.

In a comment on the Almanack, Tony Goodwin says the Adirondack Trail Improvement Society, which he heads, is trying a new approach: “Switchbacks are great when they can be done, but as one goes higher up the mountain the soils become thinner with nothing but smooth steeply-sloping bedrock underneath. ATIS has been experimenting with drilling small holes in bed rock and setting tread on those pins – a technique that may permit more switchbacking going forward while also replacing wooden ladders and staircases in some places – e.g. the Orebed trail.”

Goodwin refers readers to photos of the Beaver Brook Trail on Mount Moosilauke in New Hampshire to see what these pinned steps look like. One of these photos is shown below.

What do you think of this idea? If you have an opinion, we encourage you to read Mike Lynch’s story on the Almanack and join the conversation. 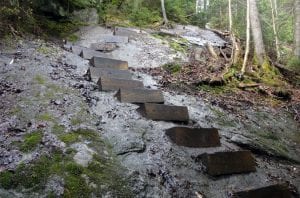 You’ll also find in the November/December issue of the Explorer three stories relating to the Boreas Ponds Tract: an explanation of the Adirondack Park Agency’s four options for classifying the tract, a description of hiking opportunities near Boreas Ponds, and an account of rock climbing on Ragged Mountain, which is on the tract.

Brian Mann provides an update on the controversial Adirondack Club and Resort development in Tupper Lake. Although the project was approved several years ago, the developers have yet to begin construction and have yet to obtain key permits.

Mike Lynch writes about a rash of bear encounters in the Adirondacks. The dry summer and a shortage of berries may be partly to blame.

Bill McKibben turned in a story on Steve Ovitt, a retired forest ranger who is building trails in the North Creek area with the aim of connecting the community to the wilderness that surrounds it.

We provide an explanation of Protect the Adirondacks’ lawsuit against the state over the construction of wide, graded snowmobile trails in Forest Preserve. It could create an important legal precedent.

Historian Philip Terrie reviews Half-Earth: Our Planet’s Fight for Life, in which the renowned scientist E.O. Wilson warns that we humans need to protect wild lands to prevent a mass extinction of species.

These are just some of goodies in our latest issue. If these pique your interest, please consider subscribing.