Home » Outtakes » Negro Brook Has It All: Thickets, Blowdown, Rapids

The Bloomingdale Bog Trail starts near Saranac Lake and ends eight miles later near Onchiota. Following an old railroad bed, it is ideal for jogging or mountain biking. I recently went to the trail with a different purpose in mind: canoeing.

This is an idea I had for a while. Negro Brook flows under the Bloomingdale Bog Trail in several places. I had never heard of anyone canoeing this part of Negro Brook, but the stretches visible from the trail looked navigable. Nevertheless, I figured I should do the trip when the water levels were high.

The water was plenty high this past Thursday. I put in the brook from Merrill Road, a dead-end dirt road, and took out in Bloomingdale, a journey of about seven miles.

Negro Brook passes through a flatland known as the Oregon Plains. I expected to spend a few hours on a placid stream meandering through alder swamps. In fact, I did spend most of my trip among the alders. They were so thick in places that I had resort to pulling myself through by grabbing branches. I also passed through balsam forests, where the obstacles were not thickets but fallen trees.

What surprised me most was the frequency of rapids. I encountered the first almost immediately after launching my canoe. After passing under the trail for the first time, I encountered more than a half-dozen others. As rapids go, these would be considered easy, probably class II on the American Whitewater Association’s scale of difficulty. Unfortunately, some of the rapids were partially obstructed by blowdown, forcing me to carry around.

Shooting the rapids was fun, but I had some cause for concern. I was paddling a lightweight, carbon-fiber boat, not the sturdiest vessel for whitewater. And I’m by no means an expert on whitewater. When I hesitated before one drop, my canoe swung sideways and got pinned against a rock. When I tried to pry it loose, it cracked. Luckily, the canoe remained seaworthy, but I had to convert my water bottle into a bailing can.

In four miles or so, I reached an old bridge on Bigelow Road. Although the bridge is out, people still drive down the road, as evidenced by the beer cans and other trash in the vicinity. What a contrast to the virtually pristine wild in which I had just been immersed.

Shortly, I passed under the trail again and continued meandering through alders. In a quarter mile, I entered a wetland of grassy tussocks that afforded a clear view of Whiteface Mountain to the southeast.

Negro Brook eventually merged with Two Bridge Brook, which in turn later merged with Sumner Brook. I exited Sumner on Oregon Plains Road, just before some rapids. Given the obstacles and difficulties I encountered, the trip had taken substantially longer than I expected. But I was glad to have done it. It satisfied my curiosity and reminded me that wilderness, even close to roads, can be a tough place. I’ll write a full account of the trip in a future issue of the Adirondack Explorer.

Incidentally, as I left the stream, I met two local paddlers—Jon Norman of Saranac Lake and Scott McKim of Gabriels—who were preparing to put in the brook. Their plan was to run the rapids on Sumner to the Saranac River and then paddle the Saranac through the heavier whitewater of Permanent Rapids. I took the short video below from the road. 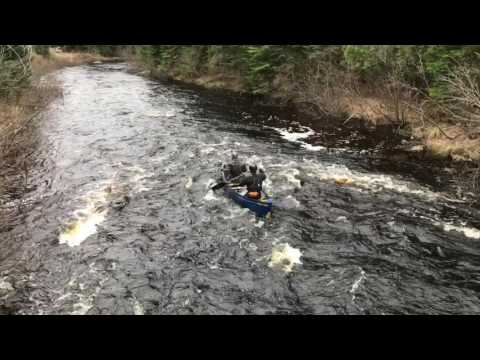