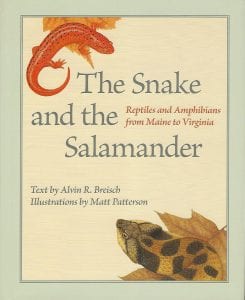 In a review for the Adirondack Explorer, Ed Kanze wrote that The Snake and the Salamander, a wonderfully illustrated book about reptiles and amphibians, “not only abounds in solid science, but it does so with contagious passion.”

His opinion proved to be spot on: the book recently won the National Outdoor Book Award in the nature and environment category. The annual awards are sponsored by the National Outdoor Book Awards Foundation, the Association of Outdoor Recreation and Education, and Idaho State University. It was the first book published by Johns Hopkins University Press to win one of these awards.

The author, Alvin Breisch, has a long connection to the Adirondacks. He first visited the Adirondack Park with the Penn State Outing Club in the mid-1960s. At the time, he and other students were helping Trudy Healy research the region’s first rock-climbing guidebook. Along the way, he took part in an early ascent of Diagonal on Wallface—one of the longest and best rock routes in the Park.

Breisch later worked at Johns Brook Lodge, the Adirondack Mountain Club’s hut amid the High Peaks. After earning a bachelor’s degree in botany, he enrolled in a master’s program at the University at Albany and wrote his thesis on Whiteface Mountain’s plant life.

Breisch went on to a 28-year career at the state Department of Environmental Conservation, where he became a specialist in herpetology—the study of reptiles and amphibians. He retired in 2009.

He said the book award came as a complete surprise. “I didn’t realize we had been nominated,” he said. He added that the illustrator, Matt Patterson, shares much of the credit. “I think it’s a lovely book. We’ve gotten a lot of compliments,” remarked Breisch, who has a cabin in the southern Adirondacks.

One of the 83 species featured in the book is the mink frog, which often dwells in Adirondack beaver ponds. Though it’s not on the state’s list of endangered species, Breisch told the Explorer that the mink frog may vanish from the state later this century.

“With climate change, probably in the next 75 years we’re going to lose the mink frog,” he said. “It doesn’t reproduce in areas that have warm summers; it needs colder summers.”

Some Adirondack plants and animals that prefer cooler habitats will be able to move upslope as the climate warms, but that’s not an option for the mink frog: beavers rarely build dams (and create ponds) at higher elevations in the park.

Click here to read Ed Kanze’s review of The Snake and the Salamander: Reptiles and Amphibians from Maine to Virginia.