Several years ago, we asked Bill McKibben to ski the entire Jackrabbit Trail in a single day and write about it. Saranac Lake to Keene. That’s twenty-four miles, but that wasn’t enough for McKibben.

When he turned his story in, I learned he started instead at Paul Smith’s, where there is an orphan piece of the Jackrabbit. By following this trail and then a railroad bed, he was able to make it to Saranac Lake and add ten or eleven miles to the trek.

Why extend an already-lengthy trip by slogging along a boring railroad track? I thought Bill must be a bit nuts, but now that I’ve read Long Distance, I understand where he’s coming from. 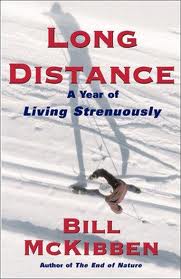 Long Distance chronicles McKibben’s yearlong quest to become the best Nordic ski racer he could. He trained like a pro, working out for hours each day, and competed on three continents. Originally published in 2000, the book was reissued in paperback by Rodale in 2010.

Early on, McKibben visits the Olympic Training Center in Lake Placid to undergo a series of unpleasant tests involving a treadmill, a snorkel-like device, and numerous blood-lettings to ascertain his VO2 Max—a measurement of how efficiently his body uses oxygen. The tests reveal he has a higher-than-average VO2 Max, but it’s still far below that of elite athletes. And no amount of training will change that. The upper limit of his VO2 Max and thus of his competitive potential are determined by genetics.

It is not McKibben’s destiny to become a champion. Nevertheless, he diligently puts in six hundred hours of training over the year, all to prepare for a grand total of maybe twelve hours of racing. In one event in Lake Placid, he manages to come in first in his age group, but usually he’s closer to the middle of the pack.

What’s the payoff then? McKibben describes the “absolute immersion in the present” that he feels during a fifty-kilometer race in Ottawa, when all the cares of modern life fall by the wayside. “Everything really had come together for a moment,” he writes. “Or perhaps a better way to say it is that everything had disappeared.”

McKibben, of course, is best known as an environmental writer, the guy who sounded the alarm about global warming in The End of Nature and who founded a worldwide movement to try to get politicians to do something about it. When I saw him speak in Saranac Lake, he struck me as an Old Testament prophet with a sense of humor.

Long Distance reveals the private side of the public intellectual. Despite all his accomplishments—as a Harvard graduate, staff writer for the New Yorker, best-selling author, and global activist—McKibben still longs to be what so many males long to be: an athlete. Growing up, he felt like a wimp, because he wasn’t much good at basketball, hockey, baseball, or the other crucibles of boyhood. He writes that “gym became a recurring bad dream, highlighted each year by the President’s Physical Fitness Test, when I got to prove to myself that I still couldn’t do a pull-up.”

He feared he didn’t measure up to his athletic father, who went out for baseball and climbed mountains in his youth. Bill gravitated toward intellectual pursuits. When still in high school, he covered the school’s basketball team for the local paper. His father picked him up after the games. “He was proud of me, I knew, but I think some part of me always wondered if he’d have been prouder had I been out on the court myself,” he writes.>

Part way through his training year, McKibben receives word that his father has a malignant brain tumor. He spends the next several months shuttling between Vermont, where he lives, and Boston, where his father is dying. He continues to exercise and ski, when possible, but the ordeal of watching his father deteriorate, physically and mentally, puts cross-country skiing into perspective. Training for a race becomes a metaphor for training for life. Our real tests are the difficulties thrown in our path—depression, illness, the demands of human relationships.

“The most profound test, of course, is the last one, dealing with your death,” he says. “But if you’ve done the training, the race will take care of itself—or so it seemed, watching Dad.”

After his father’s death, McKibben travels to Norway with his wife, Sue, and their daughter, Sophie, to enter one last competition, the Birkebeiner, a grueling fifty-eight-kilometer race that attracts several thousand serious skiers each year. He’s happy to finish in the middle of his age group.

“The next morning dawned clear and cold, so Sue and Sophie and I went for another ski,” he says. “For the first time in a long time, it meant nothing at all, and that was nice, too.”

Don’t expect to find lots of tips about wax, poling technique, and such in Long Distance. You’ll learn more about life than about skiing. It’s a pity that such an insightful book is marred by typographical errors. I found twenty or so after I started keeping track.