If you’re used to running on roads, you should try running on a wilderness trail. There’s something atavistic about racing through the woods that appeals to our primal nature.

Trail-running shoes differ from ordinary running shoes in that they usually have stiff, knobby soles to protect against sharp rocks and provide better grip.

A few years ago, I had a chance to test the La Sportiva Raptor. I put about 130 miles on the shoes and loved them. I used them not only for running, but also for some all-day outings that combined approach runs with mountain climbing. My feet always felt comfortable, even after a long day. 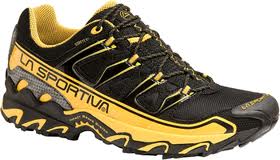 The Raptor soles are made of FriXion, a sticky rubber that La Sportiva also uses in its approach shoes. The stickiness improves your purchase when your foot is landing on or pushing off from a rock—a common occurrence on Adirondack trails. The soles also are good at absorbing shock.

I became convinced of the versatility of the Raptors on a jaunt to the summit of East Dix, one of the Adirondack High Peaks. The route follows an unmarked herd path for more than four and a half miles to the base of a bedrock slide that leads to the summit.

For the first three miles or so, the trail stays on gentle terrain and is wonderful running. After this, the trail gets rocky, muddy, and often steep as it ascends a small valley, crossing a brook several times. I hiked most of this stretch.

Next came the slide, which is more than a half-mile long. It varies in steepness, depending on your route. I had climbed it before in hiking shoes, but I felt much more secure in the sticky Raptors. I walked right up most of the slide, occasionally using hands. Just below the summit, the slide got steeper, and I engaged in a bit of fourth-class climbing.

The round trip was about 10.7 miles and took most of the day. I had pressed the Raptors into service as running shoes, hiking shoes, and low-angle climbing shoes, and they performed superbly. I’m not suggesting you should use the Raptors as a hiking shoe, but they fit the bill when needed.