The Adirondack Mountain Club has issued a supplement to its Adirondack Trails: Eastern Region guidebook that can be downloaded for free from its Web site. 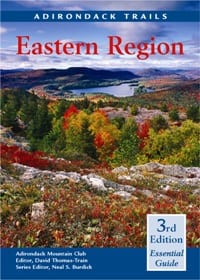 The supplement describes twelve additional hiking trails in ten locations within the region, which includes Lake George and the Champlain Valley.

Perhaps the most exciting addition is the 2.6-mile trail connecting the scenic summits of Thomas and Cat mountains on the west side of Lake George. Both mountains belong to a preserve owned by the Lake George Land Conservancy.

Other additions include the new trail up Poke-o-Moonshine Mountain and trails at five Wildlife Management Areas, Noblewood Park in Willsboro, and the Crown Point State Historic Site. The supplement also describes 123-acre Schuyler Island, which lies about a half-mile off Lake Champlain’s western shore. It can be reached by a 1.5-mile paddle.

Both the Eastern Region guidebook and the supplement were written by David Thomas-Train.

Hard copies of the supplement may be purchased for $1 at ADK’s facilities in Lake George and at Heart Lake. The full guidebook sells for $19.95.