At one point, he showed a photo of Fishhook Arete, a narrow, curving ridge on Mount Russell in California. At 14,086 feet, Russell is one of the highest mountains in the Sierra Nevada, so you wouldn’t expect an eight-pitch rock climb that ends on its summit to be a walk in the park. Indeed, the climb itself takes five to seven hours. With the approach and the descent, the trek can take fifteen to twenty-one hours, according to the SuperTopo website.

Beckey allowed that he hasn’t done the whole route. “It’s still on my tick list,” he remarked. 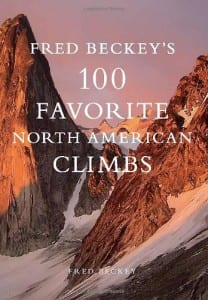 This is where we point out that Fred Beckey is ninety years old.

Beckey, who grew up and still lives in Seattle, started climbing as a teenager, and he’s still at it. He is thought to have put up more first ascents—both rock-climbing and mountaineering—than anyone in history.

His slide show covered his climbs in the Sierras, the Rockies, Cascades, Tetons, western Canada, and Alaska, among other places. In one video, shot before the advent of sticky-soled climbing shoes, he is shown ascending a steep route in Keds sneakers. “They really worked pretty well,” he said.

The presentation was loosely based on Fred Beckey’s 100 Favorite Climbs, a gorgeous coffee-table book published in 2011 by Patagonia Books ($79.95). It’s beautifully designed, with large color photographs and hand-drawn climbing maps. Beckey is a fine writer. In each chapter, he recounts the history of the route, captures the allure of the climb, and provides useful information for those who want to do it. The book is a delight to flip through even if your only intention is to enjoy these routes vicariously.

At the end of his show, Beckey put up on the screen a well-known photo of him hitchhiking with a cardboard sign that says, “Will belay for food.”

“If you see this guy on the road, don’t stop,” Beckey warned.