The history of Finch, Pruyn & Co. and its paper mill in Glens Falls is intertwined with the history of the Adirondack Park. Two years ago, the company sold all its lands, more than 160,000 acres, to the Nature Conservancy and its mill to Atlas Holdings. Much of the land is expected to added to the state Forest Preserve. 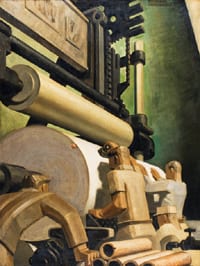 The Hyde Collection of Glens Falls will soon be exhibiting a piece of Finch, Pruyn’s history. The museum just announced that it received an oil painting by Douglass Crockwell titled Paper Workers, Finch Pruyn & Co. The artist, who died in 1968, was the first director of the Hyde Collection and an illustrator for such magazines as Saturday Evening Post, Life, Look, and Esquire.

“This painting is a remarkable example of his endeavor as a fine artist–long before he became the famous illustrator of the 1940s and ’50s,” said Erin B. Coe, the Hyde’s chief curator. Done during the Depression, the oil painting shows two men at work, closely watched by a supervisor.

The painting was donated to the museum by Mr. and Mrs. Samuel P. Hoopes of Bolton Landing. It will be sent to the Williamstown Art Conservation Center for cleaning and other treatment and before it’s put on display.

It’s uncertain when the painting will be returned to the museum,but Coe’s best guess is that it will be eight months to a year.