Wright Peak in the MacIntyre Range has a reputation as perhaps the windiest of the forty-six High Peaks. I’ve heard this is because the winds funnel through Avalanche Pass. That sounds plausible, but I can’t vouch for the theory.

What I can tell you is that several years ago I climbed Wright in winter and encountered such a fierce wind that I had to crawl part of the way to the open summit.

On Sunday, another windy day, I climbed Wright with five others. It was raining when we set out from Adirondak Loj, but the forecast called for the weather to clear in the early afternoon.

We started up the Old Marcy Dam Trail, cut over to the Algonquin Peak Trail, and reached the 0.4-mile spur trail to Wright Peak about 11:30 a.m. A summit steward at the junction warned us that the top would be cold, rainy, and windy–with 50-mph gusts.

We decided to have an early lunch in hopes that the wind and rain would abate before we headed to the summit. It didn’t. We pushed upward and soon reached timber line. The wind was so brutal that only three of us continued. The others chose to wait in the shelter of the trees.

I was one of the three. The others were Philip Brittan and his daughter, Leyla, who was climbing her first High Peak.

Getting to the summit was a bit of struggle. We leaned into the wind, sought refuge behind boulders, fought to maintain our footing. But we got there. I took the accompanying video of Philip on the summit. It gives you an idea of what the wind was like.

Usually, Wright offers a gorgeous panorama, but on this overcast day we couldn’t see much. Nevertheless, we three agreed that the experience of being in 50-mph winds was strangely  exhilarating. We had felt the raw power of nature, and there was a kind of beauty in that.

To top it off, as we made our way back down, the sky did start to clear. It turned out to be a gorgeous day. 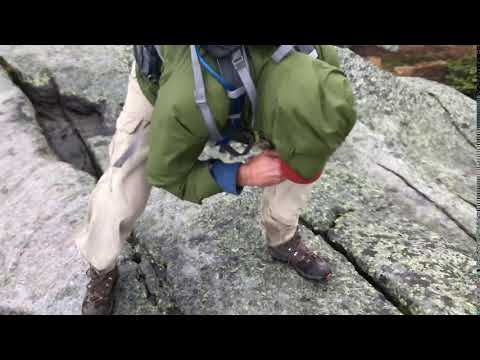