The state Department of Environmental Conservation hopes to reconstruct this fall the popular boat launch at Second Pond, which gives boaters access to the Saranac Lakes State Campground.

DEC plans to replace the existing boat ramp, build a separate facility for canoes and kayaks, and provide additional parking. 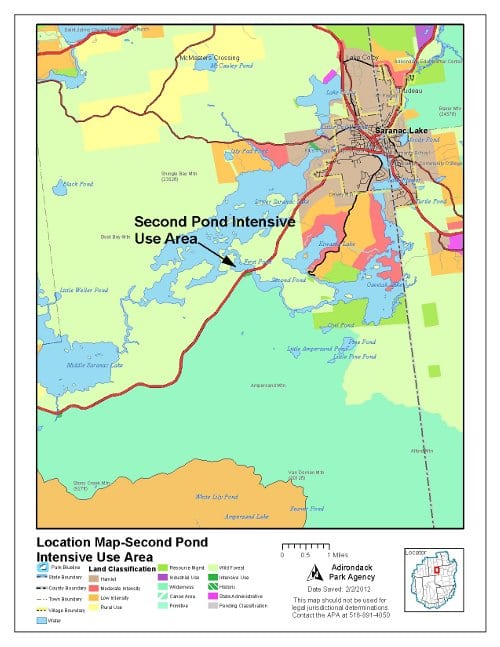 It also wants to change the boundaries of the boat launch, part of which now lies within the High Peak Wilderness, a violation of the Adirondack Park State Land Master Plan. To comply with regulations, DEC proposes to reclassify 5.6 acres of Wilderness as Intensive Use. In exchange, 6.8 acres of Intensive Use would be reclassified as Wilderness.

DEC will hold hearings on the proposal on Tuesday, July 17, at 7 p.m. at Harrietstown Town Hall in Saranac Lake and on Wednesday, July 18, at 1 p.m. at DEC headquarters in Albany.

Neil Woodworth, executive director of the Adirondack Mountain Club, faulted the plan for failing to include a boat-washing station where people could use a high-pressure nozzle to rid their craft of invasive species. “If people understand that you’re doing it to protect the lakes they live, they will cooperate,” he said.

In fact, a number of invasive species already exist in Second Pond, including Eurasian watermilfoil and curly-leaf pondweed. “To be reconstructing a boat-launch facility in the Adirondacks without including a boat-washing station is crazy,” he said.

DEC does plan to post information about invasive species at the launch and allow water stewards from Paul Smith’s College to educate the users of the facility.

In the launch’s draft management plan, DEC said it may consider a boat-washing station “in the future should resources become available.”

More details on DEC’s plans can be found in the draft environmental impact statement. Click the link below to read a PDF of the document.