Each year the American Alpine Club publishes a little book titled Accidents in North American Climbing, on the theory that reading about accidents is one way to avoid them. Usually, most of the reports are from out west or Alaska. Occasionally, an accident in the Adirondacks makes the book.

This year, however, a full three pages are devoted to our region, with four mishaps described in detail. All occurred in 2016 (the year covered by the book). I will summarize them below, using the headlines from the book. 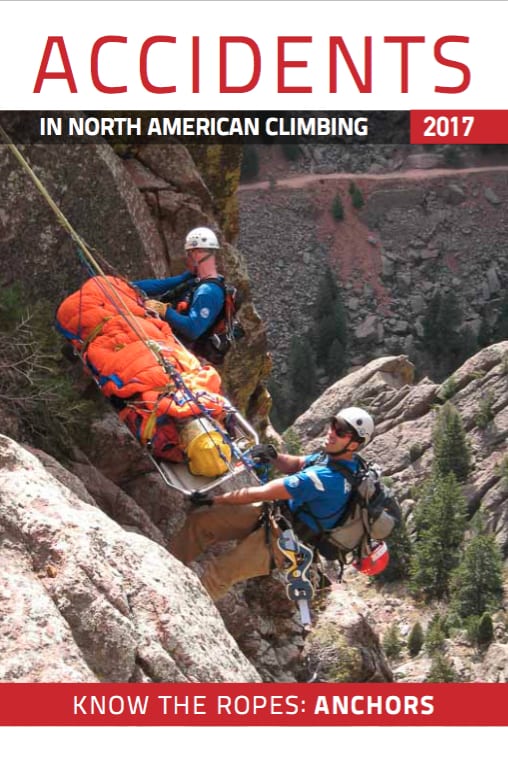 We wrote about this accident last year for the Adirondack Explorer and Adirondack Almanack. On January 26, an ice climber from Connecticut fell from a route called Screw and Climaxe on the north side of Pitchoff Mountain. His partners estimated that he plummeted 130 feet; fortunately, he had clipped the rope to an old sling, preventing him from hitting the ground (he stopped about five feet short). As it was, he struck a ledge on the way down. He fractured his leg and knee cap and cracked his sternum and skull.

In Accidents, the victim gives his own account of what went wrong. He could see that the ice was thin at the bottom of the route, but he couldn’t assess conditions higher up, due to snow. He did see thick ice at the top of the route.

“When the ice revealed itself to be in poor shape partway up, I should have retreated,” he writes. “I can’t say precisely why I continued, except that I was motivated to finish so my partners could have a good day of climbing. Better communication with my partners would have helped. As it turns out, they had also been thinking that a retreat would have been the best option, given the conditions. If one of us had verbalized this suggestion, we probably all would have agreed to turn around.”

Forest rangers and volunteers spent hours rescuing the climber. He underwent surgery to repair his leg and has made a good recovery. He says he now avoids routes he cannot assess from the bottom.

Fall on Ice: Using Microspikes Instead of Crampons

In March, 35-year-old Shaun So was leading a party of nine up Haystack Mountain. When they reached Little Haystack, they realized they would have to descend icy rock to reach their destination. Three of the hikers turned back. Six pressed on, including the leader’s brother, who was wearing Kahtoola Microspikes instead of crampons. When his brother fell, the leader threw himself on top of him and tried to arrest their slide with an ice ax, to no avail.

“My brother was able to grab a rock to stop himself,” So writes. “Having lost my grip on my ice axe, I continued sliding until I forcefully planted by right crampon onto a rock outcropping. I stopped just a few feet short of a cliff.”

So broke his fibula in two places. He spent two hours crawling back up Little Haystack. Eventually, he was airlifted from the mountain by helicopter and flown to the Adirondack Medical Center in Saranac Lake.

He writes: “My brother’s fall started the chain of events that ended with my injuries, and it probably could have been avoided if he had been wearing crampons instead of Microspikes. I didn’t know he was improperly equipped until we ditched our snowshoes [on Little Haystack]. As trip leader, I should have done a gear check the night before, and I should have turned him around when it became apparent that Microspikes were inadequate for the conditions.

“Furthermore, this was the first time some climbers in our party had ever held an ice axe, including my brother. I did not train anyone before the outing to self-arrest.”

On November 20, Annie Nelson was leading a crack climb Starbuck Cliff near Lake George. When she was about 60 feet up, she grabbed a rock that came loose.

“Without thinking, I chucked it down in the direction of my belayer, yelling ‘Rock!’ My belayer, who was wearing a helmet, took a step backward and raised his hands in the air,” Nelson writes. “The step back tugged at the rope against my harness. His instinct took over, and he let go of the rope to take another step back. I was trying to recover my balance, but the tug didn’t help. I fell about 60 feet and hit the ground.”

Nelson landed on her back in soft dirt between two boulders. She was knocked out, but when she awoke she was able to drive herself to the hospital. Luckily, she suffered only slightly cracked ribs and a small head injury. “My helmet may have saved my life,” she says.

She did not know her belayer, but he had represented himself as an experienced climber.

The Accidents report is condensed from an account that appeared in the “Unbelayvalbe” section of Climbing magazine. It offers four pieces of advice:

Climbers place camming devices in cracks to protect against fall. The rope is clipped to the cam. If the cams are placed incorrectly, however, they can pull out during a fall. This is especially a concern with small cams.

In this incident, Alan Jenn was leading a popular crack climb known as Rockaholic at the Beer Walls. Partway up, he placed a small cam (0.2 Black Diamond X4).

“There was a better place in the crack for the cam, but I didn’t want to block a good handhold,” he writes. “By this time I was about 40 feet off the ground and getting pumped out, so I quickly placed a 0.4 Black Diamond X4 [another smallish cam] and leaned back to rest on the rope. But the cam shifted as I weighted it, and I watched it slide out. As I fell, the 0.2 cam also pulled out, and I hit the ground on my left side.”

Fortunately, he suffered only cuts and scrapes on his bicep, strained and torn groin muscles, and general bruising.

If he had a do-over, Jenn says he would make sure the 0.2 cam is solid and he would not weight the 0.4 cam without testing it first. “Finally, when I started feeling uncomfortable I could have retreated, but I felt I had to push on. I should have lowered before I got pumped out.”

The editors of Accidents in North American Climbing note that there were other mishaps in the Adirondacks last year. In one instance, two climbers became stranded on Poke-O Slab after attempting to rappel a route known as Catharsis.