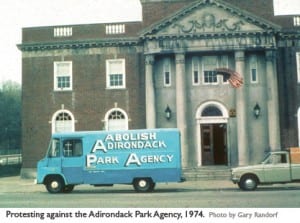 The question of how much environmental protection is enough has always been a contentious one in the Adirondacks. So has the related question: Do strong environmental protections damage our economy? Most elected officials who represent us locally and in the state legislature think the Adirondacks already has too much protection, and they claim that our economy has been crippled as a result.

These complaints no doubt hark back to the nineteenth century when the first game laws were enacted, and when the Forest Preserve was established to protect the state’s most important watershed. The complaints escalated into outrage in 1971, when Governor Nelson Rockefeller and the state legislature created an Adirondack Park Agency to regulate land use and development. “Who do these outsiders think they are, telling us what we can and can’t do with our land?” became a rallying cry.

This sentiment is still heard throughout the region, most recently from Assemblywoman Teresa Sayward, who says the Adirondack “experiment” has failed for lack of balance between preserving wilderness and sustaining communities. “My family, friends and neighbors are being forced out of existence and few seem to care,” she wrote. (See Letters, Jan./Feb. 2010.) Recently the Post Star newspaper of Glens Falls, which shares the views of state Senator Betty Little (whose district covers most of the Park), told its readers that “it’s clear the mission to protect the environment has been accomplished, but in the process it’s helped drive many of the people out.”

It is seldom acknowledged that the state has a vital interest in preserving the natural character of the entire Park. That’s because the state (that’s us) owns nearly half the land inside the Blue Line. What happens to the private lands, which are interspersed throughout like pieces in a giant jigsaw puzzle, can affect our adjoining Forest Preserve and diminish the Park as a whole.

Nor is it generally recognized that, without the state-imposed game laws, our fish and wildlife would be vastly depleted; without the state Forest Preserve we’d have virtually no old-growth forests and intact ecosystems; and without an Adirondack Park Agency, much more of the Park’s private land would be chopped up and covered with second homes.

Have these protections hurt our economy? Despite the tired old rhetoric, there’s little evidence to support that claim, and considerable evidence to the contrary. Most of the Adirondack Park is far from prosperous, but let’s face it—the region is better off economically than most other northern rural areas from Maine to Montana. And it’s pretty clear why. The state has done a creditable job of preserving what most distinguishes the Adirondacks—the woods, waters, wildlife, and scenic beauty. As a consequence, we have a going tourist industry.

Of course, much can still be done to capitalize on wilderness recreation and the kind of “green tourism” that produces more jobs and greater economic stability. By preserving what makes the Adirondacks most appealing, we can also attract more telecommuters who are able to conduct most of their business online. For those who love the undefiled outdoors and can make a decent living this way, the opportunity to become full-time Adirondack residents may be their dream come true.

Since the Adirondack Park Agency was created in 1971, an average of eight thousand new houses have been built every year in the Park. That’s an increase of about 50 percent in less than forty years—and there’s every reason to believe that trend will continue after the current recession. If anything, the Adirondack Park Agency needs to be strengthened, not weakened, so it has better, broader control over developers who would otherwise cram our lakeshores with more houses and septic systems, and desecrate our ridges and hillsides with more McMansions.

If we’re smart about it and protect (rather than degrade) our greatest economic asset, we can have our cake and eat it too.