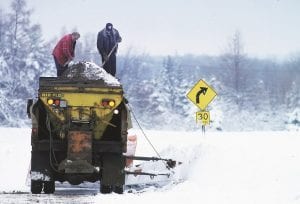 Awarded through the Capital District Regional Economic Development Council, the salt reduction grant will provide $200,000 to expand application of salt brine that uses far less salt than traditional rock salt. As stated in the award description, “This project will lessen the stress on the local environment including wetlands, local streams and Lake George.”

The second award for $600,000 will be applied to strengthen milfoil eradication efforts in Lake George while also bolstering funding for the Aquatic Invasive Species Prevention Program administered by the State’s Lake George Park Commission.

New York State faces a double-barreled threat from road salt and invasive species that is arguably greater than anywhere in the nation. New York is both the main point of entry and spread for invasive species across the entire United States while also possessing the single largest snow and ice management industry in North America.

“By applying leadership through partnership, we are setting an example for others to follow, crucial to which is S.A.V.E.’s continued co-investment with the State in solving these two serious problems,” said founding S.A.V.E. member and Executive Director of The FUND for Lake George, Eric Siy.

“I could not be more proud of the fact that Lake George has established the strongest aquatic invasive species prevention program east of the Mississippi and is now on track to making Lake George a national model for reducing the use of toxic road salt,” added Mayor Blais. “On behalf of the S.A.V.E. Partnership and all those who care so much about our great Lake, I also could not be more grateful to Governor Cuomo for his leadership in protecting Lake George from these mounting threats.”

S.A.V.E.’s work over the past three years to reduce the use of road salt has culminated in the goal of cutting salt use in half in the next three years, by the year 2020. Doing so would result in dramatic improvements of Lake and watershed ecology for the next generation. It would also help ensure that Lake George as a public drinking water supply would be protected along with groundwater that serves as the source of drinking water from wells for many residents. A highlight of S.A.V.E.’s role on salt reduction has been a series of annual Salt Summits, the 3rd of which was held in October in Ticonderoga. Record attendance at the latest summit included public and private leaders from across the region and around the state to engage on Best Practices for reducing road salt use. A large contingent of State officials attended this event.

Raising the alarm on road salt at Lake George was The State of the Lake report (published by The FUND for Lake George and RPI in 2014) that revealed a tripling of salt levels in the Lake over several decades. The cause was (and remains) clear; an estimated 15,000 metric tons of road salt are applied on area roads every winter—an amount that does not include salt used on private roads, parking lots, driveways, and sidewalks. Based on studies from other places, salt use in the private sector can account for half the problem which would double the volume used at Lake George to 30,000 metric tons—enough salt to fill 300 rail cars or a train more than three miles long, every year.

ABOUT THE S.A.V.E. LAKE GEORGE PARTNERSHIP

Standing for Stop Aquatic inVasives from Entering Lake George, S.A.V.E. was founded in 2014 to advocate for and ultimately provide matching support with New York State that catalyzed creation of the Aquatic Invasive Species Prevention Program. The program requires inspection and decontamination of all trailered watercraft launching in Lake George, S.A.V.E. members continue to provide matching funds (about $300,000 per year) for the program whose success provided the impetus for establishing the Adirondack-wide prevention program in 2015 with State funding. Recognizing the threat posed by road salt, S.A.V.E. expanded its role (and the meaning of its name—Salt Abatement is Vital to the Ecology of Lake George) to lead the way on salt reduction. This work started in 2015 an ongoing, state-of-the-art assessment of road salt application rates basin-wide, crucial to guiding salt reductions that keep roads safe while protecting the Lake and watershed.