The Open Space Institute has purchased 890 acres along the southern edge of the Adirondack Park, which OSI said will permanently protect the forested parcel.

The Smith Farm in northern Saratoga County contains more than two miles of Hudson River frontage and will be open for public recreation, according to OSI.

It abuts Moreau Lake State Park. The institute said the state is expected to add the parcel to the park using New York’s Environmental Protection Fund. 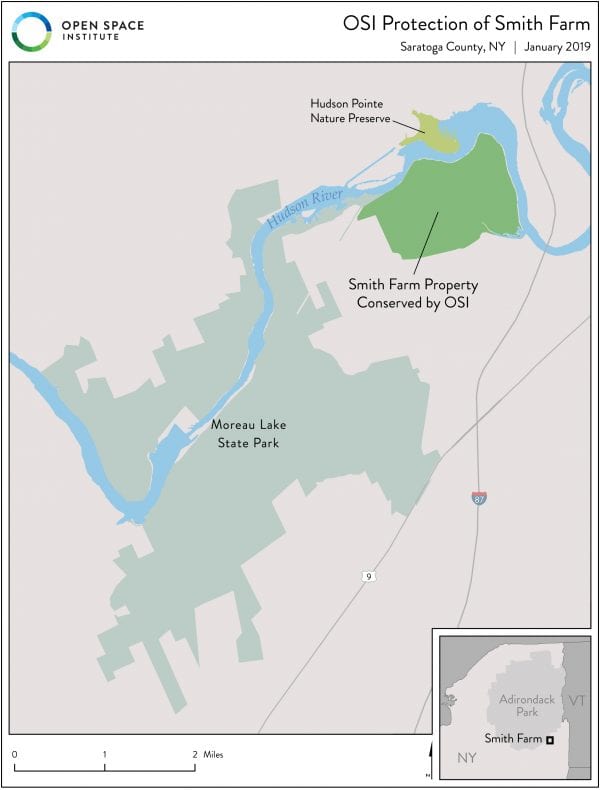 The land was purchased for $1.4 million from Finch Pruyn Timberlands, OSI said. It also contains wetlands and lies directly across the river  from Hudson Pointe Preserve, land OSI also protected, in Warren County.

The Town of Moreau has plans to develop the Hudson River Trail, a scenic pathway running along the river for runners, walkers and bike riders. OSI said it can now connect Moreau Lake State Park to downtown Glens Falls.

Todd Kusnierz, Moreau Town Supervisor, said the trails that will be established will create a key connection to a larger system of trails for horseback riders, which should economically benefit the town and surrounding communities in spring, summer and fall.

The farm acquisition was a priority of the recently developed Palmertown Range Master Plan by OSI and local partners for conservation and recreation for the Adirondack foothills from Fort Ticonderoga in the north to Saratoga Springs in the south.

The plan identifies parcels for establishing a 13-mile recreation corridor to link Moreau Lake and Saratoga Spa State Park, intended to protect a continuous swath of land between the Green and Adirondack mountains, providing wildlife with a corridor for habitat and movement.