Birdsongs welcome hikers on a jaunt in Keene Valley in May.

Following a disappointing winter for skiing, I came into May looking forward to the next season of outdoor enjoyment. But spring turned out as contrary as winter, with the first days of warming sun followed by spells of bone-chilling cold.

So on the mid-May morning when Larry Master and I meet to hike Snow Mountain in Keene Valley it’s a relief to hit the trail with sun shining and the temperature near fifty degrees. The area woke yesterday to a coating of snow on the ground and buffeting winds. Today, though, holds the promise of a vernal forest stirring to life with budding wildflowers and the sound of birds returned to the Adirondacks.

Snow Mountain rises in the lap of the High Peaks but short of the four-thousand-foot-plus summits that surround it. It’s a half-day, 3.4-mile round-trip hike that pays off with views of some of the most spectacular peaks and rock slides in the Park. And unless water is running high you can scramble up a trail alongside beautiful Deer Brook. And a short side trip leads to a long cascade where the brook slides and tumbles out of the forest and to your feet.

This morning the highway adjacent to the trailhead is a noisy construction zone as workers rebuild a bridge over the East Branch of the Ausable River, one of a number of bridges the state is replacing on Route 73. As we begin our walk, though, we soon enter a narrow ravine and the melodies of falling water replace the commotion of heavy equipment.

The year’s modest snow pack probably works in our favor here as the water is not the spring torrent that could have made this route unwise. The trail switches from one bank of the brook to the other as it climbs. High water would make the crossings difficult and dangerous if not impossible. In those conditions, hikers can walk up Deer Brook Road to the south of the ravine and join the trail higher up.

Today’s flow is just high enough to make things tricky. Larry has his feet slip out from under him a couple of times while rock-hopping across the brook, once when he perches on a sloping rock next to the bank and again when he trusts a fallen log that turns out to be treacherously slippery.

“Are you OK?’ I ask a bit nervously. He is, after all, a member of the Explorer’s board of directors, who employ me. It’s bad form to break a board member. I’m getting ready to pin the blame on editor Phil Brown for suggesting this route when Larry reassures me, “Fine. The only thing injured is my pride.”

My crossing technique is to walk right through the water where the streambed seems stable and put up with damp boots in return for more solid footing.

The hike continues a half mile up the ravine through a beautiful world of rapids and pools, rock walls and sunlight that filters down from above, illuminating the soft green of new foliage. Along the trail we see red trilliums in bloom and encounter a patch of wildflowers that look like Lilies of the Valley just beginning to bud. But the leaf shape doesn’t seem quite right. After checking a field guide back at the office I surmise they were Canada mayflowers.

At 0.5 miles the trail turns left and climbs out of the ravine. Somehow we miss this development and find ourselves off the trail and peering around for markers. Our solution is to make an easy bushwhack up the slope to rejoin the trail. From there it’s an easy third-of-a-mile walk over level terrain to a bridge over the brook. A sign points to the side trail leading 250 feet to the base of the cascade where we linger for some pictures. This is not a vertical falls but a steeply sloping sluice. Water slides at least eighty feet from the forest above over smooth bedrock. The rocks, tree trunks, and branches scattered around the base are evidence of the power of the brook when snowmelt or sudden storms transform this peaceful scene into one of violent torrents.

After crossing the bridge the trail climbs away from the brook through a mixed deciduous and conifer forest. As the sound of the stream recedes we become more aware of bird song amongst the trees. We’re entering a portion of the trip I have been looking forward to. I am a rank beginner when it comes to identifying birds, but Larry is an expert, and I hope to learn a thing or two.

He immediately gives me a good demonstration of how important bird calls are to identifying species. Birds can be elusive to the intruding eye, but their calls are distinctive, and an experienced birder can confidently ID many species without ever seeing them. With the help of a special listening device that helps his ear separate a bird call from background noise, Larry is soon naming the singers who are hidden in the woods around us. First there’s a black-throated green warbler above us to the right, then a black-throated blue warbler to the left.

“It’s not often you hear the two together,” he says. 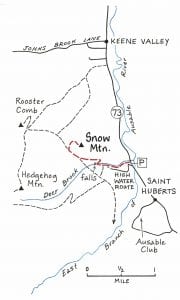 Directions: From the bridge over Johns Brook on NY 73 (near the Mountaineer) drive south for 2.1 miles to the bridge over Deer Brook. Park along the road on the south side of the bridge. If coming from the south, Deer Brook is reached 6.5 miles from the intersection of NY 73 and US 9.

“All warblers are just summer residents,” Larry says. “They’ve recently arrived. It’s a little surprising they’re on their territories already.” This means they’re acting territorial and will check us out.

Larry uses his phone to record the calls, then plays them back to see if he can draw the birds closer. With a flitting in the branches above us, a black-and-white warbler comes to investigate what’s going on in its territory. It’s just a small silhouette to me, but Larry knows what he’s seeing. The ovenbird circles through the branches above.

Larry says it’s not surprising to encounter all this activity once we leave the brook behind. The birds depend on being able to hear sounds, whether the song of a potential mate, the warning calls of other birds, or the noise of a predator. So they aren’t as happy near streams where falling water can drown out sounds that are more important to them.

After this interlude we resume our ascent. The grade is easy to a junction at 1.2 miles. The trail branching off to the left leads to the Ausable Club at St. Huberts. Still hiking on an easy grade, we reach a final junction at 1.4 miles. The trail straight leads to Rooster Comb, but we turn right on the spur trail to Snow. We can see the summit from here, and it looks like a mellow rounded hill. But the trail begins to rise more steeply, and in the final few hundred yards we climb up a series of ledges and slab that’s the steepest stretch of the day.

The summit is not open, but there’s a fine overlook with views of Giant Mountain with its spread of rock slides, Round and Noonmark mountains, and Dix, streaked with dramatic rock slides. Beneath us, seemingly at our feet, are the golf course and sprawling main building of the Ausable Club. Route 73 threads through the valley between Giant and Round mountains.

As Larry takes pictures I spot a large bird soaring in a spiral above the highway. When I point it out, Larry guesses it’s a red-tail hawk. When he gets his binoculars on it, though, it proves to be an immature bald eagle. As we watch, the eagle soars higher and higher in its spiral until it is well above the summit of Round Mountain surveying its empire on a fine spring day.