The Wright Peak Ski Trail is one of the top backcountry-skiing trails in the Adirondacks, but skiers often complain that it dumps them out onto a narrow and often-rocky hiking trail that leads to Algonquin Peak.

The state Department of Environmental Conservation proposes to fix the problem by rerouting the bottom of the ski trail so that it terminates at the Whales Tail Ski Trail.

It is one of several skiing proposals in a draft amendment to the High Peaks Wilderness unit management plan (UMP).

Ron Konowitz, founder of the Adirondack Powder Ski Association, said he was ecstatic over the Wright Peak proposal. He hopes the trail will be “once again what it was back in the 1930s.”

Constructed in 1938, the Wright Peak Ski Trail was designed by Otto Schniebs before the advent of lift-operated ski resorts. Schniebs, who coached at Dartmouth College in the 1930s, is credited with co-authoring the first instructional book on skiing. He was inducted into the U.S. National Ski Hall of Fame.

Originally, the ski trail and hiking trail were separate. In the 1970s, DEC closed the old hiking trail, which was eroded, and moved hikers onto the lower part of the ski trail. Since then, this stretch of trail has been maintained for hiking, with rock steps and water bars. The sides have been brushed in to narrow the passage. In contrast, the original trail was fifteen feet wide in places.

Wes Lampman, chief operating officer of the Adirondack Mountain Club, said the hiking trail can be hard to ski, especially when there is not enough snow to cover the rocks. “It’s pretty difficult to get out there early season when you have boulders that are sticking out two to three feet,” said Lampman, who once headed the club’s trail crew.

The new trail would be wider than the typical hiking trail and thus safer for skiing. Separating the ski and hiking trails also would eliminate the risk of collisions between skiers and snowshoers.

The route has not been surveyed, but Lampson noted that the area contains a lot of open woods, minimizing the number of trees that would need to be cut.

The Barkeater Trails Alliance, which maintains ski trails in the Lake Placid region, also supports the Wright Peak proposal. Josh Wilson, the group’s executive director, said DEC may discourage skiers from hiking over Wright Peak to reach the ski trail. The fear is that skiers will damage alpine plants.

“There’s concerns about encouraging more traffic on the summit because of the vegetation, and it’s kind of a steep drop off the summit on the ski trail,” Wilson said. “So I think everybody agrees that coming up from the bottom is the best long-term solution.”

The Whales Tail Ski Trail extends from Marcy Dam to the lower Algonquin hiking trail. Konowitz argues for closing the Marcy Dam end of the trail to keep hikers from going through Whales Tail Pass—eroding the trail in summer and post-holing in winter.

The Wright Peak proposal is contingent upon the Adirondack Park Agency adopting guidelines for the construction and maintenance of backcountry-ski trails. Konowitz would like to see the guidelines—in the works for several years—approved this fall.

Skiers are allowed on any hiking trail, but DEC is proposing to designate seventy-nine miles of trails in the High Peaks as dual use and improve them for skiing. One improvement would be skier-friendly bridges over streams.

The draft amendment lists nineteen trails (besides Wright Peak) that would be improved for skiing. They include the Calamity Brook Trail, Indian Pass Trail, Preston Ponds Trail, Lake Andrew Trail, Boreas Ponds Trail, Elk Lake-Marcy Trail, and the Round Pond Trail to the base of the Dix Mountain slides.

Until the APA adopts the trail guidance, however, it remains unclear how these trails will be modified. “They are obviously trying to get this done quickly and include some of these ski trails, which is awesome, but it would be so much better if we had the ski-trail guidance already.” Wilson said.

The APA also must decide whether the High Peaks amendment complies with the State Land Master Plan. 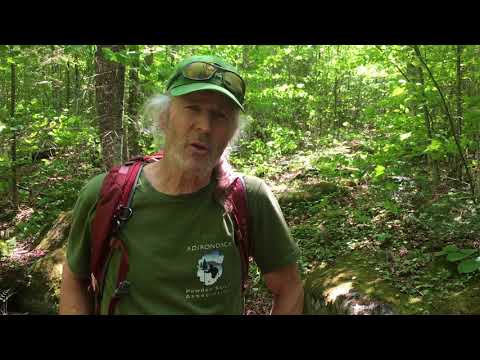