Crews began removing the structurally unsound Rome Dam on the West Branch of the Ausable River this week.

Kelley Tucker, executive director of the Ausable River Association, said the study found that consequences of not replacing the dam were serious.

“There was the potential for loss of life,” Tucker said.

The Rome Dam was 38 feet tall and 103 feet across and made of concrete. 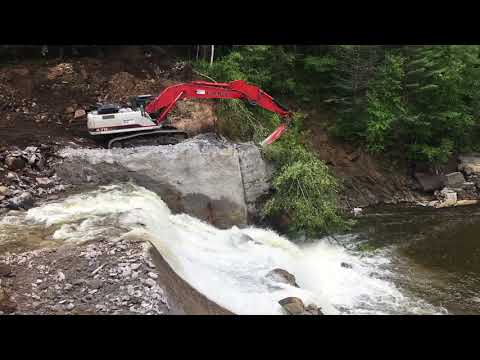 The dam was originally built in the early 1890s and then rebuilt in the 1930s. It provided water and mechanical power for the J&J Rogers Company pulp mill. It had not been maintained since 1971 when the Rogers Company ceased operation.

The dam assessment was a result of the town of Jay’s New York Rising Community Reconstruction Plan, which was undertaken in the years after Tropical Storm Irene. That storm took place in August 2011 and caused serious flooding, devastating communities located nearby.

Milone and MacBroom, the firm that did the engineering study, estimated the cost of the dam removal to be $2.5 to $3 million. Work is expected to be completed by Nov. 15.

“We really wanted to do the work this year. We didn’t want to risk going through another winter,” Tucker said.

The cost of the Rome Dam project will be paid by federal funds awarded to the Town of Jay by the Governor’s Office of Storm Recovery, part of the Community Rising process designed to ensure greater flood resiliency after Tropical Storm Irene.

Rome Dam is one of three dam projects taking place on the West Branch of the Ausable River this summer and fall.

Trout Unlimited, Lake Champlain Basin Program, and U.S. Fish and Wildlife Service paid for the removal of the dam that dates back to the late 19th century.

“It’s not a huge dam as you can tell by the picture, but it was enough to impound water and thus heat up water that was in back of it,” said Bill Wellman, of Trout Unlimited.

The third dam getting work done is the Wilmington Dam, which is having its gate replaced. Tucker said the gate was undersized and is being replaced with a larger one to allow them to better manage their sediment flow. That work is expected to continue into the fall.

A photo gallery of the Rome Dam prior to removal