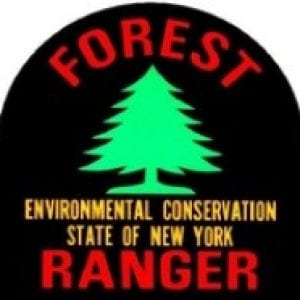 From the Department of Environmental Conservation

City of Albany
Albany County
Prescribed Fire:
On June 12, Forest Rangers Joe Bink and David Nally, along with Albany Pine Bush staff and volunteers from The Nature Conservancy, U.S. National Park Service, and U.S Fish and Wildlife Service, conducted a prescribed burn at the Albany Pine Bush Preserve. The objective of the 8.2-acre burn was to increase habitat for the Karner Blue Butterfly and wild blue lupine.

City of Albany
Albany County
Police Officer Training: From June 11 to 13, Forest Rangers Ian Kerr, Joe LaPierre, and Chad Richardson attended VALOR Program’s Survive and Thrive law enforcement officer training at the New York State Police Academy in Albany. This course is sponsored by the U.S. Department of Justice’s Bureau of Justice Assistance and provides officers with information and techniques to enhance workplace safety. The third day of the course is a train-the-trainer session so Rangers can share what they’ve learned with their peers. Topics covered in this intensive training are causes of officer assaults, personal safety and preparedness, physical health, officer-citizen encounters, weapon concealment, casualty care, rescue tactics, and vehicle safety. Professionalism, leadership, and critical decision-making are common topics. MBTA Transit Police Officer Richard Donohue delivered the keynote speech and spoke about how he survived near-fatal gunshot wounds in the aftermath of the Boston Bombing while attempting to apprehend one of the bombers.

Town of North Hudson
Essex County
Rescue training: On June 13 and 14, Forest Rangers from Region 5 participated in a two-day technical rescue refresher training event at a popular local crag. Forest Rangers have a progressive training program that stays current with the latest technology and the dynamic recreation trends of the public, like rock and mountain climbing.

Village of Tupper Lake
Franklin County
Wilderness Rescue: On June 15 at 1:24 a.m., Central Dispatch received a call from Tupper Lake Police requesting assistance in locating a 62-year-old male last seen at his residence on June 12. The man is an avid nature walker and known to walk the Deer Pond Trail. New York State Police located his vehicle at the Deer Pond Trailhead and requested assistance. Forest Rangers arrived at 2:15 a.m. and searched the areas around Deer Pond throughout the night with negative results. At 6:51 a.m., the man was located a half-mile east of Deer Pond, dehydrated and malnourished. Forest Rangers escorted the subject to a location where he was then transported by 4×4 to the trailhead. He was turned over to Tupper Lake Rescue Squad for treatment, and the incident concluded by 1:25 p.m.

Town of Hunter
Greene County
Wilderness Rescue: On June 15 at approximately 2:30 p.m., an 11-year-old boy from Westfield, N.J., sustained a laceration to his lower leg while swimming in the middle pool of Kaaterskill Falls. The boy was with his father at the time of the injury. Assistant Forest Ranger Aaron France was at the middle pool when the injury occurred and rendered first aid to the swimmer. Assistant Forest Ranger France then assisted the boy and his father in getting to the Laurel House trailhead. They met Forest Ranger Robert Dawson along the way, who provided a courtesy transport to their vehicle at the Catskill Mountain House. The incident concluded at 3:56 p.m.

Town of Newcomb
Essex County
Wilderness Rescue: On June 15 at 10:30 p.m., DEC’s Ray Brook Dispatch was notified of two hikers separated from their group and overdue returning to the trailhead from the summit of Santanoni in the Western High Peaks Wilderness area. The missing New York City hikers were last seen on the Santanoni summit at 5:30 p.m. Two members of the party had returned to their vehicle at the Upper Works trailhead at 8:15 p.m. and waited two hours for their return before traveling approximately 30 minutes to reach cell service to report the others were overdue. One person received a text message advising that the missing 38-year-old male and 41-year-old female hikers had gotten lost and returned to the summit. Forest Ranger Charles Kabrehl met the reporting party at 12:18 a.m., along with New York State Police, to assist at the trailhead to monitor if the missing hikers came out. Lt. Brian Dubay responded to cover the Bradley Pond loop while Forest Ranger Kabrehl went to the Santanoni summit, reaching the summit at 4:12 a.m., with negative results. Forest Ranger Evan Donegan arrived at the trailhead at 4:30 a.m., to establish communications with parties in the field. The hikers were located at 7:44 a.m., by Forest Ranger Donegan in good health approximately 1.5 miles from the trailhead. The pair were walked back to the trailhead and transported to Marcy Field to meet the rest of their party by 9:36 a.m.

Town of Caroga
Fulton County
Wilderness Rescue: On June 16 at 11:45 a.m., DEC’s Ray Brook Dispatch was advised by the Fulton County Sheriff’s Office of a rescue on Kane Mountain. Caroga Lake Fire Department and EMS personnel responded to a report of a 19-year-old female hiker from Gloversville with an unstable leg injury after the subject slipped on the trail. Four Forest Rangers responded to the call and assisted with the rescue, splinting the injured hiker’s leg and transporting her by UTV to a waiting ambulance.

City of Ithaca
Tompkins County
Wilderness Rescue: On June 16 at 7:18 p.m., Central Dispatch received a call from Thompkins County 911 requesting assistance for a lost female hiker in the Buttermilk Falls State Park. The hiker called 911 claiming she was stuck in the mud along a creek. Thompkins County 911 was able to get the coordinates of the hiker’s location before her cell phone died. Attempts to locate the hiker at that location proved unsuccessful. At 12:40 a.m., Forest Ranger Anne Staples reported that the hiker had been located by State Police walking along Route 13. The subject was wet but in good health.

Be sure to properly prepare and plan before entering the backcountry. Visit DEC’s Hiking Safety and Adirondack Backcountry Information webpage for more information.