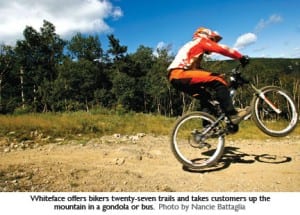 In winter, this place would be crawling with skiers. But on a weekday morning in August, I’m nearly alone, or so it seems.

I’ve come to Whiteface Mountain to ride my bike down slopes that I have skied for years. Although I can see few other riders, the bike park’s operator, “Downhill” Mike Scheur, has plenty of things to keep him busy.

Next weekend is the annual 5K Downhill, part of the Gravity East tour competition. Scheur and his helpers have to string six miles of yellow caution tape along the course. It’s a winding, precipitous, hang-on-for-dear-life route that runs from the top of Little Whiteface to the base lodge—a drop of 2,400 vertical feet.

“I want to impress them,” Mike tells me. “We have to show them we can put on a world-class event.”

“World-class” is an adjective that many ski areas toss around, but Whiteface has earned the honorific more than most. The mountain was home to the 1980 Olympics and continues to host regional, national, and international ski competitions. With 3,430 vertical feet, it boasts the longest drop of any eastern ski resort, and its summit offers skiers a great view of Lake Placid and a sea of Adirondack peaks.

But until recently, mountain bikers had been less impressed with Whiteface.
“They’d just sell a pass and tell you it might be dangerous,” says Mike Campbell of Wilmington, a longtime rider.

Whiteface officials were ready to abandon mountain biking altogether until High Peaks Cyclery, a Lake Placid bike shop, entered a partnership with Downhill Mike, who was then a racing promoter in Las Vegas. Together, they have retooled the mountain for downhillers. Whiteface doesn’t subsidize the operation, but it does provide services such as trail work, gondola rides, and medical assistance. 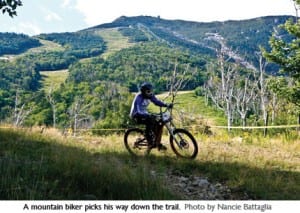 Photos on Whiteface’s summer website and in the base lodge show riders careening off giant boulders, rocketing down gnarly, rocky trails, and playing on giant wooden features such as a double-decker teeter-totter.

It’s all great fun for those who own enough body armor to outfit a football team (including a helmet with face protection) and can afford to buy a forty-five-pound downhill bicycle with heavy-duty shocks (expect to spend at least a few grand).

But what about guys like me—riders who enjoy a few downhill challenges but feel more comfortable on cross-country terrain? My bike weighs only thirty pounds and cost far less than two grand. The only protective gear I own is a lightweight helmet, fingerless gloves, and a few Band-Aids in my Camelback.
Does Whiteface have trails I can ride without breaking my neck?

Mike is frank when I put the question to him. The biggest terrain—that is, the 2,400 feet of vertical accessible via the gondola—was not for a person of my skill level.

“You have to be able to go down steep trails without using your brakes,” he says. “You have to sit all the way back on your bike. And there might be loose rocks. You have to suddenly apply the brakes, hit a hairpin turn, and do it again.”

Fortunately, Whiteface does have trails for mere mortals. The park runs an old bus that chugs up dirt roads and drops off riders a few hundred vertical feet below the mid-station lodge. From here, bikers can access a dozen trails of varying difficulty.

I get into the bus with several other riders. Mike himself is at the wheel—the regular driver is late for work—and he suggests trails based on our interests and abilities. Most of the routes run through the woods, not along ski trails, and even the easiest ones include fun features such as sharp turns and wooden ramps. It’s clear from the design of the trails that Scheur and his crew have a passion for downhill riding.

Scheur, who is forty-seven, is a Buffalo native who first moved to Lake Placid fourteen years ago. In 1998, he started mountain biking and soon became interested in downhill riding. The sport is the mountain-bike equivalent of downhill skiing: fastest to the bottom wins. Eventually, he started promoting downhill events in Nevada, but he was lured back to Placid by Brian Delaney, the owner of High Peaks Cyclery.

“I saw how good Whiteface was and was amazed no one was going there,” Scheur says.

He lets us off the bus next to a “pump track,” a horizontal course of banked turns and small bumps. A skilled cyclist can ride a pump track continuously without pedaling. The rider “pumps” the bike by shifting his weight and letting his momentum carry him from hill to curve. Alas, I can’t even finish one circuit without pedaling.

Watching me are Kevin Mastropietro and Shaun Kroon, both from New Jersey. The two young men, on vacation with their families, are decked out in downhill regalia and definitely ready to shred.

“We grew up as cross-country riders,” Mastropietro says. “But downhill is so much fun. It’s all the fun stuff of mountain biking, without the climbing.”

After floundering on the pump track for a few more minutes, I head to a trail called Seek and Destroy (probably after the Metallica song). The hardest part is finding it. The bike trails lack signs, and Whiteface’s map doesn’t show the relation of bike trails to ski trails. Eventually, after climbing a dirt road, I reach the beginning.

The trail offers a fun romp through the woods, highlighted by a four-foot-high wooden ramp covered with roofing shingles, which was built to avoid a large root. In no time at all, I’m back at the base.

After another bus ride, I wander over to Northeast Shore, a trail that proved more difficult. The route is a series of U-shaped curves, which require speed to take the banked turns. But the route also has many exposed roots, mud, and rocks and looks like the perfect place to do an “endo”—a flip over the handlebars due to catching the front wheel.

It’s a twisting, turning trail that runs through the dark forest. I pass on the trail’s signature feature, three perilous-looking teeter-totters that mountain bikers ride over.

I wind up walking the last forty feet, wary of a sharp turn that looks dangerous. Back at the bottom of the mountain, I go into the lodge to talk to Scheur. Why, I ask, doesn’t Whiteface rate its mountain-bike trails like its ski trails, with a green circle, blue square, or black diamond to denote difficulty?

He replies that the mountain-bike world has failed to establish standards for what constitutes easy, intermediate, and difficult. A mismarked trail, he adds, could invite a lawsuit if someone were to get hurt.

I don’t buy it. Riders should know what they’re getting into before they head down a trail. And plenty of other mountain-bike venues, such as Killington Mountain and Kingdom Trails in Vermont, have adopted the black-diamond-style symbols for summer use. I don’t see why Whiteface couldn’t as well.

As I wait for the next shuttle bus, I chat up some riders. Whiteface has lots of tough terrain, they say, but they love it.

“You can’t tear me away,” says Patrick Smiles, a New Jersey resident whose parents own a house in Jay.

Mat Ellis of Long Island agrees: “This is huge.”

What does it take to ride the big trails here? For starters, it seems to help if you’re a male who’s too young to envision himself in traction. You also need the ability to let go and ride a bike faster than your comfort level might allow.
You must rely on your instinct instead of reason, on steering skill instead of stopping power.

And, of course, lots of body armor.

“Some of it’s unnatural,” says Mike Campbell, the Wilmington local, who works as a bike tech at Whiteface. “You have to let go of the brakes. You have to look way down the trail.”

Take Excelsior Extreme, which follows a vehicle access road to the top of Little Whiteface. Just because it’s a road, don’t think it’s an easy trail. “It’s all baseball-size rocks,” Campbell tells me. “You can’t hit your brakes. If you do, you’ll slide sideways and fall over. That’s how I broke my hand.” He holds up a cast.

OK, so maybe Whiteface is not for the casual rider. But it has its gentle pleasures. At the end of the day, the bus driver suggests I check out the Ausable Loop and River Run trails on the edge of the resort. Riding alongside the West Branch of the Ausable River, I come to the top of a beautiful stone gorge a hundred feet high. I have skied Whiteface for more than fifteen years, and I never knew that only a mile or so from the base lodge was a canyon full of churning whitewater.

I enjoy the view for a while before tearing myself away and riding back toward the base lodge. I’m thinking I might have time for one more run on the shuttle bus.