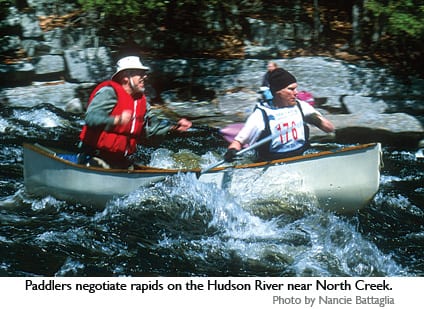 6 whitewater trips to whet your appetite

There is a time for all things, and the creak of winter will soon give way to the creeks of spring. Whitewater paddlers, rejoice!

The Adirondack Park abounds in whitewater. Oddly, many folks think of running whitewater as a sport strictly for the young, hardy, or foolish, involving blue-lip water temperatures and swollen rapids. Even many experienced paddlers will jump on the creeks only in early spring and then move on to other pursuits just as the real fun begins.

It’s true that the runoff from winter snow pack offers paddlers a shot at streams that become trickles as the year wears on. But there are plenty of opportunities to enjoy whitewater in the more comfortable weather of late spring and summer.

In this article, we’ll suggest some fun stuff for the beginning or midlevel paddler, whether in kayak or open boat. Our aim is to whet your appetite. Before venturing onto a river, consult a guidebook for detailed descriptions of these runs.

This three-mile stretch of the Sacandaga is often dismissed as too easy or merely a playground for tubers and kids’ raft trips. Or else boaters run straight down it in an hour, through two long rapids separated by a mile of flatwater, and go home. These approaches don’t do it justice.

Located in the town of Hadley, Stewart’s Dam controls water releases from Great Sacandaga Lake, both to prevent excessive runoff into the Hudson River in the spring and to maintain adequate flow of the Hudson during the summer for communities that draw drinking water from the river. But the dam releases also benefit paddlers. To check on the release schedule, contact the Sacandaga Outdoor Center (518-696-7238).

The center offers a shuttle service to a put-in on the south side of the river. Groups from the Adirondack Mountain Club (ADK) generally use a put-in on the opposite bank, reached by a short trail.

To get the most out of this trip, paddlers should take advantage of the river’s numerous drops, eddies, and play spots and make river crossings in the powerful current. 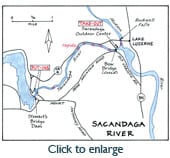 The left side of the river offers accelerating current and a series of pour-overs (shallow rocks with turbulence downstream of them), exposed boulders, and eddies. A center run is initially strong, with hydraulics behind boulders and an opportunity to move to either side of the river for play spots. River right is similar but leads to a powerful ledge drop followed by a long, narrow eddy from which you can make multiple runs at a surf hole and large trailing souse hole (nicknamed Vesuvius). Paddlers spend a ton of time here right through summer and fall. It’s a great spot for surfing, rolls, and gaining confidence.

Below this whitewater stretch is a mile of flatwater, after which the river picks up speed slowly, leading to three- to four-foot standing waves, haystacks, and a boulder complex midriver underneath the historic Bow Bridge as the confluence nears. A mistake here means a long swim.

The takeout is at the Sacandaga Outdoor Center on the left bank just before the confluence. If you want to paddle more, you can go up the Hudson a short distance to the runout from Rockwell Falls. If the Hudson is at summer levels, working up the mini-gorge under the Hadley Bridge offers more surfing and opportunities to practice skills.

The Sacandaga trip is short enough so that two runs are possible in a day.

The East and West Branches of the Sacandaga are generally runnable only in the spring and after gully washers, but they are challenging and loads of fun. The East Branch is short and intense; the West is longer, remote, and very pretty. 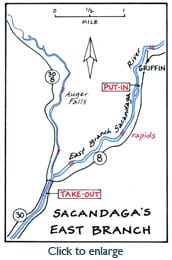 The run on the East Branch can be as short as a mile and a half, as measured upriver along Route 8 from the bridge north of Wells where the highway splits from Route 30. Paddlers from the Schenectady chapter of ADK start at a parking pull-off adjacent to the river on Route 8 (actually, there are several pulloffs to choose from). The river immediately begins a rapid, twisty class 3 descent that is over as quickly as it starts. This section offers great maneuvering exercises, but if you take a swim it is going to be difficult and scary through the boulder fields. With good fortune, run this section a couple times and then head over to the West Branch.

The West Branch run is accessible via the West River Road out of Wells. This dirt road—not always open in early spring—ends near Whitehouse, the site of a former hunting lodge. The put-in is a short distance before the end, where the road comes close to the river. The eight-mile run takes you past high, cedar-lined valley walls and striking rock outcrops. When levels are right, it is fast, with long rapid stretches and short stretches of flatwater. Our standard run ends where the West joins the Main Branch at the state campground off Route 30.

Other Sacandaga options are on the Middle Branch. From Christine Falls to Auger Falls, which offers difficulty levels up to class 5—experts only. The Middle Branch below Wells is a pussycat and a nice class 2 outing.

Middle Branch of the Moose

From a put-in west of Thendara, you can enjoy a run of six miles on the Middle Moose. With moderate water (when the McKeever gauge is at four to five feet), this is a challenging but doable trip for confident boaters.

Although many people put in from Scusa Road, a loop off Route 28, this requires crossing private land, which you shouldn’t do without permission. As an alternative, you can put in a little south of Scusa Road where Route 28 comes close to the river.

Nelson Falls, the first and strongest rapid, comes up about a mile from the put-in, marked by a railroad bridge. Pull out and scout from the left bank. Some carry around the falls. It’s a bit of work, but many do it, and the rest of the run is well worth the effort.

The falls are a series of ledge drops frequently clogged at the top with logs and debris that severely limit entry options. Beware that the falls do not end with a relaxing pool. Instead, expect strong crashing waves, holes, and, often, sweepers. If you get unboated, you may be in for a long, dangerous swim.

Starting down the left side of the river, you accelerate toward a ledge about four feet high that should be run more or less center. That ends with a small pool and a good spot to take a deep breath, empty your boat, and make a run at a rocky slide about six feet high, guarded at left by boulders and right by a rock outcrop.

Reassembled below these drops—or cranked up with adrenaline after a good run—you can look forward to a flatwater respite for a mile or so. After that comes a series of fast, fairly strong descents, ranging from a hundred yards to a quarter-mile, with short intervening flat stretches. The boulder gardens lie in a deeply forested valley through which the Adirondack Scenic Railroad train runs.

A good exit is on the right side of the river at the McKeever Bridge on Route 28. Or you can continue about four miles down flat and class 2 water to the beginning of the Lower Moose.

Hudson: North Creek to the Glen

To me, canoe racing makes about as much sense as a hotdog-eating contest. Why take a beautiful river and blast through it as quickly as you can?

That said, a very nice stretch of the Hudson—about eight miles from North Creek to Riparius—is known for that on the first weekend of May, a tradition decades long. I ran that a few times before getting really involved in the sport, and it can be interesting. Now, however, let me take my time, practice my skills, enjoy the company and the day.

The North Creek-to-Glen section is about fifteen miles. Riparius, lying near the midpoint, makes a nice lunch stop: there’s a converted caboose that sometimes is open for hot coffee or ice cream. Riparius also is an alternative take-out or put-in. The leaf-peeper train crawls along the river during the fall, which can be a nice touch. 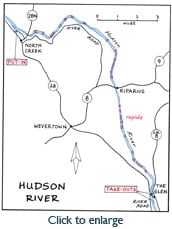 Both sections are class 2 to 3 and can be run—if you have good skills—when the North Creek gauge reads from three and a half to seven feet. Higher water requires caution: swims can be long, and in May the water is still going to be in the fifty-degree range. Probably an ideal water level is from five to about six and a half feet for a strong, challenging run.

The first section is the easier of the two. Beginning at the rail yard in North Creek, it covers easy class 2 rapids for a couple miles. Three stretches of gradient follow, ranging from about a hundred to four hundred yards. Just before Riparius, you pass through the Spruce Mountain rapid, which is nearly a mile long.

The Riparius-Glen section begins with flatwater, though it moves at a good clip. Then comes a series of wide, boulder-strewn descents and ledge drops. Z Ledge, named for the shape of its main route (left of the river’s center), is the third drop, and it’s hard to see until you get close. Next up is Race Horse—or Horserace, depending on which old-timer is talking—a half-mile or more of boulders and big waves. It’s a hoot.

After Race Horse, spin around for a gorgeous view back up the river. Another flatwater stretch brings up a small rocky island that is best passed on the right because it has a great surfing wave and a nice lunch spot. You’ll run class 2 water the rest of the way to the Glen. Take out on the left above the Route 28 bridge (parking is off Friends Lake Road, a k a County Route 8) or at a state site on the right a quarter-mile below the bridge (parking is on River Road).

The Schroon is scenic and easily accessible—just try not to irritate the fly fishers as it is one of their favorite haunts too. Often this is a late-spring run, largely because the water stays at a good level well into the season.

From the Starbuckville Dam on Schroon River Road to the standard take-out at Riverbank (essentially, Exit 25 to Exit 24 on the Northway), you can enjoy about six and a half miles of class 2 and lower-end class 3 rapids, broken by flat stretches.

When the water level is moderate, some paddlers start at a midpoint at a fishing-access site on Schroon River Road, because the upper section of the river will have long, slow stretches and only one substantial rapid. That rapid, however, is a load of fun if the gauge at Riverbank is at four and a half feet or more.

Downriver from the midpoint are long, brisk rapids broken with short flatwater stretches, all of it through conifer forests (with tons of poison ivy on the banks) and a gentle valley. Camps and residences dot the river, and regrettably, the Northway is audible much of the time.

About two miles from the midpoint, the river turns sharply right around a sandy flat with private picnic tables. It is a good idea to scout the last significant rapid from the left bank here. This rapid, commonly known as The Drop, gets nasty only when the gauge reads five feet or so, but if you’re unfamiliar with it, you should take a look.

The takeout at Riverbank is on the left. It’s a half-mile up a dirt road from County 11.