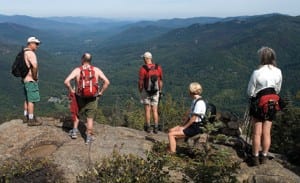 Hikers take in the view from the top of Noonmark. Photo by Barry Lobdell

A hike up Noonmark Mountain offers the experiences of a Great Range expedition in a compact, half-day excursion. You ascend through the mixed hardwood forest of the lower elevations, then the conifer woods, and on to an open rocky summit. The trail progresses inevitably from moderate pitch to steep scramble, just like the routes to the big guys—only the stages are measured in fractions of miles.

And best yet, the 360-degree view from the summit is as spectacular as from any peak in the range. Hiking companions who had just gained Forty-Sixer status vouched for the fact that you can trek three times the distance to gain a peak with nowhere near the visual reward we earned on Noonmark.

We were a sizable expedition team for our mid-September outing. Along with new Forty-Sixers Judy and Steve, the group included veteran hikers Dick and Rachel, photographer Barry, and myself, the guy with the creaky knees.

After parking in a nearly full public lot at the Ausable Club, we walked a quarter-mile along the club road between the golf course and cabins looking up to the slides of Giant. We posed for our base-camp photo with Noonmark rising behind us. The peak is the distinctive pointy crag well known to drivers of Route 73. Its name comes from the fact that from Keene Valley the sun appears to sit directly above the peak at noon.

Hikers were setting off in numbers for the various trails starting at the Ausable Club, but at 9:30 we were the first to sign the register for the Stimson Trail up Noonmark. Though we met several parties in the course of the day, the trail was ours alone until a pair of faster hikers caught up with us near the summit.
I’m sure that at the same time farther up on Route 73, the trailhead to Cascade was hosting a throng heading to that most accessible of the forty-six High Peaks. 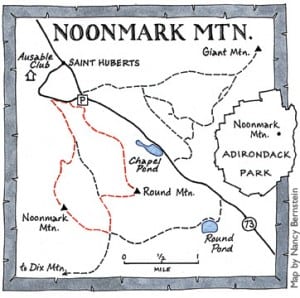 The temperature was in the mid-40s as we hit the trail, and fall color was beginning to show dark red along the mountain flanks.
The trail begins as a moderate climb along a dirt road, then veers to the right beyond the last home. Climbing gradually, we enjoyed the easy footing and soil cushioning of the trail. A quarter-hour in, we crossed the boulders of a dry brook. I paused to pick up an empty Saranac Pale Ale bottle perched in a tree branch, the one blemish on a high-quality wilderness trail.

Five minutes later, 0.6 miles from the trailhead, we came to a junction. Straight ahead, the yellow-marked trail threads the pass between Noonmark and Round mountains and leads to Dix. The Stimson Trail bears right and starts to climb more steeply.

You don’t find named trails like this commonly in the Adirondacks, but there are several in the vicinity of the Ausable Club. Henry L. Stimson, a club member, was FDR’s secretary of war. Those of us who continued on from Noonmark to loop over Round Mountain spent some time on the Felix Adler trail, honoring a noted philosopher of the late-nineteenth and early-twentieth centuries, who was one of the founders of the Adirondack Trail Improvement Society in 1897.

Stimson earned his honor, according to ATIS Executive Director Tony Goodwin, by laying out the trail in the 1930s.

After negotiating terms of the Japanese surrender in World War II, Stimson was at the Ausable Club when the surrender became official, and he announced the news to members in the dining room.

The trail above the junction shows careful maintenance by the ATIS, which still oversees trails in the Ausable Lakes and St. Hubert’s region. ATIS crews hardened the trail in 2007 with boulder steps in some sections that make life easier for the hiker and reduce erosion. The same boulder engineering is used to make the occasional water bar, which diverts water from the trail and also helps prevent erosion. ATIS trail crews use hand tools and strong backs to first clear, then improve trails from May to August each year.

The trail became steep as we climbed from the junction, and a little over a mile into the trip we emerged onto open rock with views of the Ausable Club and Keene Valley. We continued to climb steeply. In two places, log ladders provide a direct way to scale ledges so hikers won’t take damaging detours into the woods. 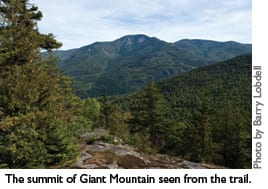 We moved from outlook to outlook, and the Great Range came into view, starting with Lower and Upper Wolf Jaws, Armstrong, and Gothics. Armstrong displayed a vivid white slide that, if we are to believe Dick’s tall tale, owes its color to a colony of ravens leaving their mark.

The final climb to the summit is probably the steepest section of the trip, and we clambered over ledges and outcroppings to reach the open mountaintop, a little over two miles from the start of the trail.
Here the views extend in every direction: the sweeping slides of Dix to the south, Dial and Nippletop farther to the west, facing the Great Range, including Marcy. To the east rises Giant, with its spectacular spreading slides, and to the north, Whiteface stands above its neighbors.

As we enjoyed a leisurely lunch, other parties arrived, but the summit remained uncrowded.

Half our party returned the way we arrived and finished the trip with plenty of time left in the afternoon. Judy, Steve, and I headed on to Round Mountain. We dropped off the summit on the Felix Adler Trail. As with the ascent, the steeps are concentrated near the summit with some open rock that we crab-walked down.

Just as the creaky knees began to assert themselves, the trail leveled off and we intersected with the Dix trail. We walked on a fairly gradual, knee-friendly descent for a little more than a half-mile to the trail up Round. The climb is moderately steep right off the bat, and overlooks give a view back at Noonmark, which from this angle doesn’t have the distinctive pointed appearance.

The views from the Round summit include more of the peaks south of Dix, including Hough and East Dix, as well as a picture-window view of Giant across the valley.

From Round, it’s a straight-shot descent at a consistently steep pitch to the parking area where we began. It’s enough of a workout for the knees to feel like rusty hinges but not enough to turn an enjoyable hike into a chore. Near the end, we got a final reward of views of Giant and the cliffs around Chapel Pond.

Even with the extension of Round Mountain, we finished our adventure before late afternoon, having looked into the heart of the High Peaks and returned with daylight to spare.

View all posts by Tom Woodman

Meet the Adirondack Council staff in the latest Behind the Loon blog! Megan Phillips, Vice President for Conservation, introduces herself after joining the Council earlier this year.........Read more.

It's been 11 months, 27 days since a celebration of the road salt reduction bill was held in Saranac Lake. So where is the task force?MORE
Your monthly donation now will support Adirondack journalism year round.
Donate Now