Home » Stories » Park Perspectives: Zen and the art of cairns 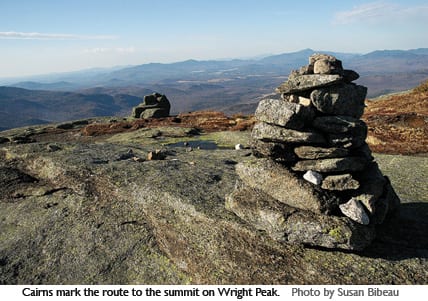 Consider the cairn. A pile of rocks. For the hiker, these are usually pretty simple constructs: Stones placed at intervals to show the best route across open terrain. They are balanced and arranged just enough to make clear they are manmade guideposts, not accidental heaps.

Many summits boast slightly grander stacks celebrating our arrival at the top. But even these in most cases are architecturally modest cones or columns.

Humble indeed are these piles of rocks, wouldn’t you think? Utilitarian and ad hoc.

But cairns have unseen depths.

Though the word is Gaelic in origin, the practice of arranging stones in the landscape seems to have occurred pretty much in any culture that could lay its hands on rocks. And the stacks of stones served many functions beyond marking hiking routes. Some cultures used them as memorials to the dead.

Others as astronomical aids. They can mark property lines or the sites of important events.

Even the simple trail-marking cairns embody values worth reflecting on. We place our trust in them and whoever stacked them as we scramble from one to the other. Maybe we can feel a sense of community and solidarity with those who came before us. Surely, if through mistake or mischief, a set of cairns would lead us over a cliff, someone would have set things right by the time we got there. We look out for each other.

A warning: Once you begin the contemplation of cairns, you keep spotting them. They appear far from mountain summits, in fields and forests and even residential areas. And once the idea is in your head, it can be hard to tell whether you are really viewing a cairn or your imagination is shaping one out of an accidental grouping. 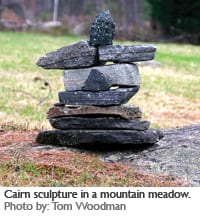 An arrangement of stones appeared on a dirt lane near my home. It seemed artful, a triangular stone sitting on a flat boulder and pointing to the sky, two small round stones resting in front of it. It’s located near the spot where a man died in a hunting accident last year. Could it be a memorial? It is also near the spot where my wife encountered a fellow heading into the woods to look for antlers. Could it be some antler-hunting symbol?

When all you have to go on are a few stones alone in the woods, there are no certainties, just intriguing possibilities. The very real possibility that this is not a purposeful arrangement at all doesn’t really detract from the pleasure of imagining what could be. (Though maybe I should be careful about admitting such woolgathering to just anybody.)

Farther from home, along another dirt lane I came upon what you could fairly describe as an art installation. Crossing a high valley, the lane passed by woodlands and a series of small meadows. Cairns were spaced along the edges of two of the meadows. Some were simple arrangements of two or three stones. Others were more elaborate, one a small tower of stones, another an abstract, vaguely human figure.

Stopping to look at the arrangements I realized that they related to large stones deeper in the field. Those, too, seemed arranged as artwork and to relate to the distant landscape. One thin obelisk had clearly been placed by a person.

But a grouping of boulders by a tree was ambiguous. If not for the other cairns, they would appear to be just leftovers from field-clearing. But the cairns led me to think about these boulders differently and to find some artistry in the way they sit in a meadow surrounded by mountains.

Again, there are possibilities without a clear message. But in this case, the viewer could comfortably view this as an artistic experience.

Many formal artists have made the Adirondacks home and have drawn inspiration from the landscape for their canvasses and sculptures. Viewing their work, we know that it is art and consciously experience it that way. This cairn-work is less clear and more elemental than that.

The meadow installation is rustic and simple and doesn’t show aesthetic refinement. I could sense that someone had shaped the environment through piling stones in certain ways and my appreciation of the landscape was richer because of that. But the creator’s message remained a mystery.

There’s a home by the field, and I could have tried asking there about the cairns. But I thought it better not to.

We want to be clear about the meaning of a cairn on a rocky summit. But we can enjoy the ambiguity of rocks arranged in an Adirondack meadow.

It’s thought that cairn is derived from the same ancient Indo-European root, ker, that gave rise to the Latin cornu, meaning “horn” (as in cornucopia). Pronunciations of cairn differ, depending on whether the speaker says the “ai” short, as in car, or long, as in care. Merriam-Webster’s prefers the latter.