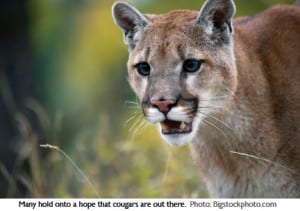 There’s something that pads through the forest in low light, moving just in and out of sight. It blends with the trees along a back road near Newcomb. It’s a fleeting presence at the edge of a field by Thendara, just a hint of shape, a phantom made real as much by our yearning as by our eyes. Maybe we’ve seen a cougar.

It’s the essence of wildness, the ideal of the untamed that has a strong hold on the imagination of so many. But is it real, this big cat, or the product of our imagination, the embodiment of a hope so strong that it can turn the image of a bobcat, a dog, or even a house cat into the conviction that we have seen a mountain lion?

The question of whether the Adirondacks support a population of cougars (also called mountain lions, panthers, painters, pumas, or catamounts) has been the subject of lively debate, including in the pages of the Explorer, for years. Though many don’t want to hear it, the experts are as sure now as they have been for decades: there is no wild cougar population in the Adirondacks.

“We’re as certain as can be that there are no mountain lions in the Northeast,” said Mark Dowling, director of the Cougar Network, a group that conducts research on the animals across the country.

But that’s not really the end of the discussion. Even in the absence of the cats themselves, the very idea of cougars stalking prey through these woods has a powerful appeal for many people. And that means something about our relationship with nature.

A wilderness that is home to such predators somehow seems more authentic. We respond viscerally to the exotic danger the mountain lion embodies and the sense that in wilderness humans are not masters We share space with creatures who stand aloof, who are indifferent to our interests, and who have an authority of their own.

Not everybody shares this elevated notion. Those who insist that cougars are present have a variety of world views. Some are conspiracy theorists who believe cougar sightings are evidence of a secret plot by government or environmentalists to introduce the endangered species and thwart development. Others no doubt see the cats as prey themselves, a challenging species to track and kill.

But for many of us, the widespread hope that the cats are out there represents a change in our relationship with wilderness. The reason there are no cougars in the Adirondacks now is that man overcame nature so thoroughly in the nineteenth century. Habitat was destroyed. The cats were seen as dangers to people and threats to civilized ways, and bounties were offered. Cougars were extirpated—a brutal word for a brutal fate.

Now, if we no longer view nature as something to struggle against, we can be comfortable with the idea of the wild.

The Cougar Network presents a map of confirmed cougar sightings since 1990 on its website and is rigorous in its standards. The map moves from solid green regions in the western United States where there are established populations to scattered spots in the Midwest to a scant four dots in the Northeast.

But wait! Here’s a thrill. I dig into the story behind the solitary dot in New York State and learn that it records evidence of a cougar in my own neck of the woods. Granted, it’s an indirect confirmation and it’s from 1993, but it comes from Keene Valley and it’s a gripping tale. (The Explorer published a full account of this case in the January/February 2006 issue).

In October, Ed Reed, a biologist with the Department of Environmental Conservation, heads into the forest near Beede Road with two hunters who say they saw a cougar. They investigate the carcass of a deer that the hunters had discovered after seeing the mountain lion. They find the deer, covered with debris, and Reed performs a kind of field autopsy that leads him to conclude it was a cougar victim. Puncture wounds in the neck are nine inches apart and the injuries are severe, including a broken neck. The carcass is half eaten, though it has probably been dead for only two days.

Hold on, though. It seems it is Nature red in tooth only. According to Reed’s report: “The lack of claw marks on the back and shoulders [of the deer] could mean that the cat is a declawed animal that escaped or was released from captivity.”

Nuts. That makes a difference. Maybe this wasn’t a case of humans peering into a primal world, a place where a fierce and resourceful breed somehow survived annihilation a century earlier. It was just evidence of humans meddling again with wild nature, declawing it, trying to possess it, then losing or abandoning it.

This happens, apparently. There is a black market in cougar kittens sustained by the greedy and arrogant. There is little reason to celebrate the cats’ winning of freedom. Declawed cougars do not fare well in the wild. When biologists find their carcasses, DNA studies often find they are from South America.

I wonder if this idealized yearning for the cougar would disappear if indeed there was a breeding population. With humans and cougars sharing space would the humans revert to a bounty-hunting, shoot-on-sight mentality like what prevailed a century ago? Would fear of cougar attacks on livestock, pets, or even humans overpower the values we place on truly wild nature?

In areas where we encounter dangerous wildlife, whether cougars, wolves, or grizzlies, the co-existence is tense. Are we better able to embrace a wildness that’s ghostly and distant than one that’s dangerously real? Maybe, but the fact that we’re stirred by the possibility of cougars is part of an evolution that has seen the return of the eagle and the moose to the Adirondacks. Wild cougars may not join these other embodiments of wilderness, but the thought of them can help sustain those who would welcome their return.

View all posts by Tom Woodman