Or you can free your mind to roam as you chug across the waterway. Let the Civics, Fiestas, and 4-by-4’s on the deck dissolve in your imagination and be replaced by rustic passengers in the rowboats and canoes that plied the crossing when ferry service began in 1759. Or picture those that crowded onto the sailing scow that went into service in 1800. This is the grand sweep of time through the generations, played out under the gaze of colonial Fort Ticonderoga, which played key roles in the formation of this country.

There aren’t many ferries like this one, which floats vehicles between Ticonderoga, NY, and Shoreham, VT. Consider how it works, for starters. The ferry deck is actually a ninety-four-ton barge with room for fifteen to eighteen cars: the Fort Ticonderoga II. The engine is a sixteen-ton, diesel-powered tugboat, the Addie B., moored to the side of the barge.

The Addie B. has no helm. Two one-and-a-quarter-inch cables salvaged from ski lifts and stretched across the lake bed keep the tandem vessels on course. Anchored on either side of the 2,300-foot crossing, the cables pass through wheels on the underside of the ferry, rising to meet it as it crosses, then sinking twenty-four feet back to the bottom.  Though allowing some slight drift with wind and current they ensure that each trip ends precisely at the loading dock. The captain doesn’t steer, just handles a throttle. Owner Michael Matot said he knows of only two other ferries that use this design, one in Maryland and the other in Canada. 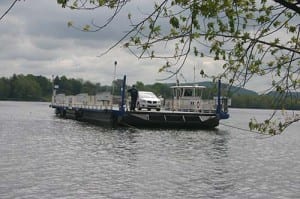 A plaque aboard the barge celebrates the site’s history, saying it’s the oldest ferry crossing in North America. Lord Jeffery Amherst, commander of British troops in the French and Indian War, established the ferry crossing in 1759 to connect forts on Lake Champlain with those on the Connecticut River.

An historic marker on Larrabee Point, the ferry’s landing on the Vermont side, commemorates the regular ferry service begun in 1823 by tavern owner John Larrabee. The crossing became a busy commercial route and among other things provided a way for Vermont ranchers to transport Merino sheep westward. This trade apparently had the unintended consequence in later years of undermining Vermont’s own wool industry in the face of western competition.

Matot’s story on the ferry is much more recent. For ten years, while operating an orchard at the top of the hill in Shoreham, he had helped out when it was time to move the ferry on shore for winter or launch it again in the spring. In 2009 he and his wife, Alison, bought the business.

“Why? I guess because there’s not a whole lot of them around,” Michael said. “They tell us this is the oldest cable ferry left in the country.”

The Matots didn’t have the luxury of a gradual learning curve. On October 16, 2009, New York and Vermont officials closed the Champlain Bridge between Crown Point, NY, and Chimney Point, VT, north of Ticonderoga due to structural flaws.

Michael remembers that day vividly. “I was up at the orchard and [ferry captain John Porter] calls me and says ‘You better get down here. There’s a problem.’ And I said what do you mean?  And he said, ‘I don’t see the end of the cars.’

The Fort Ticonderoga II normally operated on a ferry version of bankers’ hours, closing at 6 p.m. Not then.

“The first night we were here until 10 getting all the cars across,” Matot recalled. “I had to call friends and get generators and lights just so we could keep going at night. Then we had to get up at 4 the next morning and do it all over. We’d come down in the morning and there’d be people here sleeping.”

To meet the overwhelming need, Matot operated the ferry months beyond its usual seasonal close at the end of October. The booming business brought revenue but also problems. “The cold water ruined our engine,” said Matot.

On an easy-going May day, though, being a ferry operator seems like an enviable line of work.

“It’s very relaxing,” conceded Matot. “Look at this ride. People come out and take pictures. You can hardly see any buildings.”

You might think that going back and forth on the same cable-controlled course all day, not even being asked to steer, might get a little boring. Not so.

“You don’t because every trip is different,” Michael said. “Every person comes from someplace different and they tell their story.”

Being able to chat up ferry customers is an attraction long recognized at the crossing. Back in 1835 no less a raconteur than Nathaniel Hawthorne remarked on its pleasures.

According to the Larrabee Point historical marker, Hawthorne wrote of: “the continual succession of travelers who spent an idle quarter of an hour in waiting for the ferry boat, affording me just enough time to make their acquaintance, penetrate their mysteries and be rid of them without the risk of tediousness on either side.”