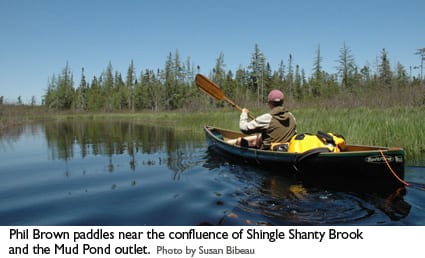 The Brandreth Park Association is digging in its heels against those who contend that the public has the right to paddle through private land to avoid a mile-long portage between Lilypad Pond and Shingle Shanty Brook in the William C. Whitney Wilderness.

Judson Potter, the association’s president, says in a letter to state Environmental Conservation Commissioner Pete Grannis that the canoe route has never been open to the public and should not be now.

Potter wrote Grannis in October in response to a demand by the Sierra Club that the state Department of Environmental Conservation force the association to remove a cable strung (with no-trespassing signs) across Shingle Shanty Brook at the boundary between state and private land.

The Sierra Club had written Grannis in August, partly in reaction to an article published in the July/August issue of the Adirondack Explorer. In that article, I described my paddle through the waterways in question, which are posted by the association.

In his letter to Grannis, Potter argues that my article is tantamount to an admission of trespass and “an invasion of Brandreth recreational rights.”

“The Association is now on notice that Mr. Brown has chosen to attempt to redefine navigability and landowners’ rights outside the historical constraints of existing common law,” Potter says.

The Sierra Club, however, argues that the common-law right of navigation allows the public to paddle the canoe route. “DEC should order the Brandreth [Park Association] to remove the cable and intimidating signs from the State’s right-of-way where they have long been a threat to paddlers and a hindrance to navigation,” the club wrote to Grannis.

I canoed the route in May as part of a two-day trip from Little Tupper Lake to Lake Lila. Upon reaching Lilypad Pond, I could have portaged to Shingle Shanty Brook along a trail that cuts across state land. Instead, I paddled through private land, going from Lilypad to Mud Pond, down Mud’s outlet to Shingle Shanty Brook, and down the brook to the cable at the state-land boundary (and thence to Lake Lila). Altogether, it took me an hour and ten minutes to paddle through the private land. Except for a brief portage around some rapids, I was in my canoe the whole time. (The common law allows paddlers to carry around rapids and other obstacles.)

Since my article appeared, the association has put up no-trespassing signs in the channel between Lilypad and Mud ponds, strung a rope with similar signs across a narrow section of Mud Pond, and placed motion-sensitive cameras in two places, according to John Caffry, a Glens Falls lawyer who paddled the route in early October.

“If I had known they were going to take my picture, I would have shaved,” Caffry joked.

Caffry represented the Adirondack Mountain Club (ADK) in a landmark case in which the Court of Appeals, the state’s highest tribunal, ruled that the right of navigation encompasses recreational paddling. The ruling came after the Adirondack League Club sued canoeists who paddled down the South Branch of the Moose River through posted land.

Caffry said he has “no doubt” that the Mud Pond-to-Shingle Shanty route is navigable, as defined by the law, and thus should be open to the public. He argues that the cable and rope on the brook and the pond are illegal. “They are obstructing a public waterway,” he said. “It’s just as if they put a cable across a public street.” 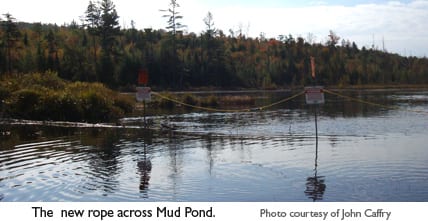 But Dennis Phillips, the lawyer for the association, contends that the fact that the state built a portage trail between Lilypad Pond and Shingle Shanty Brook shows that the state itself believed the canoe route was not open to the public.

Furthermore, he said the waterways have no history of commercial use, which is one thing courts look at in weighing whether a pond or stream is “navigable in fact”—the legal term for a waterway open to the public under the common law. “Just because a canoe can run over a body of water, that doesn’t necessarily satisfy the legal test of navigability in fact,” Phillips told the Explorer.

Potter’s letter to Grannis makes several other points against the public’s right to paddle the canoe route. He contends, for example, that only a court—not DEC—can determine whether a waterway is navigable in fact. He also says paddlers could interfere with scientific research on the property.

The 15,600-acre tract is owned by the Friends of Thayer Lake, which set up the Shingle Shanty Preserve and Research Station to conduct scientific studies. In the letter to Grannis, Potter says the Brandreth family owns the property’s recreational rights.

DEC spokesman Yancey Roy couldn’t say how the agency will respond to the competing requests. “We’re aware of the situation, and we’re studying our options,” he said.